The Daily Nexus
News
Students To Rally Against Rape Culture in Isla Vista
October 11, 2016 at 12:39 pm by Dana Dela Cruz

UC Santa Barbara students will march through Isla Vista on Friday to protest the prevalence of rape culture at the university and its surrounding neighborhood.

The rally will begin at 9 p.m. at the intersection of Pardall Road and Camino Pescadero. Katherine Kepski, a fourth-year global studies major and main organizer of the rally, said she believes rape culture and misogyny are “not discussed enough.” 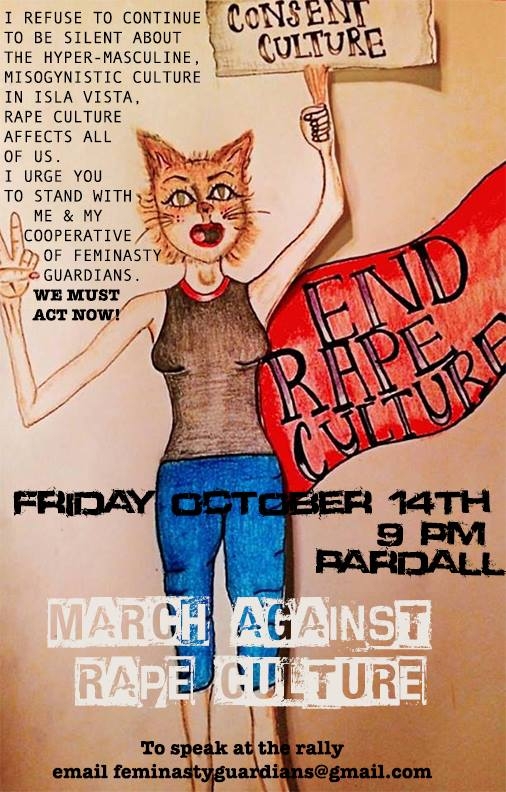 “Men joke about sexual assault. They catcall women. They act in a way that encourages sexual assault,” Kepski said. “This is not okay — that we continue to perpetuate rape culture in Isla Vista.”

Kepski was prompted to form the rally after an altercation occurred outside her I.V. residence on Sept. 16. According to Kepski, a man verbally attacked her as she attempted to comfort a crying woman, a victim of sexual assault. Kepski recounted this incident in a Nexus article.

“He called me an overweight lesbian and accused me of trying to lure the woman to my house so I could sexually assault her,” she wrote in her article.

She also recalled the dismissiveness of her “antagonistic, drunk” neighbors, who demanded her off their property as she attempted to console the woman.

Following the incident, Kepski and several other students, collectively known as the “Feminasty Guardians,” began to organize the rally with the assistance of the recently founded Santa Barbara Student Activist Network.

Other organizations, such as Take Back the Night, the Women’s Center, the Resource Center for Sexual & Gender Diversity and the Associated Students Queer Commission have also contributed to the rally.

The rally’s Facebook event page has received over 60 responses, with 60 others expressing interest. Kepski said she aims to “make a statement.”

The rally ends in front of Kepski’s house, where the altercation occurred. Kepski said she hopes that doing so will indicate to her neighbors that she “does not feel comfortable” with their actions and attitudes.

UCSB’s history of sexual assault-related protests includes a 13-hour sit-in of Chancellor Henry T. Yang’s office in May 2015, in which students demanded that the university improve its handling of sexual assault cases.

Friday’s rally marks the first sexual assault protest since May 2016, when students called on Yang to fulfill the demands he approved after the sit-in.

“Seeing that all these people care may make people think twice about their actions.”

But they’re femi-nasty dude, they know what they’re doing

The people, Yes!
Reply to  Anonymous

Anonymous
Reply to  The people, Yes!

That’s what they fucking call themselves, moron