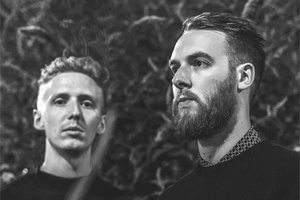 HONNE, a self-described “electric soul” duo hailing from England, will take the stage at SOhO Restaurant and Music Club this Tuesday, Oct. 11. The pair released their debut single, “Warm On A Cold Night,” in 2014 after meeting at a university in their home country earlier that year. Bandmates Andy Clutterbuck and James Hatcher have been writing and producing music for two years, putting out music they describe as “warm and sensual, late night vibes, serious baby-making sounds.” Their new-age romantic sound even parallels their band name: the meaning of HONNE is “true intention” or “true desire” in Japanese.

HONNE signed to the label Super Recordings in 2014, and later that year released their EP “All In The Value” on which Clutterbuck croons about the decline of a relationship over Hatcher’s mellow, ambient beats. Their artfully done visuals, albeit melodramatic, won “Best Music Video” at the London Independent Film Festival. Following the release of their “Coastal Love EP” in 2015, HONNE set out on a festival tour of England and Europe and performed on BBC: Radio 1’s Big Weekend. Their sound has been developing the whole time, leaning away from the sparseness of their early stages and developing into a fuller, more cohesive sound as they progressed as a duo. The developments in Hatcher’s production have been exciting and enjoyable to listen in on. HONNE has a lot to celebrate in 2016; they released their debut album “Warm On A Cold Night” on July 22 and embarked on their first North American tour earlier this autumn. HONNE has a growing fanbase and there is no end in sight. Their stop in Santa Barbara is not one you want to miss.

After a quick listen to their discography, you’ll realize HONNE’s self-description is spot-on. There is a quality reminiscent of James Blake in their production and an emotional wistfulness in HONNE’s voice, with lyrics inspired by the overt sensuality of 80s R&B legends. HONNE credits a lot of their musical influence to Michael Jackson, both in production style and in songwriting. That inspiration is evident; raw emotion inspired by the pop legend can be heard in both HONNE’s tracks. A comparison to Bon Iver’s new album would also be apt; their production style is similar and their lyrics are similarly themed, but HONNE’s tracks lean toward a more upbeat and peppy side, both in pace and emotion.

HONNE’s sensual, romantic and melodic sound made them a hit on the London nightclub scene, and their dynamic electronic production and soulful lyricism made them travel across Europe and beyond. Come see the magic being made in person Friday, Oct. 11.