Thursday’s match was a grueling affair, as both teams put forth tremendous efforts, leaving everything on the court. 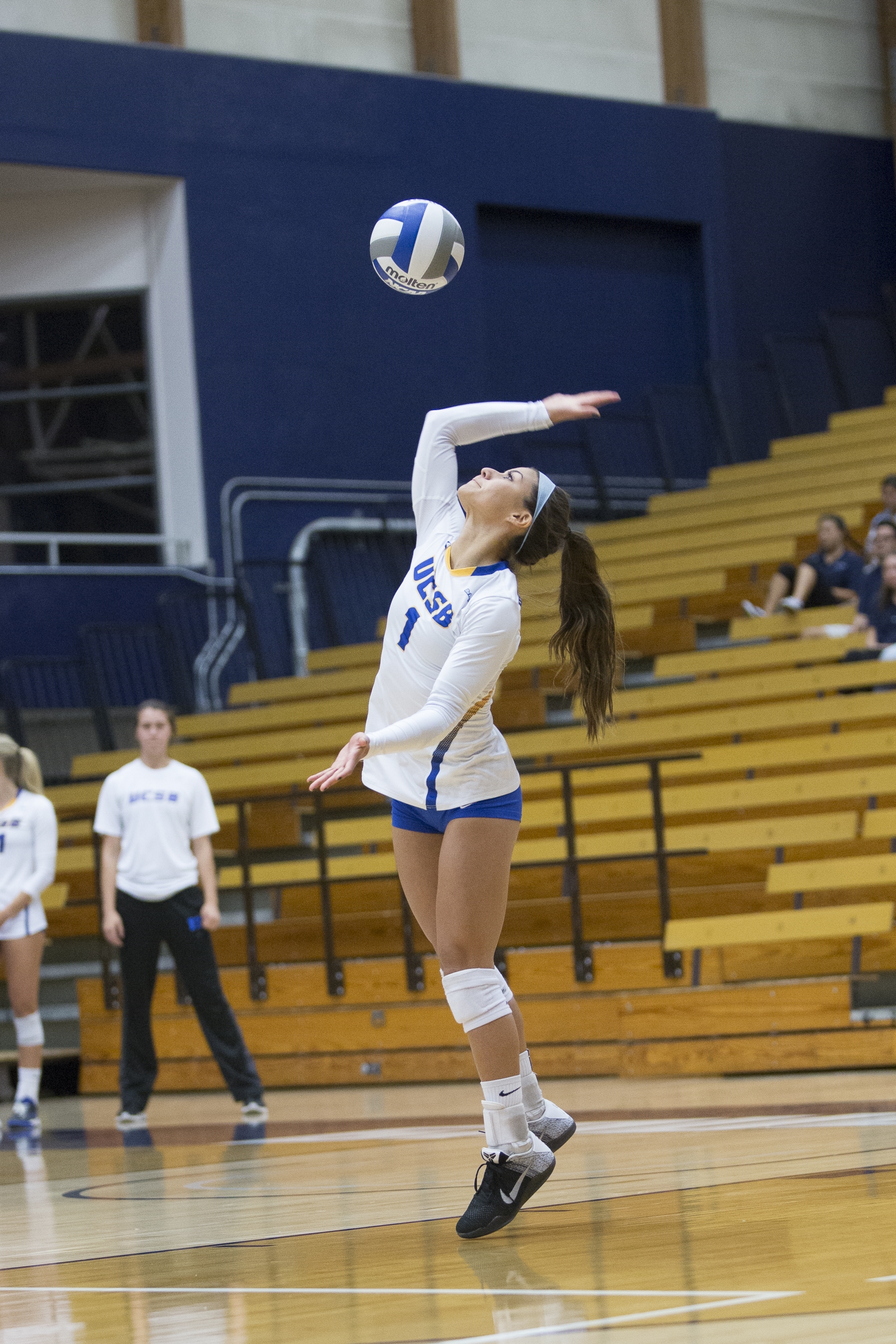 Despite UCD besting Santa Barbara in hitting percentage and errors in the first game, the Gauchos’ continuous flurry of attacks was enough to capture the frame.

The Aggies jumped out to a six-point lead at 15-9 and were able to maintain their distance from UCSB for the next few points. At 16-11, however, the Gauchos put up four straight and the teams were separated by one point until the set’s concluding score.

After going up 12-11 in the second, UCSB fell victim to a Davis eruption, as six different players scored seven points to put the Gauchos in an 18-12 hole.

Two Davis attack errors and a kill by senior middle blocker Elizabeth Sheffield gave the Gauchos a whiff of hope in the set, but UCD was able to stall the comeback and tie the match at one game apiece.

The third set saw the two team’s barbs early on, with UCSB taking the lead halfway through the game.

A trio of kills by freshman outside hitter Megan Rice, freshman middle blocker Rowan Ennis and junior outside hitter Chanel Hoffman, all of which were assisted by redshirt freshman Hannah Juley, coupled with a series of UCD attack errors, put the Gauchos on a 7-2 run, that ended up being the deciding stretch of the set.

With UCSB up 2-1, the final set was without a doubt the most exhausting of the four.

Neither team could gain much high ground early on as Davis and Santa Barbara both took the lead on several occasions.

Down 14-15, the Gauchos benefited from four UCD errors and a Chanel Hoffman kill to gain a four point lead, 19-15. UCSB would hold that lead until two kills and a service ace from sophomore outside hitter Brianna Karsseboom gave the Aggies a game-point opportunity at 25-24.

After trading scores, Elizabeth Sheffield’s kill tied the set at 26, and she and Chanel Hoffman blocked an attack attempt from Davis’ sophomore outside hitter Emily Allen to give the Gauchos a one-point lead.

Allen would slip up again, as her attack error on the next point would give the Gauchos a victory in their first match of the weekend, and propel them to 2-2 overall in the conference.

The Aggies had six players with double-digit points, paced by junior middle blocker Aima Eichie with 12 kills and 13.5 points.

UCSB was in the lead in points and kills by Chanel Hoffman with 17 and 15 respectively, and Hannah Juley was everywhere with 43 assists and 11 digs. Elizabeth Sheffield and Rowan Ennis were also vital to the Gauchos, scoring with 9 and 12 kills apiece, while defensive specialists sophomore Emilia Petrachi and redshirt sophomore Sydney Bast combined for 27 digs to prop up the defense.

Saturday’s matchup with Cal Poly featured more of the Gauchos’ bugaboos, as they were swept for the third time in conference play.

Cal Poly bested UCSB in hitting percentage in each of the three sets, reaching a wild level of efficiency with a .419 mark in the final game.

The match’s first set was as close as it gets, with both teams scoring in decisive outbursts. Cal Poly scored three straight early, only for UCSB to go on a 9-3 run.

The two squads were within one or two points for the majority of the match, and after a back-and-forth sequence brought the score to 24-23 Cal Poly, a devastating block from sophomore outside hitter Adlee Van Winden and senior middle blocker Taylor Gruenewald on Rowan Ennis gave the Mustangs a one-set lead.

Three Cal Poly kills again opened the next set, though the Mustangs had a much easier time maintaining their lead the second time around.

UCSB was held at a distance throughout the set, and despite a late run, including a kill by redshirt freshman Lindsey Ruddins that brought the Gauchos within two, successful attacks from Van Winden and junior outside hitter Raeann Greisen put the Mustangs up 2-0.

An early six-point run in the third set gave the Mustangs a 9-3 lead they wouldn’t relinquish for the remainder of the evening, as they played their best set of the match.

Greisen (.423 hitting percentage) and Van Winden (13 kills, 11 digs) were the offensive fulcrums for Cal Poly, while sophomore libero Katherine Brouker contributed heavily on the defensive end with 14 digs of her own.

Chanel Hoffman (13 kills), Rowan Ennis (nine kills, two assisted blocks) and Lindsey Ruddins (eight kills, .333 hitting percentage) all performed well for the Gauchos, as Ruddins at least was able to play in all three sets after seeing time in only two of the four on Thursday.

UCSB sits at fourth in the Big West, tied with UC Davis and CSUN with a 2-3 conference record.

The Gauchos will hit the road this weekend for a Friday match at UC Riverside and a Saturday match at Cal State Fullerton.