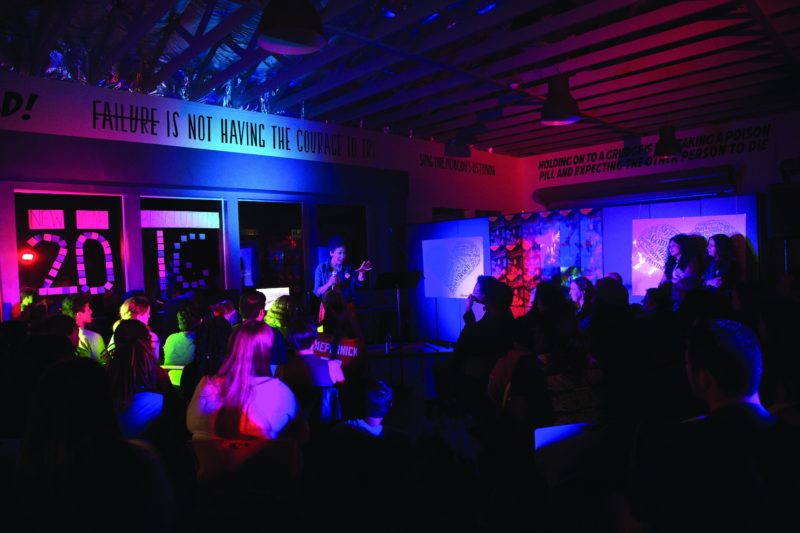 The small Isla Vista (I.V.) St. George Family Youth Center was loud, almost stifling, with the feelings, voices and expectations of over a hundred people filling the space, awaiting the words of poet Sunni Patterson on Tuesday evening.

After a brief but impactful performance by a local UCSB poet/rapper Marquel Carnell, whose message underscored police brutality against black bodies, Sunni Patterson assumed the stage. Donned in a short afro and resplendent in a long, colorful dress that rippled in time with the energetic movement of her body, she began with a brief statement: “So we know this place.” By this Patterson was referring not only to the familiarity of intimate spaces of gathering where communities join together to listen, feel and connect as communities, but also highlighting the interconnected mix of identities melding together to fill the I.V. youth center as one audience.

Impassioned and vibrant, her eclectic first piece elucidated how the racist mentalities that engendered slavery and the dehumanization of the African people are inextricable from perspectives which normalize the exploitation of the Earth. Through tone, movement of the body and punctuated lyricism, Patterson conveyed the feelings of the hopelessness and fear that enslaved Africans must have felt when mashed together “like sardines” on slave ships or stripped of personhood on the auction blocks. Every audience member, whether seated on floor, in chair or standing, was entrapped in the web-work of her poetry. Snaps went off in response to the impact of Patterson’s message. Third-year black studies major Janet Del Masio whispered, “The air feels taut, like something great is happening.”

In the liminal space between performances, Patterson engaged the audience directly. First, she requested word callbacks, explaining her belief that “the power of a word persists in a space after you.” Compliant to her request, audience members called out words such as, but not limited to, “resilience,” “courage” and “euphoric,” and people grew exuberant at the opportunity to actively participate in the space.

In the moments before the transition to her next piece, the room was silent, rapt in the embrace of Patterson’s gaze. Her performance highlighted the intersectionality of struggle, moving the audience from sweatshops in China to those in Guatemala, from poverty in Haiti to that in Jamaica, urging them to dismantle barriers of difference in favor of our shared and interconnected human struggle. To reinforce her message, she explored the idea of a reality in which each person looked into the eyes of one another, stating, “Surely [the world] would be different if we looked at one another in the eyes” and requested requesting everyone in audience to try to see themselves in the eyes of the person next to them. For a couple of minutes, people truly looked at one another; the simple, maintained eye contact bred conversations and an emotional intimacy between friends, acquaintances and strangers alike.

Patterson’s message began and finished with passionate expression, drawing on her heritage’s own collective experiences to create something that emphasized “the universality of love.” Despite the specific nature of the cultural canon that inspired her own expression, her words shone through to all of her audience members and inspired empowerment and a will to rebel against hate and violence.

As she opened the room up again to discussion, an audience member asked her a simple question that added a new layer to her message. That question was whether she did art for herself or for the community, to which she responded that all art inherently existed for the artist, that the experiences and influences that act as the basis for their art are inherently unique to themselves, but the universal messages they convey are not.

She urged the crowd to discard the idea of the artist being a separate entity from the audience, stating that when you consider an artist making art for their audience instead of for themselves, it seems as though those in the audience can’t express for themselves; they need an external artist to say what they can’t. Patterson stated plainly in her expression that she doesn’t “see the separation between us.” Instead she is simply “looking at you so I can see me,” expressing herself for her own purposes and, as a byproduct, inspiring those around her with her powerful imagery and cultural experience.

Her distilled message to the wider UCSB community was to “believe in your power and celebrate it.” From beginning to end, the Sunni Patterson experience was one of empowerment, real world revelations of hate and violence and a metaphorical urge to create one’s own art and expression. It facilitated a genuine dialogue between speaker and audience with an interconnected flow of ideas not simply within her own mind, but throughout the crowd’s as well.