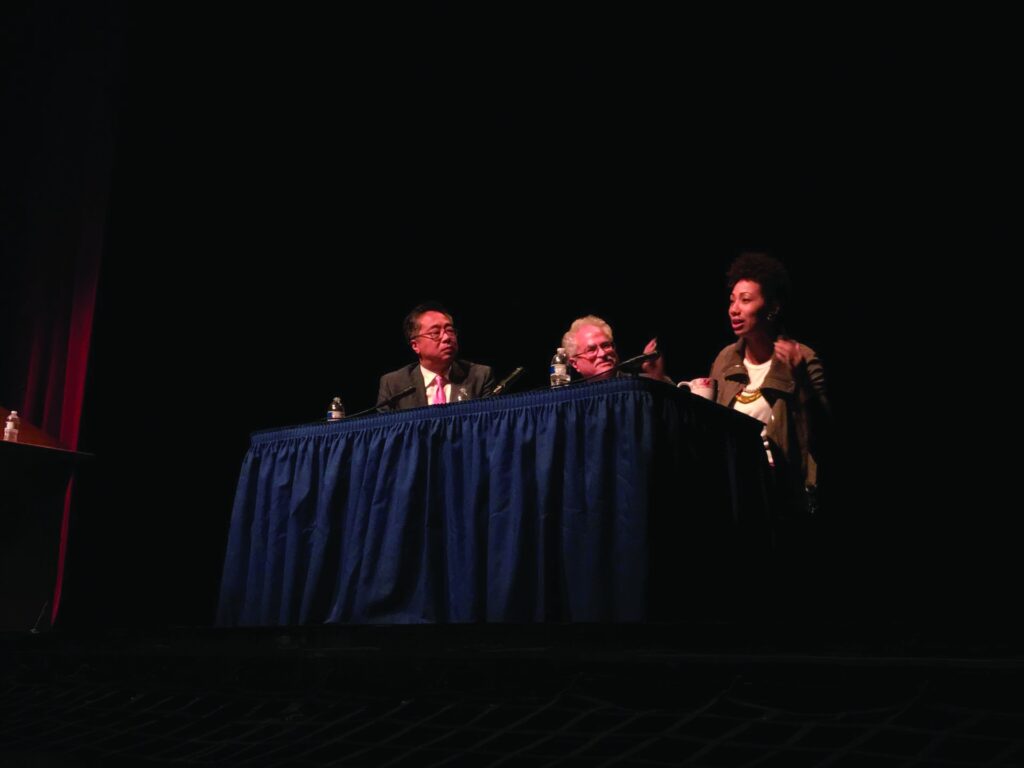 Kim spoke mainly on “love-driven politics” and the issue of hate in the election; Patterson performed poetry and spoke on black history. Soham Tikekar / Daily Nexus

Renowned minds in art and academia flew into Santa Barbara this week to discuss the concept of civility in the face of hatred and violence at UCSB Student Affairs’ newest series.

Award-winning spoken word artist Sunni Patterson and David Kim, the department chair of racial and religious studies at Connecticut College, were invited to UCSB by George Lipsitz, a professor of sociology and black studies.

Kim said he accepted Lipsitz’s request because Lipsitz felt there was a “brokenness” to the culture of the campus.

“There were incidents on the campus where racism and xenophobia were affecting the first-generation students,” Kim said. “We wanted to set a theme for the year about how might love be a way for the culture to heal itself.”

Their goal was to promote conversation and help inspire creative work, in addition to “letting seeds grow,” Patterson said.

The Wednesday event was held in the Lotte Lehmann Concert Hall in panel form. Lipsitz, as the host, asked questions while Patterson and Kim answered. The room was packed with students and visitors alike.

“Love-driven politics” was Kim’s main theme. He talked about the resilience of love in the face of hate and power struggles in the political scene. Using his own upbringing as an example, he started off with a word of gratitude toward the organizers of the event. He said he hoped the same sincere gratitude would be present in the political sphere.

Kim also talked about the culture of hate as perpetrated by the Trump campaign and the effects of such hate, including political gridlock in Washington D.C.

On the other hand, most of Paterson’s themes focused on her phrase “Freedom is now!” Using her cultural background for context, Patterson explored the history of African Americans.

She recounted her visit to Ghana in the early 2000s, where she was told of the plight of early African slaves who were stowed on ships “packed like sardines” with only the ability “to move your head or a foot.”

Another anecdote she shared was her own experience with pain, loss and lack of freedom during Hurricane Katrina. As a New Orleans native, she endured the storm personally, and it was the inspiration for much of her poetry. The idea behind the phrase “Freedom is now!” she said, is that one has to seize the moment.

A version of this story appeared on p.1 of the Thursday, October 6, 2016 print edition of the Daily Nexus.