The Daily Nexus
Science & Tech
Polymer Brush Growing Made Easier and Faster
September 29, 2016 at 12:55 am by Dana Jessen 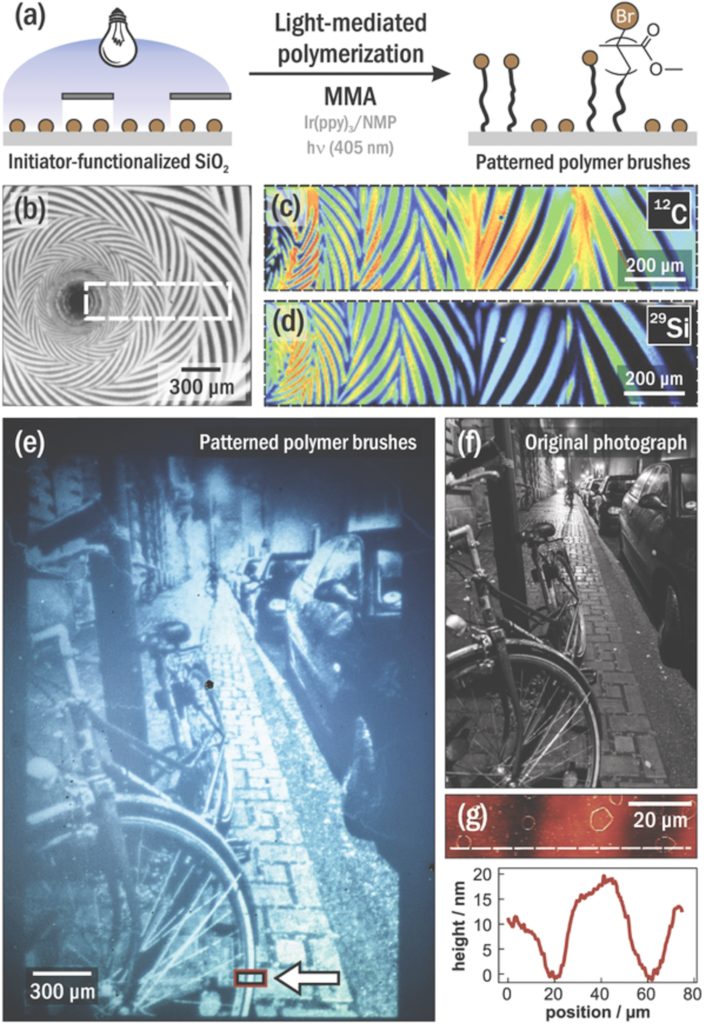 In the original photograph, (f), taken by Christian Pester, the patterned polymer brush that was grown was able to replicate (f) in extreme detail, as shown in (e). This reproduction illustrates the spatial resolution and complexity in the process. Courtesy of onlinelibrary.wiley.com

A team led by Christian Pester and Craig J. Hawker of the Materials Research Laboratory at UCSB has recently invented a new process called sequential stop-flow photopatterning to create complex micron-sized, polymer brush-based surfaces on objects at an accelerated rate.

“A polymer brush is a very long molecule made up of monomers and is attached on one end to a surface. When the polymer chains are attached very densely and close to each other, they allow it to modify surface properties uniformly, such as antimicrobial or antifouling coatings,” Pester said.

Pester’s research is taking the idea of chemical patterning with polymer brushes to the next level by developing, as Pester describes, “the ability to make multiple properties” on the same surface on a shorter time scale.

How does the sequential stop-flow photopatterning process of creating multiple, different polymer brushes on a single surface work? Pester described the traditional process with an easy metaphor:

“You can think of [polymer brushes] as grass. You lay down the seeds, and the areas where the light shines down, you have grass growing. So [previously], they would deposit seeds, then grow roses and then deposit seeds again and grow tulips after.”

However, with Pester’s sequential stop-flow photopatterning method, one can put down the very exact same seed, but now they would be able to control it in order to grow a rose in one place and a tulip in another.

“Now we can start from one type of seed and grow all these different types of materials. The repetitive steps of ‘seed-then-grow, seed-then-grow’ are eliminated. Now we seed once and grow from there, which makes it faster,” Pester said.

By utilizing a light-mediated method to grow polymer brushes faster, and by circumventing the redeposition of ‘seeds,’ this new method significantly reduces the time it takes to grow a polymer brush-covered surface with multiple different properties with spatial control.

Although the overall concept of making polymer brushes was already well established, these recent developments, published in the journal Advanced Materials, not only speed up the general process but also increase the complexity of the patterns that are able to be created through polymer brushes in a cost and time efficient way.

“We actually got motivated in the area of antifouling to prevent algae from growing on ships. Literature suggested that mixing hydrophilic regions next to hydrophobic regions on a surface will deter the algae from attaching because the surfaces would appear too complex to attach to,” Pester said.

Being able to increase complexity as well as reduce product development time and costs is very important when researching applied methods such as this.

“If you ask me the big picture question for incoming students, I would tell them to get this research into real-world applications because polymer brushes are really fascinating. The patterns we can make with patterned brushes, for instance, have been shown to guide neuron growth. They’re really powerful tools, but they haven’t really made the jump to industry yet. They’re still a very academic endeavor,” Pester said.

The actual mechanism of sequential stop-flow photopatterning is a little bit more complicated than the garden metaphor.

Shown above is the seed growing metaphor Pester used earlier. Isloating the cells in the enclosures above allows for reactants to interact with the environment and causes chemical reactions to take place. The polymer chain now grows in the same location where the cell originally was. This process streamlines the production of chemically patterned surfaces. Courtesy of onlinelibrary.wiley.com

According to Pester, “You have a substrate, [which is] the initiating species or seed, and then you flow in a solution of monomer A. Wherever we shine the light, monomer A grows. Then we clean the substrate with a solvent. [Next], we flow in monomer B, shine the light in a different location and it will grow.”

For this process, light is the catalyst which drives this growth of polymer brushes. The benefit of Pester’s process is that it is modular, so they can exchange the light source at any time to use any wavelength they want.

This entire process can be performed in normal conditions at room temperature with very small volumes of solutions, and yet gives access to results never accessed before.

As one of his extracurricular hobbies, Pester describes how he can take a photograph of the campus and then reprint it and all its details with resulting features smaller than the width of a human hair.

In terms of biology, this method gives rise to the potential of developing a simple chip with multiple different bio-linkers patterned on it each of which only reacts to one type of molecule in order to screen individual parts of that biological model, such as for proteins or antibodies in blood.

“[This is] something I love to highlight in the interdisciplinary effort on this research,” Pester said. “We have mechanical engineers, we have physicists, we have chemists, we have materials scientists … That’s what I think is valuable. I made a conscientious effort to expose myself to different types of research [with this project], and I can only encourage others to do the same. I think that if you just focus on one area, then you’re missing out on so many opportunities. Interdisciplinary research is going to open a lot of doors.”