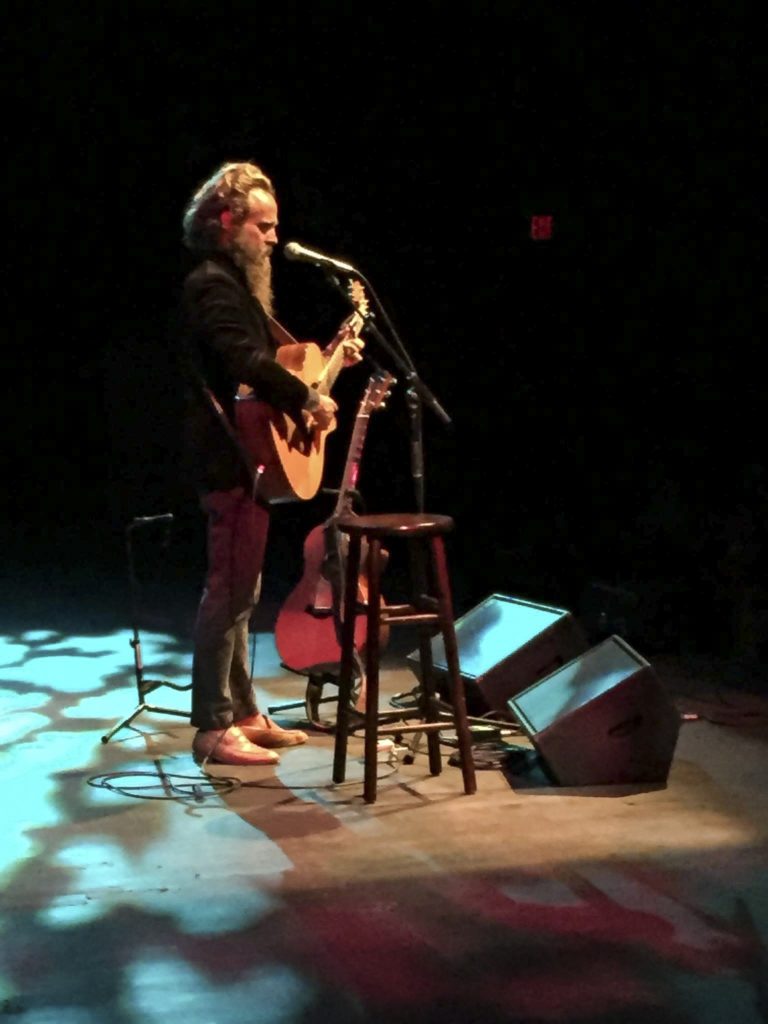 Making his Santa Barbara debut on a warm autumn evening, singer-songwriter Sam Beam stepped onto the stage of UCSB’s Campbell Hall accompanied only by two acoustic guitars, a wooden stool and a half-full glass of cherry-colored wine. The perennially bearded singer, clad in a velvet jacket, humbly welcomed the excitable applause from the audience, visibly excited to be in a new city. Almost every seat was filled of the sold-out show, and most seats were filled by non-student members of the community. The house lights were dimmed to almost nothing throughout the entire audience, and the stage lights cast a delicate glow on Beam’s face.

“I don’t have a setlist,” the musician cooed lowly into the microphone while putting on one of the guitars. He then welcomed requests, prompting polite shouts from the audience for music old and new. As familiar titles floated up to the stage, he nodded with a smile, finished tuning his guitar and began picking out a soft bass line. It was clear that he decided to begin with an acoustic, slow-tempo version of “Boy with a Coin,” a single from his 2007 album The Shepherd’s Dog. Faces were difficult to see in the audience, but the feeling in the room indicated a concentration on only what was happening onstage. There was no chatter amongst the many couples, and there were no phone screens alight.

Every quiet moment brought about more song requests from the audience, and in a moment of being a fan and not a writer, I was happy to hear “Such Great Heights” being shouted aloud, a personal favorite. It is a gentle cover of a track by The Postal Service, featured in the movie “Garden State,” the soundtrack for which brought a handful of indie artists to the mainstream during the early 2000s, including Iron & Wine. Staying aligned with his folk roots, Beam himself has developed his own style of gentle fingerpicking over the years, thickening the sound by slapping the side of his hand against the body of the guitar for a sort of makeshift percussion. His charming mix of a southern drawl delivering worldly wit matched the crowd, creating a strong sense of both comfort and intimacy that settled over the room.

‘The Iron & Wine Buffet Show,” the lone singer jokingly christened the night, keeping the entire show open to audience suggestions. Only debuting two newer songs, this night was, of course, meant to please longtime listeners. “Tree By the River,” a fan favorite performed at almost every Iron & Wine show, was the next request fulfilled. It is just one of many songs that showcase Beam’s skill for crafting effortlessly spun tales of front porch, lazy sun love. His voice covered the hall like velvet, almost identical to the rich softness of his recordings.

Graciously exiting the stage, Beam left the audience giving him a standing ovation, calling out for more. He obliged, thanked the audience once more, and slowly began his encore song, “The Trapeze Swinger,” a nine-minute indie-folk opus from his 2009 compilation Around the Well. He promised to fulfill the requests not acknowledged during the show another time, seeming to make a roundabout promise to return to the city soon.

“It was a mellow, emotional set, but definitely captivating for the whole audience,” Galen McDougal, a Santa Barbara local, said, presumably echoing the sentiments of the entire audience.

The set was nearly two hours long, which is lengthy by most standards, but “he could have just kept playing tonight and that would have been amazing,” Lauren Perry, a Santa Barbara local, said. The gentle sounds of Iron & Wine beautifully ushered in the Arts & Lectures season, and the fall season itself.