The Daily Nexus
News
Homeless Students Get Access to Showers
September 29, 2016 at 12:29 am by Brian Baek 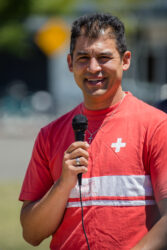 The bill outlines that the use of the shower facilities for homeless students must be scheduled to not interrupt campus gym hours, and can only be used for two hours per weekday. AB 1995 also requires the college to maintain records of the student enrollment in the program and to reach out to homeless students on each campus.

Existing law allows students to apply for waived enrollment fees when enrolling in community college. AB 1995 will require the waiver applications to include a question asking whether the applicant is homeless, beginning at the start of the 2017-2018 academic year.

Data from the 2015 Free Application for Federal Student Aid (FAFSA) shows that approximately 58,000 college students are homeless nationwide. The County of Santa Barbara contains one of the highest percentages of homeless students in California at 11 percent (second only to Trinity County at 13 percent).

Many local attempts have been made to alleviate this issue. Santa Barbara City College, for example, offers a wide array of services for students facing food insecurity and homelessness.

Assemblymember Williams worked closely with the bill since he was a homeless student himself. When he attended community college two decades ago, he lived in a vehicle and showered at the beach until he transferred to UC Berkeley.
In an op-ed article submitted to the Santa Barbara Independent, Williams said he believes hygiene and appearance is a large part of being present in school.

“This bill removes a major obstacle to attending class for some people,” Williams said in a press statement Friday. “Students won’t have to skip class because of personal insecurities or fear about class acceptance if they are able to shower on campus.”

By imposing a state-mandated local program, Williams said the bill is trying to get the community active in revitalizing the lives of students.

According to Williams, this bill would not have been introduced without the Student Senate for California Community Colleges (SSCCC) lobbying for it since it was introduced in February.

A version of this story appeared on p.1 of the Thursday, September 29, 2016 print edition of the Daily Nexus.