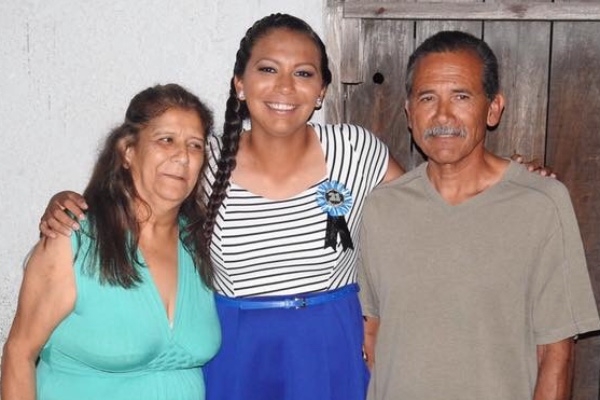 Marissa Chavez poses with her parents on her 21st birthday. Courtesy photo

A UC Santa Barbara student passed away on Wednesday in Long Beach after fighting a month-long battle with meningitis.

Marissa Chavez, who had just turned 21, was going to begin her fourth year at UCSB on Thursday. She was originally from Hawaiian Gardens, CA, and would have been the first person in her family to graduate from college.

“Yesterday the hospital was just full of all her hermanas, all her family,” Kim Morales a fellow member of Hermanas Unidas said on Monday. “We filled up two waiting rooms and the ICU.”

Chavez had recently begun therapy to start walking again after the debilitating effects of the infection, and “it caught us all off guard” that she had relapsed, Morales said. Friends and loved ones traveled to the hospital from all over California when they received the news.

“There was no one that wasn’t Marissa’s friend, because she was just so out there” Morales said. “We loved her for how awkward she was and how quirky she was and how funny she was.”

During her time at UCSB, Chavez was actively involved in Hermanas Unidas, a familial organization for Chicanas. Their logo is a quinto blossom, a symbol of a woman in the challenging, rewarding pursuit of education and self-growth.

“Marissa was a great part of our community. She brought so many laughs to all of our events,” said Nora Rosales, also a member of Hermanas Unidas. “She was strong, resilient and an amazing representation of our quinto blossom.”

The organization released a statement for Chavez Monday saying she “not only brought joy and happiness to our organization, but she brought hermandad to those that surrounded her.”

“She would always talk about how happy she was to be making her parents proud and how excited she was to finish school,” Morales said. “She’s not gonna get that chance anymore, and it’s really heartbreaking.”

Hermanas Unidas has planned a vigil in her honor at 8 p.m. on Sept. 26 in Storke Plaza. The vigil will be open to all community members, and Counseling and Psychological Services will be present at the event.

Morales also created a GoFundMe for Chavez on Monday, and supporters have raised over $11,000, surpassing a $10,000 goal to support her family.

“She was the DJ at parties because her playlists were lit, she was just such a versatile person,” Morales said. “She did not have a bad bone in her body.”

Students who are in need of mental health support can contact Counseling and Psychological Services (C.A.P.S.) at caps.sa.ucsb.edu or by calling 805-893-4411.

I’m pissed. she was a fucking baby in our org. I fucking hate god right now.

Fallen world…..do not cling to it…