The Daily Nexus
Sports
UCSB Hoping to Redeem First Loss, Face LMU and Pacific
September 22, 2016 at 5:01 am by Antonia Bird

The UCSB women’s soccer team got off to a phenomenal start for the 2016 season as it went 8-0 until the University of Texas put a stop to its undefeated streak by defeating the Gauchos 2-1 last Sunday. Still, UCSB remains strong ranking third in the current West region poll behind BYU and Pepperdine.

The Gauchos record now stands at 8-1 overall as they prepare to face the University of the Pacific this Thursday and Loyola Marymount on Sunday. Pacific enters the matchup at 0-6-1 overall. LMU comes into Sunday’s game sitting at 4-2-2 overall. 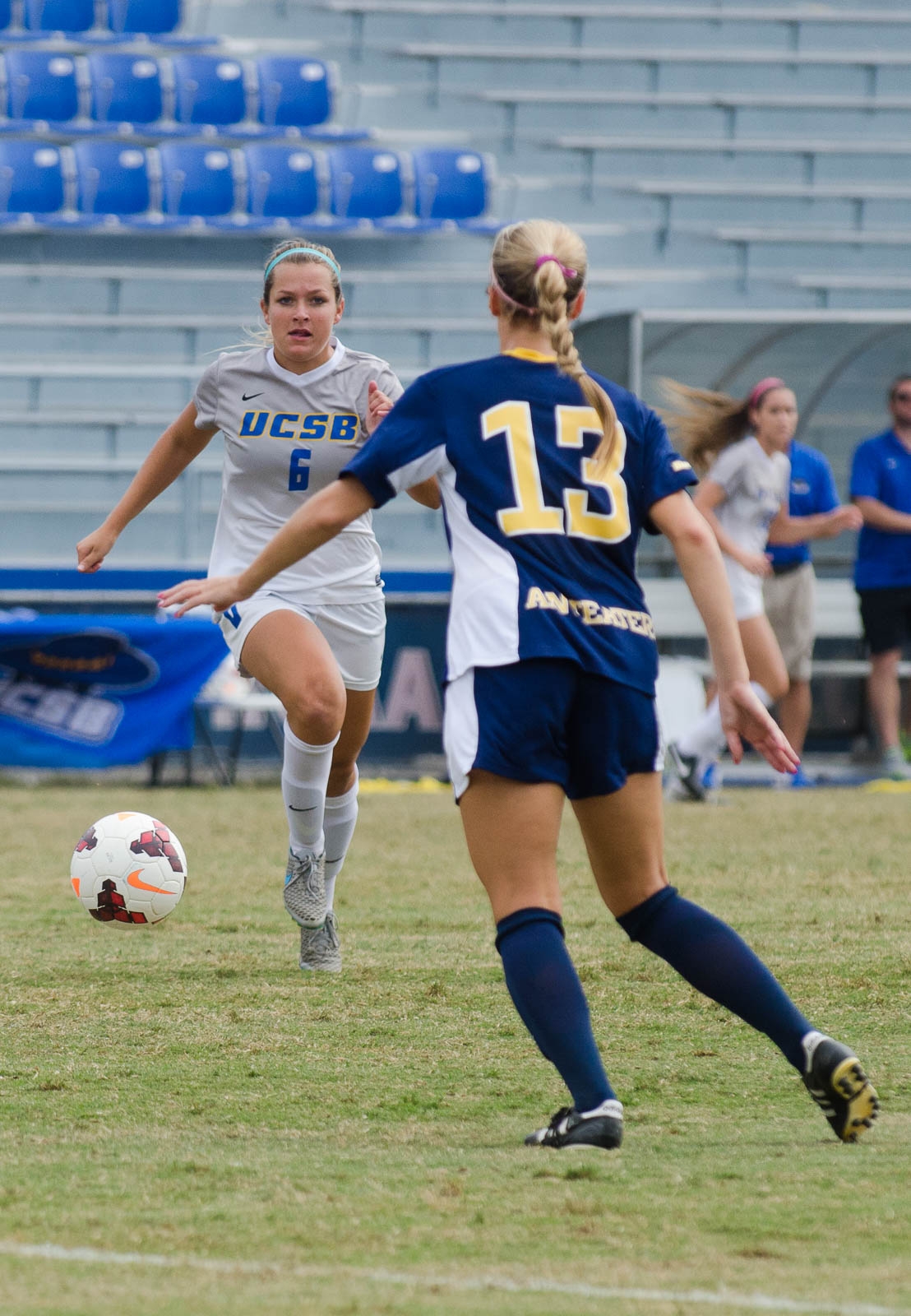 These are the final two matches before UCSB heads into Big West Conference play.

Although the Gauchos are coming off their first loss of the season, they maintain their dominance, especially on the defensive end. The team’s defense has been dominant so far this season, allowing only four goals this year.

Sophomore goalkeeper Brittney Rogers had not been scored upon all year until the Texas – San Antonio game last Friday, and Santa Barbara’s streak of six straight shutouts tied the school record set in 1989.

UCSB’s outstanding defensive line is led by senior Sydney Fuertes and junior Kate Shoemaker who have each started all nine games for the Gauchos. Also providing strong contributions are sophomore Ryan Kokoska and senior Savannah Francis.

The Gauchos also feature a strong offensive attack. They have scored 19 goals this year, averaging over two goals per game. Junior forward Amanda Ball leads the team and ranks second in the Big West with eight goals in the year. She also leads the team with 33 shots and 19 shots on goal to go along with a 57.6 percent shot on goal percentage.

Freshman forward/midfielder Shaelan Murison has also emerged for the Gauchos, coming off a spectacular hat trick performance against Texas – San Antonio last week. She now has four goals on the season, all coming in the last three games.

In addition, sophomore Mallory Hromatko has three goals this year and has taken 14 shots — six on goal — providing solid contributions along the front line.

Contrary to the Gauchos, the University of the Pacific has not fared well so far this season.

After being defeated 2-1 by UC Davis last week, the Tigers have scored only five goals in their seven games played this year and have tallied two assists thus far while possessing a subpar .077 shot percentage.

Pacific is currently led by its freshman midfielder Sigrid Aas who has two goals this season. She has taken 14 shots with eight of those on goal.

Junior defender Loren Landrus also has two goals for the Tigers this year with four shots on goal. The only other player to score a goal for the team is junior midfielder Lily Higashino.

Unlike Pacific, LMU has gotten off to a more positive start as it was able to put together a three-game winning streak earlier in the month with wins over CSU Bakersfield, Long Beach State and Ball State. The Lions most recent game, however, against Texas Tech was a tough battle that ended in a double overtime tie.

So far, the Lions have scored a total of 20 goals in addition to recording 13 assists. Sophomore forward Sarina Bolden leads the team with three goals this season and has established a strong presence on offense. She has taken 14 shots in total this season with five on goal.

Junior forward Sarah Sanger also plays a significant role for the Lions in the team’s offense as she leads with a .579 shots on goal percentage, shooting a total of 19 attempts. She has contributed two goals this season.

Currently the Gauchos have not yet cracked the national top 25 rankings, though they received four votes in last week’s National Soccer Coaches Association of America (NSCAA) poll. Also as of Monday, UCSB is No. 42 in the NCAA RPI rankings.

The Gauchos will look to embark on a new winning streak during their road trip to face Pacific on Thursday, Sept. 22 at 5 p.m. and LMU on Sunday, Sept. 25 at 1 p.m.

A version of this article appeared on page 7 of September 22, 2016’s print edition of the Daily Nexus.