As the intriguing phenomenon of de-extinction becomes less like science fiction, UCSB ecologists Douglas McCauley and Benjamin Halpern have recently published a list of basic criteria in the journal Functional Ecology for fellow researchers to adhere to in order to ensure de-extinction is as beneficial and sustainable for ecological systems as possible.

“The whole thing is that now science may have the power to bring species back from the dead,” said McCauley, an associate professor in the Department of Ecology, Evolution, and Marine Biology.

“With these new technologies, [such as] genetic engineering and cloning, they are beginning to open the possibility [to] maybe use these tools to bring species back to life.”

The purpose of de-extinction is not to create a living natural history museum like those popularly depicted in the “Jurassic Park” series, but to improve ecosystems by restoring key species and their jobs to habitats.

“We become hyper-aware in the world of ecology that it’s not just a one species game; everyone works together as a team to get the job done. When we think about de-extinction, we think about how well these species will slot back into the system of life,” McCauley said.

McCauley and co-author Benjamin Halpern, the director of UCSB’s National Center for Ecological Analysis and Synthesis and a professor at the Bren School of Environmental Science and Management, have listed three basic guidelines to aid de-extinction researchers.

“[First], we suggest that if something just went extinct, or more importantly is on the edge of extinction, maybe consider using those tools on them. Instead of trying to plug [DNA] holes on [the woolly mammoth], you can just go to the last rhino and sequence its genome in entirety,” McCauley said.

This is one of the problems of bringing back the woolly mammoth: some of its DNA sequence may be missing since DNA degrades over time. 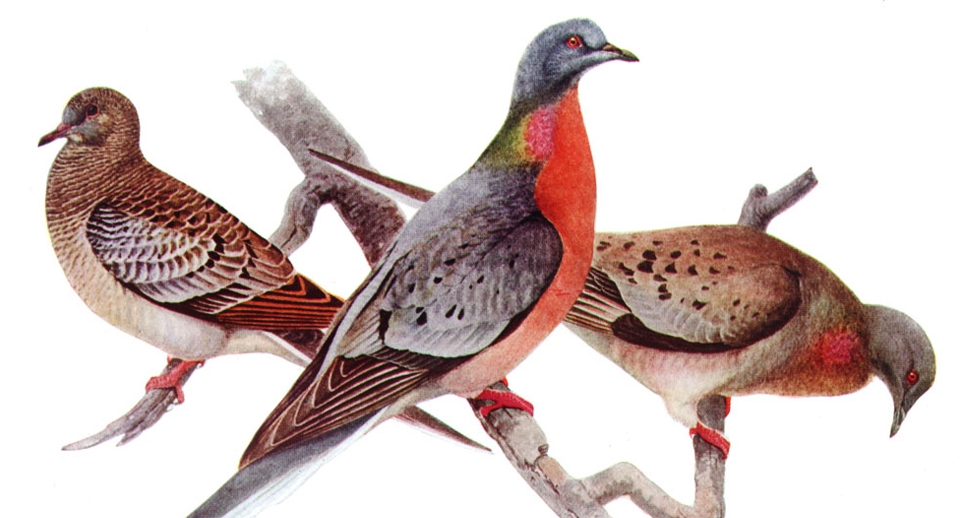 While woolly mammoths are unlikely to be brought back due to their large size and missing DNA, a more practical option is the extinct passenger pigeon. Courtesy of abcbirds.org

UC Santa Cruz’s Beth Shapiro, an associate professor in the Physical and Biological Sciences Department, and her lab is leading some of this effort.

“What she and her colleagues do is look at the woolly mammoth and then look at the closest living relative, like the elephant. They say, ‘Well, the DNA here looks kind of like this, so we will [plug in] this other sequence,’ but it is guesswork,” McCauley said.

According to McCauley, there are now three of four different pathways through which to bring a species back from the dead. One pathway is to sequence the genome, fill in any gaps, then take an egg cell from a surrogate mother, take out its genetic material, put in the new genome and use in vitro fertilization (IVF) to plant the new egg cell in a host mother.

McCauley believes it is important to talk about this now so that researchers in the labs involved think more carefully about how ecology operates in order to yield better results.

The second and third guidelines the UCSB ecologists recommend are to bring back species with irreplaceable jobs and those that can be restored to meaningful population levels in order to do those jobs effectively.

“There’s many reasons, for instance, why it would be very difficult to bring back 10,000 mammoths to North America. Mammoths are not cute and cuddly creatures. They’re not the sort of thing you’d want running in Goleta; you’d have a lot of people calling the police,” McCauley said.

Instead, McCauley’s lab suggests bringing back species like the Réunion giant tortoise and the Christmas Island pipistrelle bat, both of which had key jobs that have yet to be replaced by remaining species.

Although it is doubtful the well-known dodo bird will return — mainly due to problems finding a whole specimen with a complete DNA genome — a popular and realistic candidate is the passenger pigeon.

“They used to be one of the most common birds on the planet, numbering in the billions, so when you had a flock of passengers flying overhead in the Midwest people would say that the sky turned black from so many of these pigeons. I think people are trying to bring back this important part of American biological heritage,” McCauley said.

However, the passenger pigeon is noted as “a little bit old” despite going extinct in 1914. There is no set age for what qualifies a species as being too old to resurrect because some ecosystems have changed more than others and it depends on what part of the world the ecosystem is in.

“Two reasons for choosing recently extinct species or those on the brink of extinction are: you get genetic information back with higher fidelity and the systems have changed less. When there’s less likelihood for these ecosystems to evolve, there’s a higher likelihood that you could put these species back. Animals evolve and so do ecosystems.”

Unfortunately for the passenger pigeon, McCauley said, “The eastern forests they called home have been ravished by a huge disease which killed the chestnut trees, so it’s going to be a whole lot harder for them to go back.”

In short, McCauley hopes de-extinction will be successful in helping our planet thrive and become resilient to the side effects of climate change, including global warming, acidification of the oceans and what appears to be the sixth mass extinction.

“[It] is very exciting to be able to start punching holes in the fabric of life, but we also need be cautious that it does actually be useful and not become a distraction for conservation.  [De-extinction] could be as soon as a decade, which means this isn’t science fiction anymore. This is science.”

Beth Shapiro’s appointment is in the Ecology and Evolutionary Biology Department at UCSC. (Physical and Biological Sciences is a Division, like UCSB’s College of Letters and Science.) You should read her book, rather than relying on McCauley’s summary of it—I think you’ll find that they are more in agreement than your article implies.

“They used to be one of the most common birds on the planet, numbering in the billions, so when you had a flock of passengers flying overhead in the Midwest people would say that the sky turned black from so many of these pigeons”

And they want to bring it back because….?