The stars and planets above us may now be easier to spot with the development of a new app, Cosmic Watch, that turns your smartphone into an interactive 3D astronomical time device.

Serving as a modern astronomical instrument, Cosmic Watch aims to help the user measure and experience time as it displays the celestial objects surrounding Earth.

Before the Western calendar was introduced in 1582, different cultures had various ways of measuring time and celestial bodies. The Mayans are well known for their codices that tracked the moon phases and eclipses. Likewise, the Egyptians built obelisks that were used as shadow clocks which allowed the citizens to divide their day into two parts depending on the obelisk’s shadow.

According to Eduardo Santana, one of the creators of Cosmic Watch, the idea came after thinking about the Western calendar and how we, as humans, represent time.

“I was amazed to realize the astronomical nature of time measurement and the importance it had to the development of ancient cultures. Since that moment, I was sure there has to be a better way of displaying time,” Santana said.

To Santana, the better way of displaying time is via smartphones. 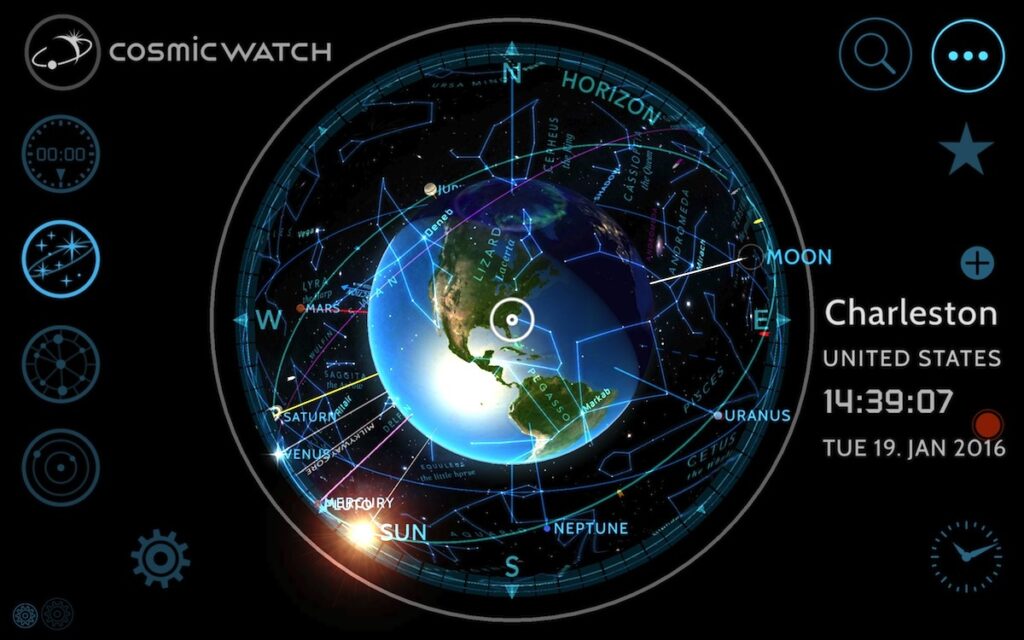 Initially showing Earth, Cosmic Watch allows the user to view constellations as well as zodiac positions. Depending on the user’s location, Cosmic Watch will display the local time, but users also have the freedom to view times in other countries. Courtesy of Jeevan Ram

The Earth is the central focal point of the Cosmic Watch. It tracks the time worldwide so with a tap of the user’s finger, the local time anywhere can be known. Additionally, the Cosmic Watch has other features that displays constellations, planet names and the planets with their zodiac symbol.

One of the more interesting features of this app is that it allows the user to “time travel.” The clock can be reversed or fast forwarded to show the user the planets’ positions, solar eclipses and the times of sunrise and sunset. While fast forwarding time, the planets will leave a trace of their apparent movement as observed from Earth.

According to Jeevan Ram, a developer at Cosmic Watch, the app calculates the celestial bodies’ position with the astronomical algorithms of Jean Meeus, a Belgian astronomer specializing in celestial mechanics. Meeus’s algorithms are highly precise. It can calculate sunrise and sunset times to the nearest minute and phases of the moon within four to 17 seconds.

As of the now, Cosmic Watch only displays the Earth as well our solar system. However, both Ram and Santana are interested in developing the app to show planets and bodies outside our solar system.

“We have played with this thought already as one of the most important functions of Cosmic Watch is to remember our comic existence. We are on a giant ball floating in space surrounded by millions of stars and galaxies. It would be nice to be able to zoom out and see our position in the Milky Way,” Santana said.

As Ram, Santana and other contributors were developing the app, they realized Cosmic Watch had potential as an educational tool to learn about the basic concepts of astronomy and celestial navigation. Their core motivation was to create an incredible experience in which learning happens in a intuitive way.

While the app is currently available to iPhone users, future plans for cosmic watch include developing it for Android users and expanding it into other time-telling devices. Cosmic Watch Eclipse, an interactive wall clock, and Cosmic Watch Vision, an interactive table clock, are such devices. Ram says these devices could amplify the users’ learning experiences so teachers could use it in classrooms and planetariums.

“We also dream of the Cosmic Watch as a standalone product in entrance halls, airports, at your desk or apartment, in boats or why not even in a car dashboard? For this dream to come true, we are still looking for partners who would like to travel with us this science fiction odyssey.”