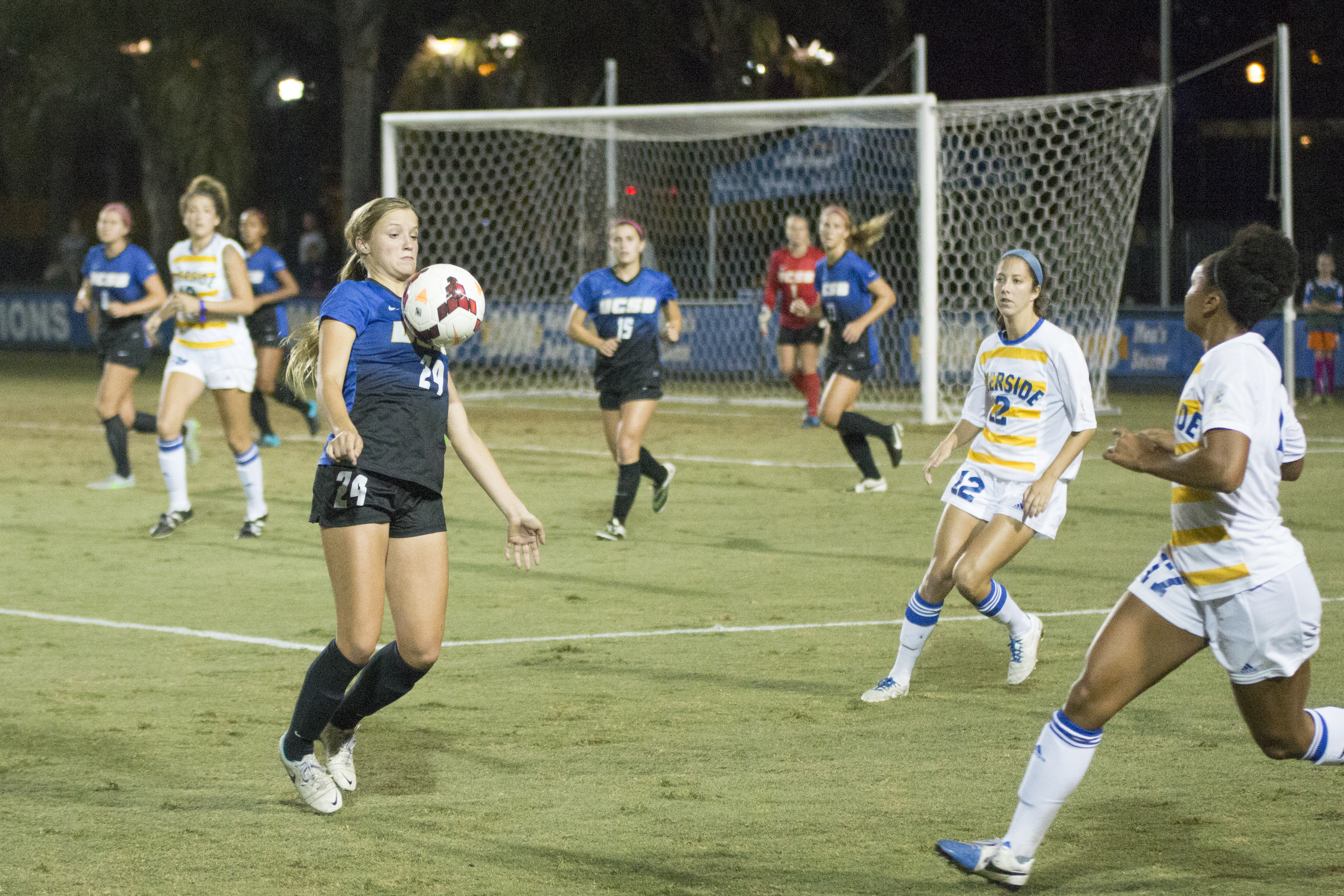 Game six is on tap for the undefeated UCSB women’s soccer team on Friday and they don’t intend to come away with a loss. The Gauchos will enter Friday’s game against the St. Francis Red Flash with a faultless 5-0 record and high expectations of extending their winning streak.

St. Francis comes into the game with a shaky 1-5 record. The season thus far has not been promising for the Red Flash as they collected their first win of the season in their most recent game against the University of Maryland when they won by just one goal. St. Francis will look to carry the momentum of its latest win into its upcoming game against the Gauchos.

The two teams have experienced starkly different starts to their 2016 season. While the Red Flash have been fighting for a win, the Gauchos have been fighting to maintain their winning streak and avoid putting up a loss this season.

The Gauchos have scored 11 goals so far in the season off 53 shots, with 27 being on goal. UCSB is playing at .509 shots on goal percentage, which makes them a deadly threat to any opponent when in possession of the ball. The Gauchos have also tallied 23 corner kicks, converting two into key goals.

Going into the match, the Gauchos clearly have the stronger offensive team.  St. Francis has scored just two goals this season. They have taken 65 shots, with 29 being on goal, putting their shots on goal percentage at .446. In addition, the Red Flash have earned 15 corner kicks in their six games but have given up a dramatic 49. The Red Flash defense will need to keep their formation tight, as the Gauchos will definitely be firing shots all day if they manage to get through the defensive wall.

Standout St. Francis sophomore defender Shannon McGinnis carries her team with the highest shooting percentage of .250.  She has contributed one of the two goals her team has scored this season. As a freshman, McGinnis earned NEC All-Rookie Team honors, NEC Rookie of the Week and made 15 starts while appearing in all 19 games. She was also second on her team with four goals.

Another player to look for on St. Francis is sophomore midfielder Sara Suler, who contributed the second goal for her team. Suler shoots with a .125 percentage and provides a strong presence and reliable outlet in the middle. During her freshman campaign, she scored two goals, both against the Gauchos in a 3-2 defeat for the Red Flash. The Gauchos will keep a consistent eye on Suler as she is fully capable of getting a shot off in UCSB territory.

Unfortunately for St. Francis, the Gauchos offense, and the defense has been looking better than ever. Sophomore goalkeeper Brittney Rogers has recorded 17 saves so far this season and has led her team to four consecutive shutouts. Rogers has made incredible saves not just from long balls towards the goal, but also in one on one situations. If the Red Flash are lucky enough to get through the Gaucho defense, they will have to put up a fight against Rogers.

Sophomore midfielder Maddie Gibson turned up the heat in the last game when the Gauchos beat Utah State 1-0 thanks to a clutch Gibson goal. While Gibson has contributed just one goal so far this season, she has contributed in other ways, such as delivering crisp and accurate passes to her teammates up front. Gibson has delivered two assists this season.

Sophomore forward Mallory Hromatko is a frequent recipient of Gibson’s passes and is yet another key player on the team. Hromatko has scored two goals this season and is shooting at a .250 percentage. Hromatko will be a tough shooter to stop for the Red Flash.

The Gauchos will face the Red Flash at home on Friday, September 9 at 7 p.m. at Harder Stadium. The game will be broadcasted on ucsbgauchos.com