An exciting collaboration between Fred Wudl of the Chemistry Department and Ram Seshadri of the Materials Research Laboratory at UCSB has unexpectedly solved the 200 year-old chemistry enigma of why iodine turns blue/black in the presence of starch during their research of photovoltaic materials.

In this classic experiment, often performed in high school chemistry classes, a small piece of starch, such as a potato slice, is placed in a test tube with a few drops of iodine solution to immediately create a very strong, bright blue/black color.

A similar version of this experiment is conducted in biology classrooms to demonstrate the presence of amylase, the enzyme which breaks down carbohydrates, in saliva.

“You take a test tube with some starch, put in a little bit of iodine so it changes color, and then you spit into it. [Once] the amylase breaks down the starch, the iodine polymer chains are broken down, and the [blue/black] color disappears,” Seshadri said. 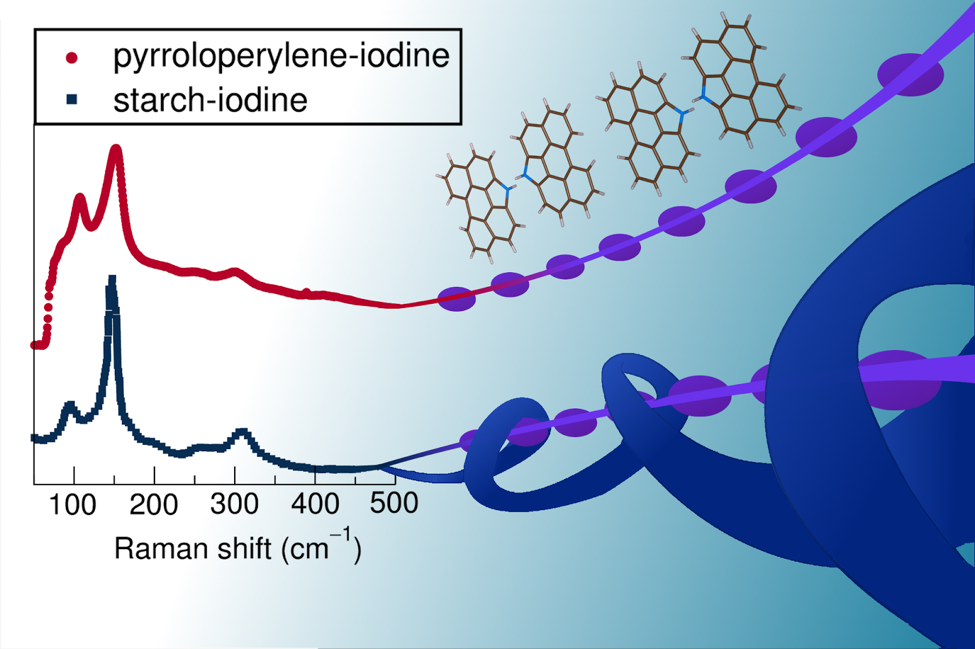 As seen in the illustrated drawing by Hayden Evans, Seshadri’s graduate student in the Chemistry Department, the Raman spectroscopy displays corresponding peaks indicating the two complexes, pyrroloperylene-iodine and amylose-iodine, having the same linear polymer chains of iodine, because of the way it interacts with light. Courtesy Hayden Evans, Advisor: Ram Seshadri

Iodine is an element that occurs in a dimer pair, two structurally similar monomers joined by bonds that can be either strong or weak, covalent or intermolecular. Iodide is the ion of the element that carries a negative one charge, and is usually bonded to a group one element, such as potassium, to form a stable molecule. Polyiodide is a bent or crooked-shaped anion molecule of three or more ions bonded together. Amylose is one of two polysaccharide carbohydrates composing starch.

This color changing starch/iodine complex was discovered over 200 years ago by French chemists J.J. Colin and Henri-François Gaultier de Claubry. The complex was believed to consist of a clathrate, or lattice, of polyiodide and carbohydrate molecules. Today, this complex, or molecular bond, is more commonly referred to as amylose-iodine.

What Wudl and Seshadri found is that the blue/black color is produced from the linear structure of iodine polymer chains, created in the presence of either amylose or pyrroloperylene, an organic semiconductor, interacting with photons of light.

“Even we do not have direct proof; we only have indirect proof. The particular complex of the amylose and iodine chains is not sufficiently well defined [enough to] use the x-ray refraction to establish the structure,” Seshadri said. “What we made is a structure of pyrroloperylene and iodine, which is well defined, and we can find where all of the atoms are using x-ray refraction.”

Wudl and Seshadri then measured the wavelength and intensity of inelastically scattered light from the molecules in a process called Raman spectroscopy to further analyze their structure. They discovered that the pyrroloperylene-iodine complex strongly resembled the amylose-iodine complex.

In traditional experiments, amylose forms a corkscrew shape which the linear iodine chain rests inside because of its bond angles. In Wudl and Seshadri’s experiment, the pyrroloperylene exhibits a nearly planar structure, which creates and supports the infinite linear iodine chains, similar to a ladder or a pole, from a precipitation reaction.

Wudl and Seshadri’s original research was to study the pyrroloperylene-iodine complex for  photovoltaic, or solar power-generating, materials.

“[We got to this experiment] because my colleague, Wudl, knows a lot. He knew that this was a very classic problem that no one knew the solution to. So when we came upon the structure of pyrroloperylene-iodine, he said, ‘Let’s also think about amylose-iodine,’” Seshadri said.

On top of the discovery of this historic reaction, Seshadri notes they have actually presented the first description of the polymer chains of any single atom. Polymers are often made of multiple elements; for example, cellulose consists of carbon, hydrogen and oxygen.

Iodine and sulfur are located in separate columns on the periodic table, meaning they have different numbers of valence electrons. Valence electrons are the electrons that participate in bonding and move about in specific 3-D shapes around the nucleus, called VSEPR electron clouds, which influence the bond angle between bonded atoms. The bond angles then shape the structure of the molecules these atoms are in.

Although this unexpected finding of the amylose-iodine complex may not have any effects on applied usage, Seshadri hopes it will make its way into the textbooks.

“As chemists, we are always interested in understanding the structure and bonding and how atoms come together. And it is this fundamental understanding that allows us to make use of these materials, whether it is fabrics to wear or plastics or the lithium battery that powers your cellphone,” Seshadri said. “So every time you make a new contribution to structure and bonding, we don’t ever worry if it is going to be useful, because the knowledge is always going to be useful.”