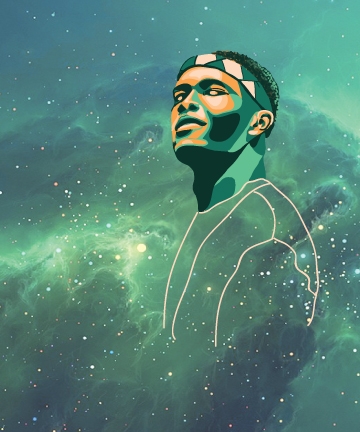 Using the phrase “long-awaited” would be trite in welcoming the release of Frank Ocean’s third album. The reclusive writer, singer and producer has been clamored after since last summer when fans were promised new material in the form of a project called Boys Don’t Cry. Over a year later, it has since been rechristened Blonde, 60-minute opus streaming exclusively on Apple Music.

To accompany the album, Ocean also distributed a zine in pop-up shops located across the country, including his native Los Angeles. He gave the title Boys Don’t Cry back to the extensive, glossy magazine, which itself resembles a concept more modern-art than DIY. Not only did he give us Blonde and Boys, but we also have Endless, a sparse black-and-white visual album full of covers and older material, also exclusive to Apple Music.

It’s been four years since Frank Ocean put out the ethereal, superb channel ORANGE. Four years have passed since the media buzz, the praise for his openness about his sexuality and the Grammy nods. It’s left many wondering: Was he working on this the whole time since then, or did he take time off, then finish this all at once just to please everyone?

Either way, both Blonde and Endless are beautiful, there’s no denying it. So the question is, where does Frank Ocean fit into music now? Apple Music dubs his music as pop, but it all has an obvious inclination toward soul. He may even near avant-garde territory with the release of the zine and the visual album.

Unsurprisingly, the music accompanying the visuals has the same sophisticated feel. “Nikes,” the cerebral, genre-bending opening track to Blonde, is gorgeously intricate, and it also serves as the album’s lead single. It is a reminder that Ocean is not only a brilliant songwriter, but also a master at bending the intricacies of song structure to his will. The song, like the rest of the album, is free-floating, almost formless, but somehow still has a definitive shape.

However, there is a distance that Ocean puts between himself and the listener, felt most in his use of cold beats and vocal manipulation. On songs like “Pink + White” and “Seigfried,” we still can catch a glimpse of the sensitivity that his earlier work was built around. “Godspeed” has the same gospel elements favored by enigmatic artists Chance the Rapper and Kendrick Lamar. “Ivy” — the only track on the album that has a traditional chorus — is about a first love.

For the most part, though, that’s where the warmth seems to stop. “Less morose and more present,” he raps on “Seigfried,” almost invoking a mantra for the collection of songs.

Blonde, Endless and Boys Don’t Cry almost seem as though they were commissioned, brought about by incessant requests for new material from a hungry fanbase.

Now that the reality of new material from Ocean is actually real, what’s left is something that doesn’t evoke the same emotion as a record as raw as channel ORANGE. Unlike channel ORANGE, however, this distance has allowed him to create something outside of himself. The visual album is a concept that wouldn’t have even been possible four years ago, before the rise of streaming services.

Artists were not pushing the boundaries of the relationship between music and moving pictures in the same way. Beyoncé would not have released her eponymous fifth album or Lemonade; Kanye West would not have released his headline-inspiring worldwide screenings of his “Famous” short film project. The rumors swirling around the release of the album itself were virtually all generated by the internet. Music does not exist now in a vacuum from technology or visuals.

Bob Dylan’s Blonde on Blonde cover is an out-of-focus portrait of Dylan himself and was one of the first double albums in history. Frank Ocean’s Blonde cover features a portrait of the singer covering his face with his head down. Both were instant classics upon their releases and feature some of the most anticipated music of their times.

Frank Ocean, like Dylan or other great artists of any era, is not just creating music that does not sound or look like anyone else’s. He moves beyond that, creating a world of his own that exists for us, too.