Various immersive simulations came together during the convention, one of many sure to crowd the convention scene in the near future to heighten tactile and auditory experiences 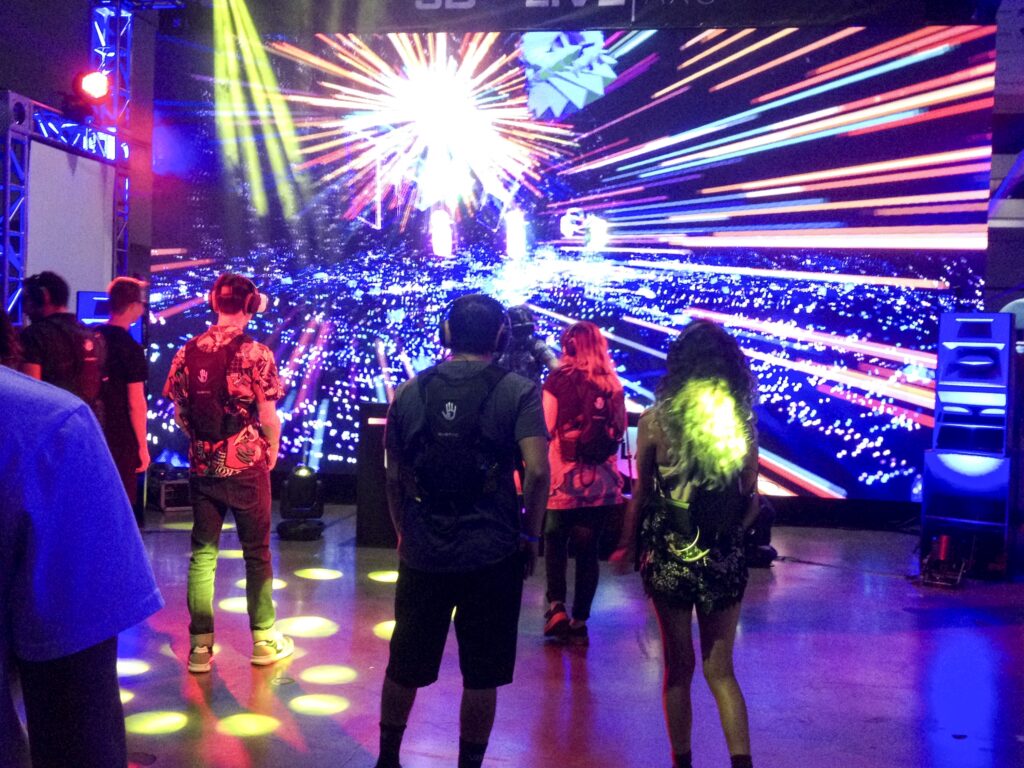 VRLA attendees immerse themselves in a world of color and sound at the world’s first VR rave. The performance used SubPac technology, among other new VR systems, to feel music and beats physically. Phi Do / Daily Nexus

“Most of you are here because you believe VR is the future,” declared co-founder Cosmo Scharf to a crowd of 6,000 techies early this August at the Virtual Reality Los Angeles (VRLA) Summer Expo 2016, the world’s largest virtual reality industry convention.

Such a proclamation sounds like science fiction, but the idea of virtual reality (VR) is actually ages old and currently the coolest thing there is.

In fact, it can be traced back to the debate of over 2,000 years ago between philosophers Aristotle — whose view of reality follows “what you see is what you get” — and his teacher Plato, who posits that our reality is a mere imperfect reflection of the ideal world beyond the physical realm.

What if, however, both reality and the “ideal world,” with added imagination, were morphed into VR in real time? Effectively, this would render the Aristotle/Plato debate irrelevant, and that’s what VR promoters like Scharf and the growing legion of VR techies and enthusiasts around the world believe: In the future, VR will regularly deliver such experiences and even become part of life.

While only time can tell if they were right, the new, immersive experience is undeniably exciting with its promising and impactful social premise.

VR has long existed as simply a concept, and it wasn’t until 1968 that we saw the first primitive VR device (with the ominous name, “The Sword of Damocles”), created by computer scientist Ivan Sutherland. In the ensuing years, other early VR inventions were developed, and the vision began to seep deeper into our culture through science fiction novels (e.g. Philip K. Dick’s We Can Remember It For You Wholesale and William Gibson’s Neuromancer), Hollywood films (“TRON” and “The Matrix”) and TV shows (“The Twilight Zone” and “Star Trek”).

These media instilled in the public a fascination with VR, but there was still a big gap between the idea and the actual experience.

Fast forward to the 21st century. Both newly inaugurated conventions such as Silicon Valley Comic Con (SVCC) and established expos like VRLA are on a mission to showcase how divides are being erased, both between virtual and physical spaces and between the hands of developers and those of everyday audiences.

At VRLA, consumers and industry professionals alike marveled at 360-degree domes, cut a rug at the first-ever VR rave and experienced various other immersive simulations from 133 exhibitors like HTC Vive, Sixense and Vanishing Point Media.

VRLA explored how cardboard boxes could transport people into worlds new and old through Unofficial Cardboard. It addressed how to add a tactile touch to the virtual experience by using SubPac to physically feel music and sounds pulsating through the body. The con also revealed how one person can seamlessly be their own production studio and create and share VR experiences through Mindshow.

There were experiences with dinosaurs to run from, castles to defend and painful memories to suppress.

Beyond these entertainment experiences, VR has also been used for simulations to help design factories, train soldiers and astronauts, help athletes improve their techniques and even guide surgeons through complicated procedures.

Mark Zuckerberg of Facebook, who spent $2 billion to acquire Oculus Rift (which just launched its first generation of headsets to the public in March), wants to enhance social media, gaming, online education and sporting events with VR technologies to produce a richer immersive experience for Facebook’s billions of users. And that’s just a small part of Zuckerberg’s vision for VR potentials, according to his statement.

Recognizing its future potential, Apple co-founder Steve Wozniak and Stan Lee, comic creator and former Marvel Comics chairman, teamed up to debut the first-ever SVCC in March this year. The convention brought together more than 60,000 comic fans, VR technologists and game developers to promote the convergence of entertainment and technology.

“Virtual reality: It’s like an artificial world that feels and seems real,” Wozniak said in an interview with TechCrunch. “And that’s what comic books and movies are all about.”

Between SVCC’s blending of entertainment and technology and VRLA’s vision of VR applications in multiple facets of society, these potentials don’t seem to be far off from Ernest Cline’s projections in his best-selling novel, Ready Player One. According to Cline’s novel, 2044 will enjoy a takeover by Oasis, a virtual universe housing thousands of different virtual worlds, through which colossal numbers of people can compete against one another in massively multiplayer online role-playing games (MMORPGs) or participate in all kinds of activities like shopping, socializing and even dinning at favorite restaurants just like in the real world.

Cline’s fiction might not be too farfetched; MMORPGs have long been a reality with games, like World of Warcraft (released in 2004), which have millions of players worldwide online 24/7. Hence, a virtual universe like Oasis could conceivably begin to take shape once the VR ecosystem becomes more mature.

In “The Matrix,” arguably the ultimate virtual reality film, Judas figure Cypher admits his sin of delivering rebellion leader Morpheus to the all-powerful Machines’ avatar, Agent Smith, stating, “You know, I know this steak doesn’t exist. I know that when I put it in my mouth, the Matrix is telling my brain that it is juicy and delicious. After nine years, you know what I realize?”

He takes a bite of the steak before declaring his guilt.

If Zuckerberg, Wozniak and Scharf are right, we might see VR experiences become as common as online video chatting and VR devices as ubiquitous as video game consoles or computer tablets in households. For now, VR is definitely a guilty pleasure more and more people are ready to embrace.