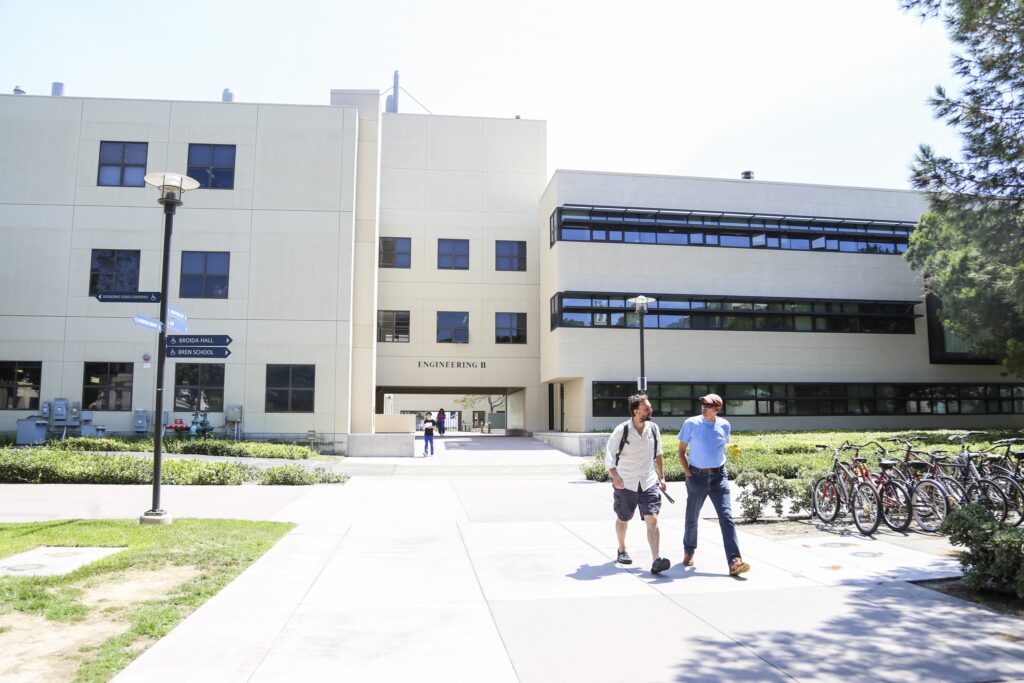 Above is Engineering II, a three-story building where many upperclassmen majoring in mechanical and chemical engineering have classes as well as labs. The labs are also occupied by professors conducting their own research. Jenny Luo / Daily Nexus

An interdisciplinary culture of innovation committed to developing new technology in ways that benefit the world, the UCSB College of Engineering has proven itself as one of the most successful public research institutions in the country for the past 50 years. As such, the College of Engineering is celebrating its 50th anniversary after years of growth and emerging engineering departments.

The curriculum in the college is designed to be completed in four years. It aims to provide students with the background necessary to begin professional careers or to enter graduate programs.

Just three years after its official establishment, the college became involved in work that would eventually lead to the founding of the internet.

Under the direction of Glen Culler, a professor of electrical engineering, the college was chosen as one of the first four nodes, or connection points, of the original Advanced Research Projects Agency Network (ARPANET), along with UCLA, Stanford and the University of Utah.

Culler also served as the director of the UCSB Computer Center in the 1960s. Then in 1999, he was awarded the National Medal of Technology and Innovation for his pioneering innovations in computing, including digital speech processing, the invention of the first online system for interactive graphical mathematics computing and ARPANET.

A pioneering nature seems to be what has the kept the college successful for 50 years. Since its inception, its faculty has been involved in groundbreaking research that, in some cases, has led to a Nobel Prize.

Currently, the College of Engineering has three Nobel Prize winners in its faculty. In 2000, Alan J. Heeger, professor of physics and materials, won the Nobel Prize in Chemistry for the discovery and development of conductive polymers.

In that same year, Herbert Kroemer, professor of electrical and computer engineering, won the Nobel Prize in Physics for developing semiconductor heterostructures used in high-speed and opto-electronics. More recently, in 2014, Shuji Nakamura won the same Nobel Prize for his contribution to the invention of blue light emitting diodes.

In addition to three Nobel Laureates, other faculty members are part of the National Academies of Science, Engineering, and Medicine, the Royal Swedish Academy of Science, the Royal London Society and have won awards such as the National Medal of Technology and Innovation.

Alumni from the college have become innovators in their own right, such as Naga Sowjanya (Sowju) Mudunuri, who earned her M.S. in electrical and computer engineering in 2009, and Bob Lansdorp, who completed his Ph.D. program in materials in 2015.

Lansdorp is the cofounder of Milo Sensors, a startup whose first product is a wearable, non-invasive, blood alcohol level biosensor. It connects to the user’s smartphone and stores all the bio-data in an app. Milo Sensors’ origins began at the 2015 New Venture Competition where Lansdorp, a Ph.D. candidate at the time, and his business partner, Evan Strenk, competed. Their team won that competition and have since been awarded $100,000 in funding.

Mudunuri develops code for different microservices that serve the necessary backend functionality for the yoga and personal trainer app, FitStar, from the Fitbit family.

According to Mudunuri, her time at UCSB has laid a strong foundation and prepared her for facing real world challenges, such as picking up new programming languages and staying on top on the latest technological trends.

With new students admitted into the College of Engineering for fall 2016, it is no doubt that the college will continue to have faculty and students who possess a pioneering nature that will lead to technological advances in the future.