The Daily Nexus
Sports
UCSB Ready to Ascend to New Heights, Kicks Off Season at Fresno State
August 19, 2016 at 2:27 am by Jorge Mercado

The UCSB women’s soccer team will look to build upon the success it garnered last season, including its co-Big West regular season title, this Friday when it opens the season against Fresno State on the road.

The Gauchos are coming off a solid season in which they finished 13-6-1 overall and 6-2 in the conference with a solid roster filled with a healthy combination of great new up-and-comers and solid veterans. The 13 wins are the most the program has won in a single season since 2004. 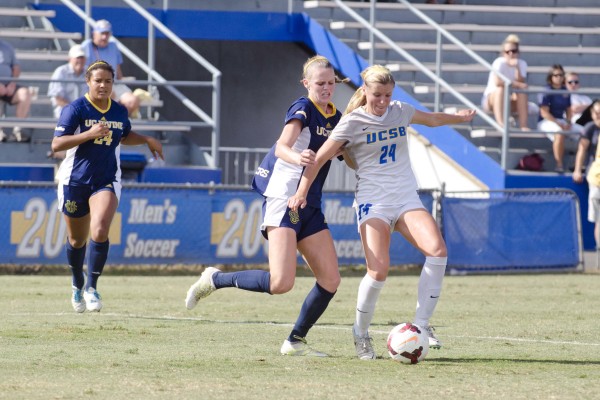 Paul Stumpf, the reigning Big West coach of the year, enters his 18th season as the Head Coach for the women’s soccer team. During his tenure at UCSB, Stumpf has amassed an overall record of 158-142-37 while leading the program to two NCAA Tournament appearances.

The Gauchos are also returning key pieces on the field, including last year’s Big West Freshman of the Year, sophomore forward Mallory Hromatko, and junior forward Amanda Ball. Both Hromatko and Ball were named to the Preseason All-Big West team after solid performances last year.

Hromatko, a California native, started all 20 games and led the team in goals (nine), assists (six) and points (24), earning her a First Team All-Big West selection, while Ball earned a Second Team nod after netting five goals, tied for second most on her team, and having two assists. Another notable returner is sophomore Sydney Magnin, who started in 19 games for the team last season, scoring four goals and totaling eight points to earn a spot on the All-Freshman Team.

At goalkeeper, Santa Barbara will look to rely on senior Jacq Caginia, who started in seven games last year and tallied 17 saves, four shutouts, and a 5-2 record while only surrendering five goals.

While the Gauchos hope to reinvigorate that fire from last year, Fresno State will look for a fresh start in 2016 after going 5-12-1 last season, including a 1-6 record in nonconference play.

It’s tough to start the season against a team that won a shared regular season title last season, but the Bulldogs look forward to the challenge as they return nine starters to their roster and 12 letter winners, including All-Mountain West second teamers Myra Delgadillo and Maria Gomez. The pair of juniors accounted for half the team’s 16 total goals scored all season.

Fresno State currently holds the lead in the all-time record between the two squads at 5-3-1, but the last time these two teams met in 2013, the Gauchos won in shutout fashion, 2-0.

Opening day should be a fun one for fans of both sides. The Gauchos, in particular, have big expectations this season and seeing how they respond to those expectations will be entertaining, as will watching Hromatko, one of the best young players the Santa Barbara women’s team has seen in a while.