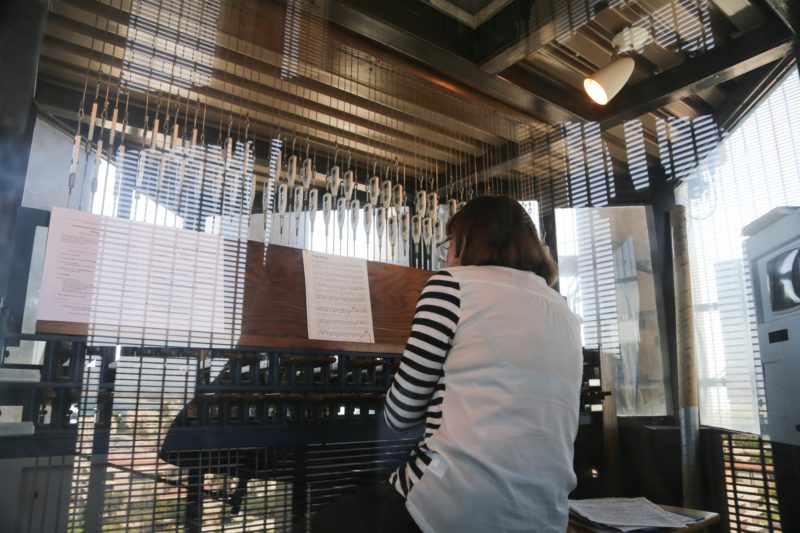 Recognized as merely the source of the hourly rings that echo throughout the campus, Storke Tower houses an underrepresented beauty: the carillon. The bells of the carillon dangle from the tower’s ceiling, ranging from 18 pounds to a whopping 2.5 tons. Pressing pedals for the heavier bells and keys for the lighter ones draws the clappers lodged in the bells to the opposing side to generate the jingles serving as the bystanders’ background music. 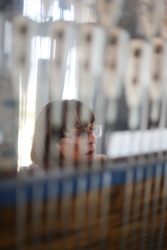 While Margo Halsted’s banging fists resembled those of a hungry child, her arrangement confirmed her status as a seasoned musician with a 52-year-long career as a carillonist. She ignited the recital with Arthur Bigelow’s “Big Bells, Little Bells.” The Stanford University alumna then sparked audience interaction from 175 feet above by leaving them to guess the three folk songs she played afterward. Audience members situated in their lawn chairs and blankets whispered to each other in their quest to solve Halsted’s riddle, the answer to was which was later revealed as the Irish “Danny Boy,” English “Greensleeves” and French “Alouette.”

While a family zoomed through the bike lanes, their pedaling slowed and their heads were drawn towards the sky in search of what resembled an entire orchestra but was merely Halsted and the elaborate percussion instrument stationed at the top of the tower. She embarked on Johann Sebastian Bach’s “Jesu, Joy of Man’s Desiring” with quick, high-pitched chimes and an occasional sequence of slow, deeper rings. The adjunct UCSB Professor of Music and carillonist continued with what was seemingly a soundtrack to the perfect Sunday with the romantic melody of Stephen Foster’s “Beautiful Dreamer.” Halsted upheld the deep bellows of Foster’s piece, emphasizing the romantic and slightly melancholic air of the work before shifting to Foster’s “Jeanie with the Light Brown Hair.”

Halsted continued her careful key banging with James B. Angell’s 1975 “Fugue for Bells” and Mariam Soni’s “The Last Waltz” before returning to some audience interaction. She produced “The Sound of Music” and “It’s a Small World” without the crowd’s prior knowledge before completing the recital with Matthias van den Gheyn’s “Prelude No. 5.” 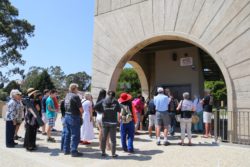 Those stretched across the lawn rushed to the elevator at Storke Tower upon Halsted’s completion. They were granted a ride to the top of the building — the tallest in Santa Barbara County — where they were not only privy to exceptional UCSB views, but the chance to witness the execution of the carillon. Halsted squeezed groups behind the 16th century creation and replayed a song of their choosing as their eyes grew in amazement.

As a pianist, she admitted the intricate instrument was no tough feat for her. In fact, she demanded of all aspiring carillonists, “You’ve got to play the piano well and express yourself through the piano.”

Santa Barbara resident and musician Leona Marie exclaimed, “[Halsted] is a created named from the ‘60s,” and she was excited when her friend, group member and SBCC music director Erin Bonski informed her of Halsted’s recital. Marie and others were allowed to play any key or stomp on any pedal before descending back to the base of Storke Tower. Attendees babbled in their elevator ride down, curious about which keys they’d tapped before leaving to tend to the rest of their Sunday festivities.