Coral reefs, known as the “rainforests of the ocean,” are the most diverse marine ecosystems on Earth. Teeming with life, coral reefs provide food and shelter for almost one-third of the ocean’s marine life. There is a delicate balance between corals and the herbivorous fish that graze among them that maintains the unique biodiversity of this ecosystem. 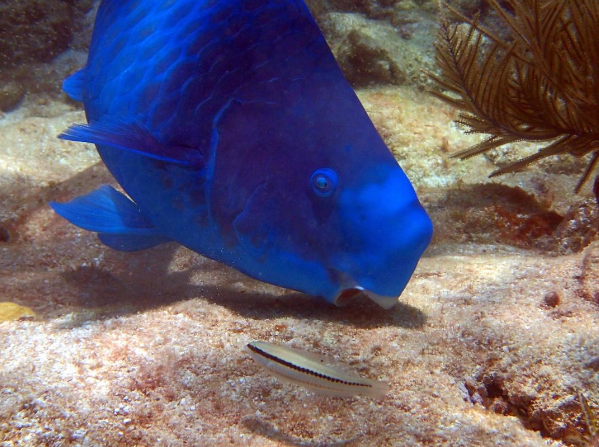 The diversity of herbivores is critical to the proper function of marine ecosystems. The parrotfish, seen above, removes the seaweed from coral reefs; however, it also exposes the reefs to diseases that kill off the coral. Courtesy of Burkepile Community Ecology Laboratory

Marine biology professor Deron Burkepile studies how alterations in trophic interactions and ecosystem productivity affect community structure and ecosystem function. Burkepile found that a normally symbiotic relationship between herbivorous parrotfish and coral reefs can potentially turn deadly for the coral due to its weakened state.

“We’ve known for a long time that parrotfish are important for reefs because they remove seaweeds that would otherwise compete with corals, and we also know that parrotfish bite corals on a daily basis and [the healthy corals] do just fine,” Burkepile said.

Parrotfish nibble harmlessly at the algae growing on coral, but due to the corals’ weakened state, the nibbling leaves wounds that are susceptible to infection by pathogens.

The discovery of the beneficial relationship that turned sour was a surprise outcome in Burkepile’s research. It was observed through the photographs taken that corals that had parrotfish bite marks on them looked increasingly diseased and unhealthy as the weeks went on.

Burkepile found that those corals simply died. In order to determine whether the cause of the coral death was the parrotfish or the weakened state of the coral due to nutrient pollution, Burkepile decided to mimic these circumstances in a controlled setting.

It was expected that adding excess nutrients and simulating nutrient pollution would reorganize the microbes on the corals, allowing for the outbreaks of potential pathogens. However, Burkepile found that leaving seaweed to grow and compete with corals allowed disease to break out, rather than the suspected cause of nutrient pollution.

“This is when we started seeing the big changes in the microbes in the corals, which led to a lot of coral mortality; it wasn’t necessarily just the nutrients themselves, but it was removing the fishes and the interactions between the nutrients and the seaweed that were changing the microbes,” Burkepile said.

Burkepile says there are many sources of nutrient pollution: rain, sediment, the runoff of nutrients from farms down into the reefs and even from inadequately processed sewage negligently dumped into the ocean.

An important lesson from the study is that two factors plaguing coral reefs, namely nutrient pollution and overfishing, can be solved at the local level.

Coral reefs tend to be in areas with a large human population, making them especially vulnerable to nutrient pollution due to agricultural runoff. By controlling the amount of nutrients farmers put on their fields, local management solutions can be used to minimize runoff.

Overfishing is already being addressed in places like Fiji at local levels by individual chiefs who regulate the amount of fishing allowed on certain reefs.

Coral reefs also play a significant role in the economy, with tourism in some areas attracting people from around the world to view the beautiful diversity of fishes that live in the reefs. Local conservation management is in tune with the connection between the coral reefs and the economy, so educating local peoples about why regulating their fishing actually benefits their long-term success is important.