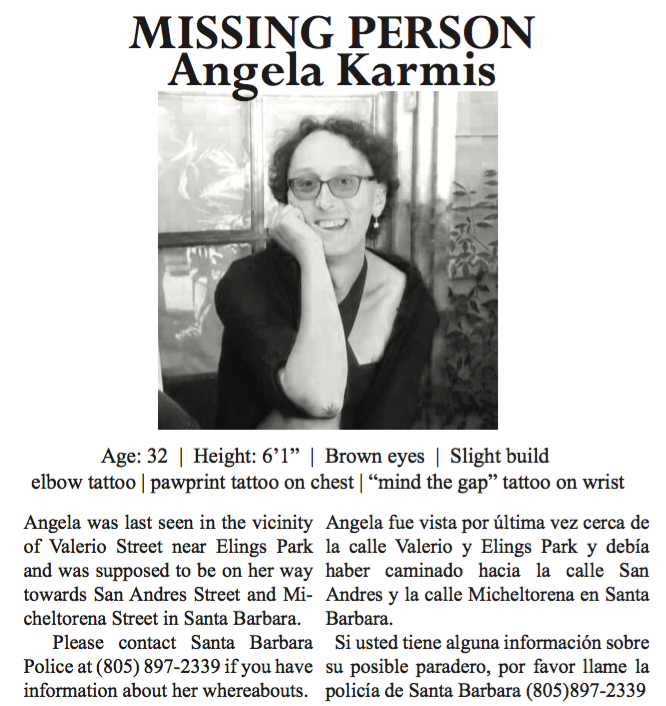 Angela Karmis has been missing since last Friday. Photo via Facebook

Friends and colleagues of a UC Santa Barbara adjunct professor who has been missing since Friday have organized a search mission to take place on Tuesday evening.

Angela Karmis, 32, was last seen on Friday near the Mesa area of Santa Barbara. Karmis left a friend’s house on W. Valerio Street near Elings Park at approximately 9 p.m. and was walking toward the intersection of San Andres and Micheltorena Street, where she was staying at the home of another friend, Justin Steinfadt.

Karmis told her friend that she would be returning to Steinfadt’s house, Steinfadt said, but she never arrived. Following failed search efforts, he filed a missing person report to the Santa Barbara Police Department on Sunday afternoon.

The search group will be gathering at the corner of San Andres Street and Micheltorena Street beginning at 6 p.m. to distribute fliers and walk through Elings Park in search of Karmis. The organizers have also created a Facebook page to recruit additional help. 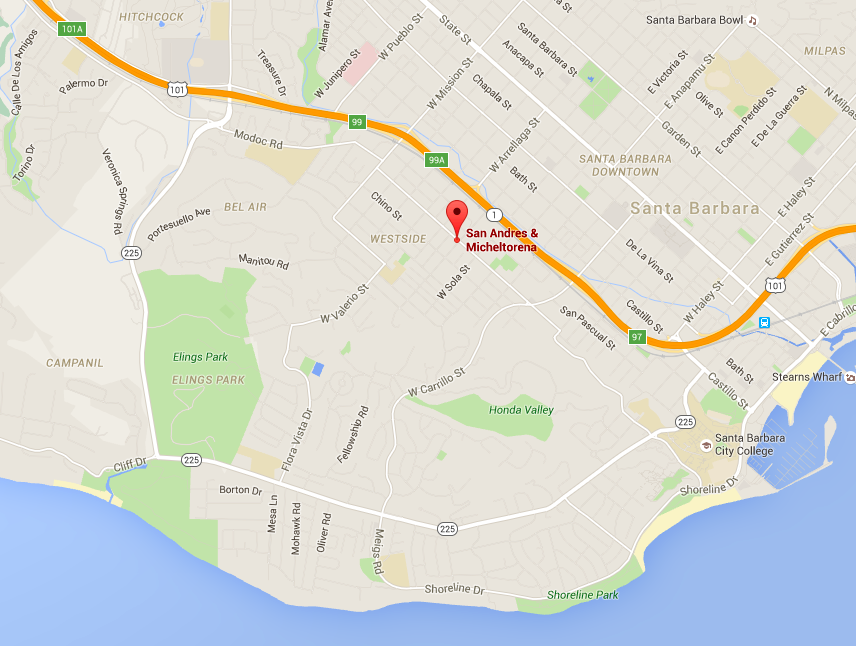 Karmis was last seen on July 15, and was supposed to be walking from a friend’s house on W. Valerio Street toward another friend’s house near the intersection of San Andres and Micheltorena Streets. Photo via Google Maps

Karmis is an adjunct professor in the College of Creative Studies, but is not instructing courses during the summer. She graduated from UCSB with a Ph.D. in physics, and last taught classes during winter 2016, according the UCSB course catalog.

She has active voice on campus and participates in the Transgender Social Club and volunteers at the KCSB-FM radio station as a DJ. She identifies as queer, and hosts a program called “Love Letters from the Submind” to play varied music and discuss issues relevant to the transgender community. The show was last aired on Friday, and Karmis was seen in the KCSB-FM studio that afternoon, according to Ted Coe, the station’s advisor.

Karmis was active on Facebook and Twitter on Friday, but has not responded to messages or been active on social media since then, according to posts made by her friends on Facebook.

Anyone with information regarding Karmis’ location is encouraged to call the Santa Barbara Police Department at (805) 897-2300 or email Sgt. Bryan Jensen at bjensen@sbpd.com.

Update 7:20 p.m.: This article has been updated with a link to the “Help Find Angela Karmis” Facebook group.

Update 7:30 p.m.: This article has been updated with a photo of Karmis’ Missing Person poster.

Correction: The search party was organized on Tuesday, not Monday.

I had her as a teacher a couple months ago. She was very enthusiastic about physics and I loved the atmosphere she created in the class room. I hope she is okay.

Per Facebook page linked in this article, she has been found!

I was never a professor. You can read about my week here gofundme.com/2fqpgbnw