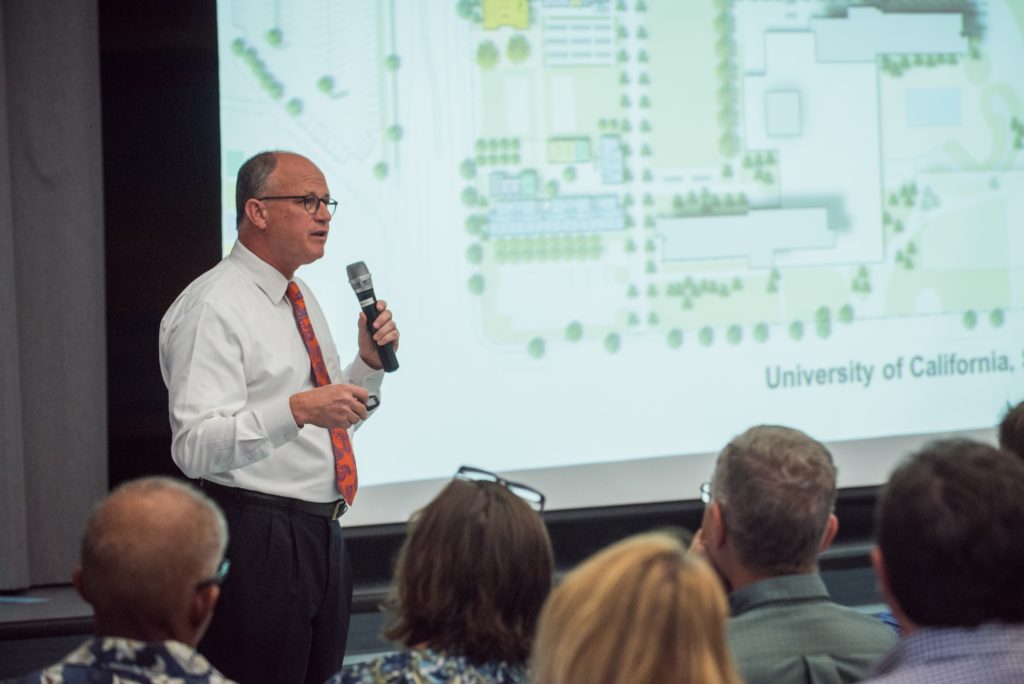 UC Santa Barbara’s ongoing construction at the intersection of El Colegio and Storke Roads has sparked concern from many Isla Vistans who believe children, bikers and drivers will not be safe in the major traffic area.

The crossing is located between Isla Vista Elementary School and the Santa Catalina Residence Hall, whose surrounding areas have been under construction since late last year with the addition of the San Joaquin housing project.

Pedestrian traffic in the area is mainly comprised of college students and children from Isla Vista Elementary School, and UCSB’s long-range development plan projects that nearly 1,000 college students will occupy the area by 2025.

To accommodate for the population increase, the university has begun planning a street system with four new protected crosswalks and a single turn lane between I.V. Elementary and Santa Catalina. The crosswalks will include a signal light for drivers and “walking hand” clearance for pedestrians in the 25 mph school zone.

The new concept replaces one of two existing right-turn lanes onto Storke Road with a “pork chop island,” a raised triangular partition, at the end of a new crosswalk into the Santa Catalina complex. 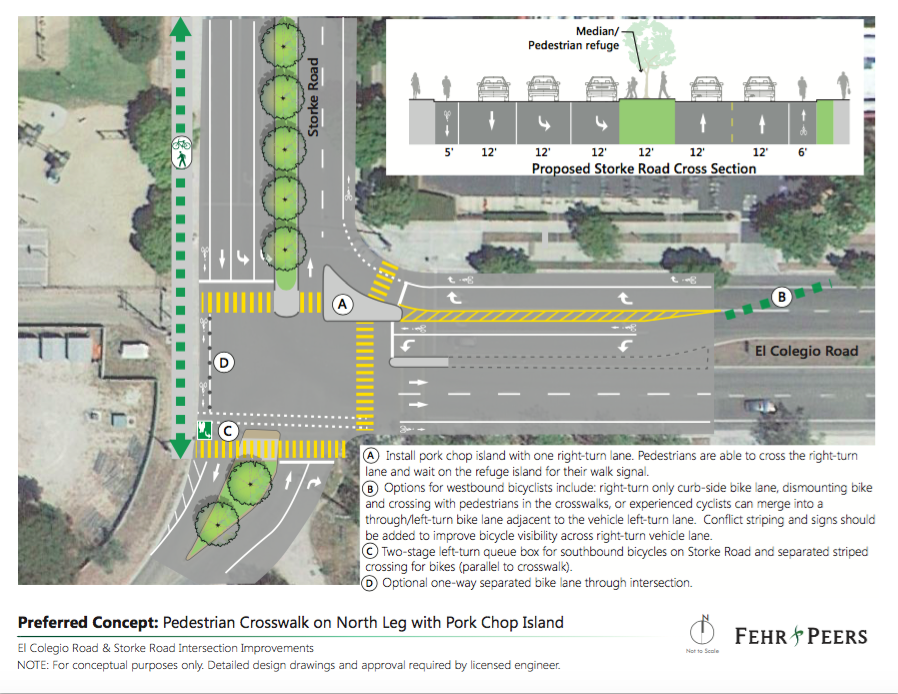 The “pork chop” island, marked (A) will replace the existing second turn lane leading into Storke Road. Courtesy of UCSB

UCSB will experience a shift in population to the west edge of campus over the next five years, and along with a new bike path that wraps around the San Joaquin apartments, the university has chosen the crosswalk plan to create easy access between the two sides of El Colegio and Storke Roads.

“It’s a safety issue for students and staff who will be going back and forth between the two areas,” said Marc Fisher, vice chancellor for administration, speaking to an audience of about 60 Isla Vista and Goleta residents at a town hall meeting in I.V. Elementary on Thursday.

Residents of Isla Vista, however, are concerned that the single turn lane and island will create traffic buildup in the area during rush hour, finals week, move-in and move-out weekends and graduation.

“There’s so much for them to figure out, and they’re so little,” said the mother of an eight-year-old child who attends the I.V. Elementary. “It’s overwhelming. Just to think about my child crossing all these areas … I don’t think he’ll be able to do this kind of stuff.”

One meeting attendee insisted that the current plan furthered “the college interest and not the elementary school interest,” and another suggested that the most logical, long-term solution to benefit the community was a pedestrian bridge.

“What has happened to those cones [at the intersection] will happen to our children,” said Felipe Garcia, a 20-year resident of I.V. “Every single one of those cones has been hit.”

According to Derek Rapp, a Stantec engineer who is overseeing the construction, the company considered children when drawing up their plans, and the crosswalk will work to improve an already low statistic of four accidents at the intersection in the past five years.

If the proposed changes come to fruition, I.V. Elementary will potentially need two more crossing guards, and several students who live at Santa Catalina and San Joaquin will be directed to park at Lot 50, Lot 30 and Lot 38 to decongest the intersection.

Fisher also said that the university will place a “de-emphasis on cars and a strong emphasis on bicycle and bus circulation” as over 3,000 beds are added to Santa Catalina and San Joaquin housing over the next year.

The university is paying for construction and design of the new project and Santa Barbara County has the authority to approve all necessary permits. The construction is projected to be complete by the start of the I.V. Elementary school year on Aug. 23.

“Our goal is to get this up and operational for this fall, so it needs to keep moving,” Fisher said. “Personally, I feel this is going to be far safer than the current condition.”