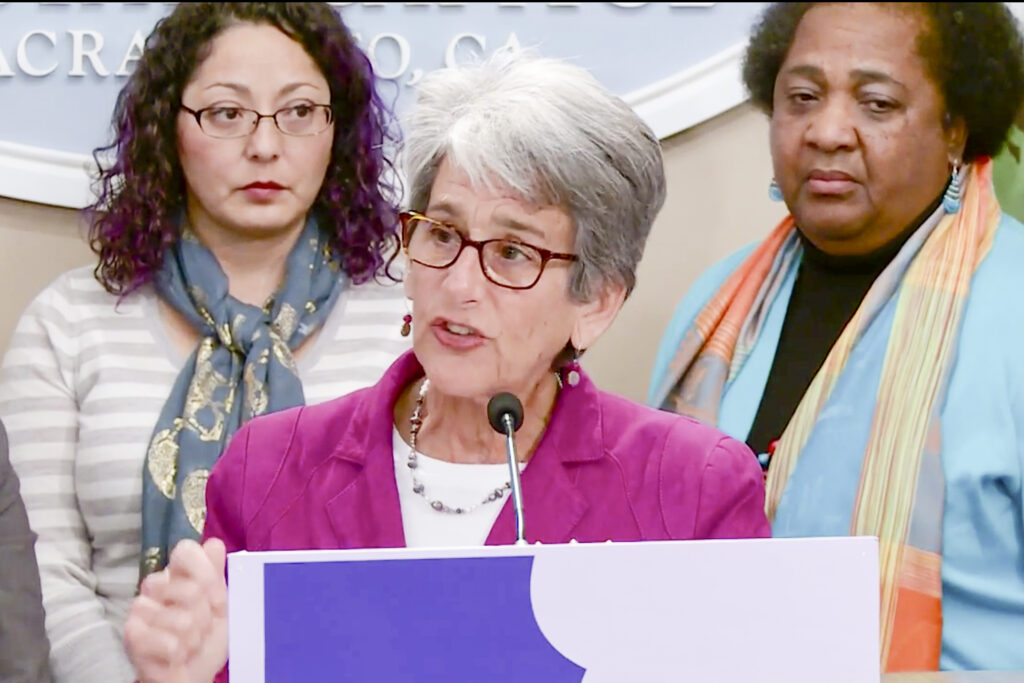 Gov. Jerry Brown signed into law Tuesday a bill that will replace longstanding legal language in California with words that aim to properly recognize gender equality.

Senate Bill (SB) 1005, written by Senator Hannah-Beth Jackson (D – Santa Barbara), mandates that “gender-specific terms” in California laws such as “husband” and “wife” be replaced by the term “spouse” when referring to married couples. The changes are intended to be inclusive of all couples in registered domestic partnerships.

Jackson introduced the bill in February and received overwhelming bipartisan support on both the State Assembly and Senate floors, with the 80-member assembly voting 63-1 in favor of the bill and the 40-member senate voting 34-0.

“The promises of equality are something that we need to make sure are realized so that members of the LGBT community have equality, [so] that there is gender equality and racial equality,” Jackson said.

“As a lawyer and as the chair of the Senate Judiciary Committee, I’m particularly aware of the importance that our language reflects the laws as they exist, and marriage equality is now the law of the land,” she said.

Jason Howe, Director of Communication for Equality California said the bill is an important step toward “full equality.”

“We’ve been living one reality,” he said, “But in the law books, it really doesn’t reflect the current state of affairs or full respect for same-sex married couples.”

Although same-sex couples have been allowed to marry in California since 2008, Howe said the decision has not been reflected thoroughly in the state’s legal code until Jackson’s bill came to fruition.

“Throughout the law books, there are many places that refer to ‘husband’ and ‘wife,’” Howe said. “SB 1005 makes clear that domestic partnerships are to be given the same rights and responsibilities as marriages.”

Despite the success of the legislation, Howe said the LGBTQ community still “suffer[s] serious disparities compared to the non-LGBT population” in terms of treatment by health professionals and law enforcement.

David Whitman, Director of the UCSB Resource Center for Sexual & Gender Diversity, said he hopes to see more legislation passed in the coming years that focuses on the rights of the more marginalized groups in the LGBTQ community, such as undocumented and transgender members, who need better treatment in immigration detention centers and more “comprehensive” healthcare.

“The more marginalized folks continue to experience issues with the law and the legal system here in California,” Whitman said.

According to Howe, Senator Jackson has remained diligent in working for LGBTQ rights throughout her term and has received an equality score rating from Equality California of 100 percent for her efforts within the community.

“She has certainly been a strong ally for the LGBTQ community,” he said. “We’re very grateful to Senator Jackson for bringing forward this legislation.”

Jackson hopes other states will eventually pass legislation similar to her bill, but she suspects there will be “resistance” from some states that do not recognize marriage equality as the law.

“I think right now our laws are on the books, but we really need to make sure that the laws are implemented,” she said. “A lot of this … is just changing the culture and making sure that people not only have the legal right to equality, but are treated equally and respectfully.”

“If we are going to advance as a state and as a nation, we have to treat each other with greater respect and compassion and kindness, regardless of what we look like, what our gender is [or] sexual orientation,” she added. “We need to do better with each other.”

Californians can expect to see the language changes implemented through SB 1005 in effect this year through the next update of the legal code.