With a sweet mixture of ’60s glam pop and whimsical lyricism in the impeccable Dopamine album, BØRNS has ignited a revolution of psychedelic disco that conjures up timeless rushes of pleasure. Each track from Dopamine evokes a blossoming progression of the intimacy one derives from a muse. Garrett Borns embraces an ethereal persona that echoes the stylistic influences of Bowie’s “Space Oddity” era. Dopamine, which can be considered a concept album, has catapulted BØRNS into the festival circuit, an ongoing global tour and a flood of new fans from every corner of the world. Recently, BØRNS covered Zayn Malik’s “It’s You,” reviving the single into a falsetto-driven ballad laced with a warm piano track. The combination of BØRNS’s versatile musical wizardry and aloof personality hints at further success in the 21st century artistic realm. I had the chance to have a conversation with Borns himself, the creative voice behind the eponymous BØRNS project, chatting about everything from the chase of love to the underlying inspirations behind his recent After Dark Sessions. 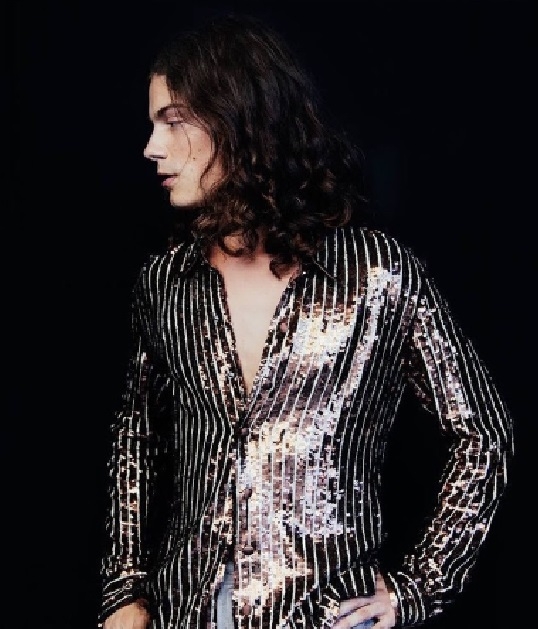 Daily Nexus: Your personal style is very reminiscent of David Bowie’s The Man Who Sold the World album artwork. Also, I have to give you props for embracing the Penny Lane aesthetic. If you could go back in time to be present at any event in any era, where would you go?

BØRNS: Thank you! I’d probably be present during the Saturday Night Fever era — the height of disco — where I can just strut down the street in tight jeans and sing in my falsetto. But I mean, I do that already.

DN: Is there a designated area you go to write lyrics and derive inspiration?
BØRNS: I write lyrics on the fly when I’m typically in the studio. I recorded a majority of the album in Los Angeles. I like the lyrics to come out as effortlessly as possible. I mean, lyrics are definitely important to me, but I also don’t like to think too hard when it comes to songwriting because then lyrics will get kind of diluted. Sometimes the lyrics will come to me at the most random of times and later I will go in and edit them.

DN: A lot of the lyrics on Dopamine have this romantic essence. Do you think the chase of love is easier than remaining in love?

BØRNS: [laughs] That’s a very good question, but I think that’s a question we’re all trying to answer, isn’t it?

DN: Remaining on the concept of love, I have noticed that your fans give you bouquets of flowers on stage and sing back every lyric to you; in a sense you are their muse. How have stage connections with your fans contributed to your musical journey?

BØRNS: It’s very inspiring that people have listened to my music enough to memorize the lyrics and sing them right back to me. Just performing and having people sing along is all very flattering.

DN: What is the most memorable festival set you’ve played so far in 2016?

BØRNS: I’d have to say Hangout Fest in Alabama where I performed just a week ago. There was a crazy Code Red storm coming in and everybody had to find shelter and it was right out on the ocean. The waves were going crazy.

DN: Do you get the concept for a music video while you’ve already written lyrics, or do the visuals come before the conception of the lyrical content?

BØRNS: In a sense, yes. I always want everything to be pretty visual when I’m writing lyrics. If I can’t visualize it, then there’s something wrong. I’m not saying it clearly or simply enough. But yeah, a lot of the times I get a video in my head. They just kind of start out as daydreams, not really videos.

DN: What is the inspiration behind the After Dark Sessions with the combination of string instruments, mannequins and the Victorian red velvet imagery?

BØRNS: That came partly from these private shows in the ‘70s that Hugh Hefner did (he’s the Playboy dude). He put on these private shows at his penthouse and had packed parties and these bands from the ’70s would play. You can find those videos on YouTube; they’re all pretty cool. I just wanted to do something that was an homage to that.

DN: I want to take you back to when you were 19 doing the TED Talk in Grand Rapids and you stated that there is always a connection of music despite the language barrier in France. So will we ever be seeing you incorporate various languages into your future music?

DN: What advice would you have given your 19-year-old self?

BØRNS: I don’t know. I look back at my 19-year-old self and I didn’t know anything, but I’d keep telling myself to make mistakes until you figure things out.

DN: You recently covered Zayn’s song “It’s You” (which, I might add, beats the original). What artist would you want to cover a song off Dopamine? I think it’d be pretty cool if Tame Impala covered “Fools.”

BØRNS: Ooh there you go, that’d be a good one. Probably some sort of lounge singer. That’d be pretty cool. Or Burt Bacharach.

DN: One last question: Will you ever release a studio version of the song “Broke”?

BØRNS: [laughs] Probably not. There will always just be a bootleg version of that.

If you’re looking to be enchanted by BØRNS’s artistry and his ability to transcend beyond the microphone, get on a flight to the East Coast this summer and check out his set at the Shadow of the City festival.