The creators of Help the Boat People hope the shocking nature of the game will spread awareness about the ongoing refugee crises in Afghanistan, Syria and South Sudan 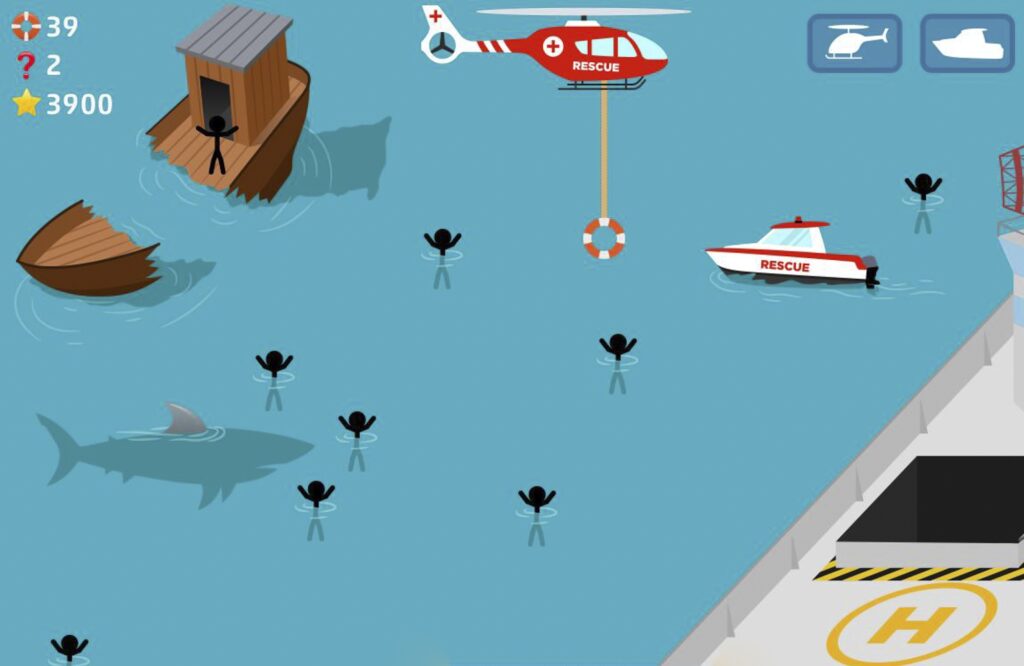 Shown above is the Help the Boat People game in action, wherein players can drag, drop or flick the “boat people” to safety as they try to escape sinking boats. The game hopes to make players reflect on refugees and asylum seekers. Courtesy of the App Store

Nic Cann, a UCSB alumnus from Melbourne, has created a smartphone game to help alleviate an ongoing international refugee crisis.

In Help the Boat People, players must rescue refugees falling from a sinking wooden boat by placing them onto a processing portal on a Navy ship. Cann, who graduated in 2008, is the co-founder of Nictionary Games and produced the game through his nonprofit organization.

According to a recent United Nations refugee report, 65.3 million people worldwide have been displaced because of conflicts in regions such as Afghanistan, Syria and South Sudan.

“We’re lucky enough to live in a country that is not war torn, nor do we face any struggles even similar to what these people face,” Cann said, explaining that his Australian team created the game because they were keenly aware of being born into privilege.

Cann said he is aware that the game is “controversial,” responding to the possible criticism that a game based on drowning refugees trivializes human tragedy, but insists that the game is committed to reinforcing the seriousness of the crisis.

“At the end of the day, it is a game, and we strictly make note at the opening of the game that although it may be fun to play, the game explores a very real issue,” Cann said.

According to Cann, the shock factor of a game is based on the real-life deaths of refugees, and is necessary to draw attention to the cause.

“Without the controversy, we won’t get the attention required to drive much needed funds to a good cause and generate awareness,” Cann said.

The game is available on iOS and Android for $2, and Nictionary Games is currently allocating profits to the Refugee Council in the United Kingdom and The Asylum Seeker Resource Centre in Australia, although the company is open to work with other charities that globally support the cause, Cann said.

“We created the game to open a new donation channel to users and to get people thinking and talking about refugees and asylum seekers,” said Nick Humphreys, Nictionary’s co-founder.

However, Cann noted that while there is increased awareness of the refugee crisis, particularly in his home country, this is unhelpful unless it leads to action.
“Coming from Australia and having spent a significant amount of time in the UK, the refugee crisis is regularly headlining the news,” Cann said. “More often than not, people speak about it, but nobody actually does anything to help the situation.”

Smartphone games are a particularly effective means of assisting refugees, Cann said, because they are popular and reach a younger demographic not usually targeted by activist causes.

“Smartphone games are the most downloaded apps of any, therefore, we knew this would be a good method to raise funds and create awareness,” Cann said, “Also, we wished to reach an entirely new demographic of people and through a smartphone game we are most definitely doing that.”

According to Nictionary Games, future games from the organization will focus on supporting Paralympians, promoting sexual health and raising awareness for the plight of endangered animals.

A version of this story appeared on p.4 of the Thursday, June 23, edition of the Daily Nexus.

Did you add a feature where the refugees become radicalized, commit mass murders and pledge allegiance to ISIS? Because if not, this game might as well be a Disney game set in a fantasy world.