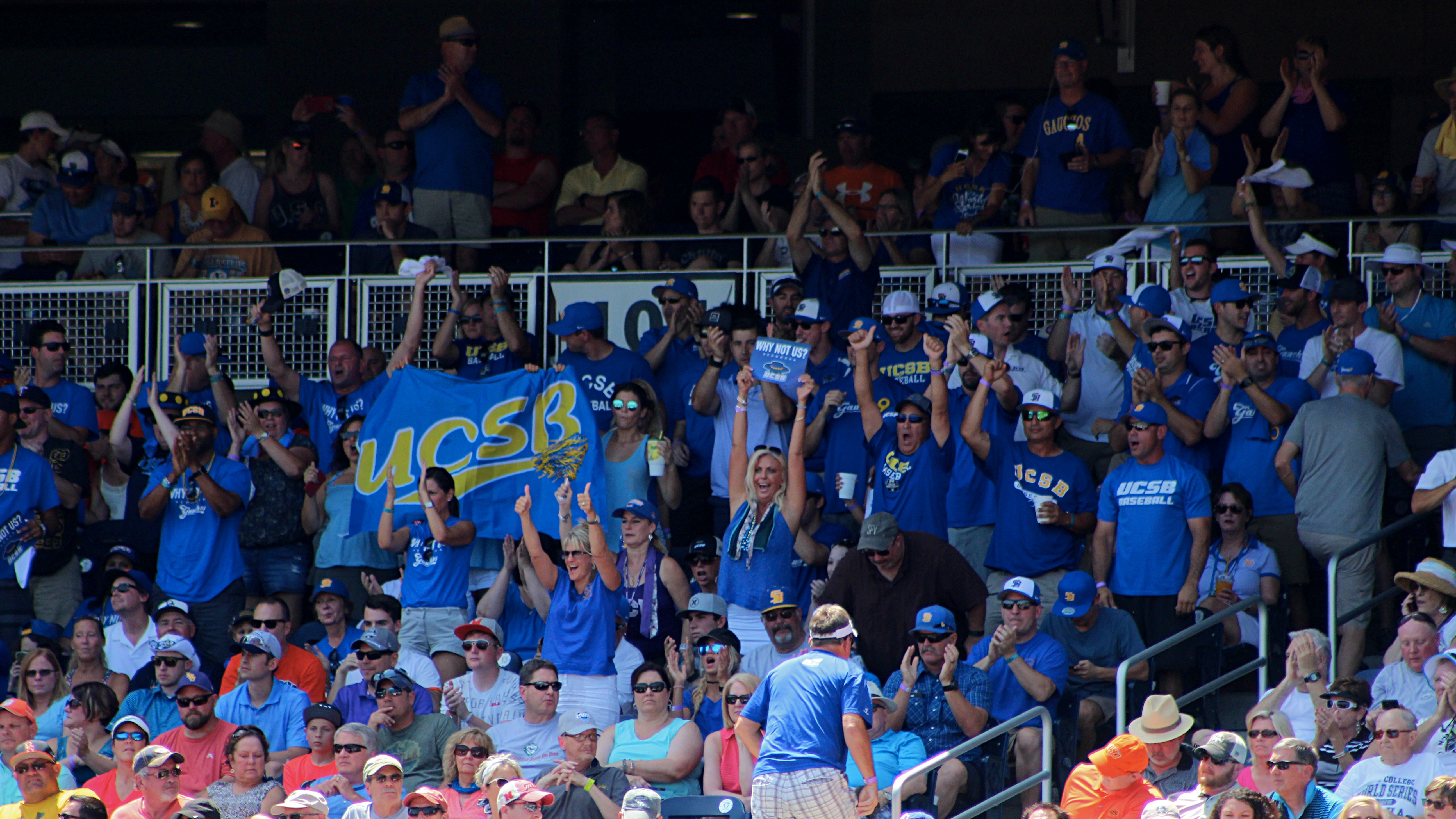 Facing elimination for the first time this postseason, the UCSB baseball team responded in a big way by defeating the University of Miami 5-3 in Monday’s match to stay alive in the College World Series.

The win improves the Gauchos 43-19-1 on the season, but more importantly keeps them in contention for a championship finish. The loss for the Hurricanes ends their run as they finish with a final record of 50-14 on the season. This was only the second time in their 25 College World Series appearances that they did not register a win at Omaha.

Santa Barbara was able to stay alive in the tournament thanks in large part to freshman pitcher Noah Davis who went six innings with three strikeouts and allowed only two hits and one run.

It was junior catcher Zack Collins who earned the run off of Davis as in the first inning, with two outs, he hit solo home run to right field to give his team the early 1-0 edge. Collins finished the day 2-2 (1.000) with two RBIs and one run.

The Gauchos would respond in the bottom half of the inning as redshirt sophomore JJ Muno hit an RBI single to right field. Muno came up big for UCSB in this contest, finishing 2-4 (.500) with one RBI and one run. He was one of two Gauchos to record more than one hit on the evening and have an extra base hit. 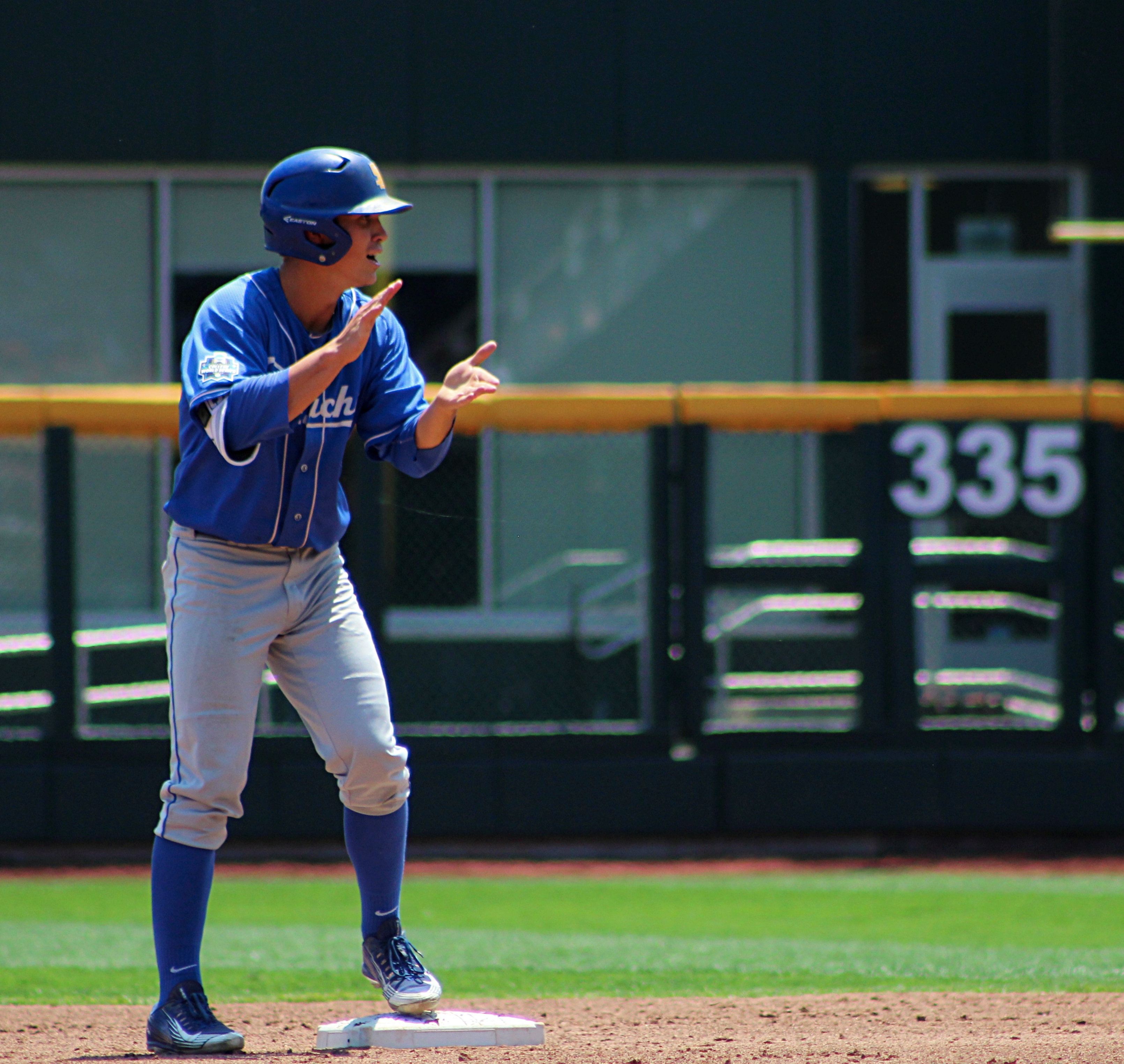 Redshirt sophomore second baseman J.J. Muno went 2-4 with one RBI and one run to help lead his team to victory. Devin Wilber / O’Colly

After surrendering the early run, Miami pitcher Danny Garcia went on to only allow one hit until the rain came and delayed the game for an hour and two minutes in the bottom of the sixth inning with no outs and a runner on first for Santa Barbara.

When play resumed, Garcia quickly struck out sophomore Austin Bush who has been struggling as of late. The first baseman finished the day 0-3 with one walk, and has gone 1-11 (.090) over his last three games.

After Bush, the Gauchos responded with a huge four run spurt before the inning came to a close. After a Muno double and a Dempsey Grover walk, the bases were loaded for junior Ryan Cumberland who came in clutch with a two-RBI single to right field.

Miami attempted to come back in the eighth inning where it was able to score two runs, courtesy of junior Randy Batista and Collins’s RBI singles to make the game 5-3. The two scores were credited to sophomore left-hander Kyle Nelson who came in the game in the seventh to replace Davis.

However, in the ninth inning Nelson made quick work of the Hurricanes and ended their season with a 1-4-6 double play. The lefty finished the game allowing five hits and two earned runs but was extremely efficient at the plate as 30 of his 46 pitches were strikes.

All-in-all it was another solid postseason performance from the young Gaucho team. This was the first College World Series victory in UCSB history and the fans were sure to celebrate it loudly.

When you win your first #CWS game in program history… #CWShttps://t.co/jmGUmzYQOt

It was a good sign to see Santa Barbara play well even when on the brink of elimination, but the question is, can it continue that for three more games?

Even so, this season has been amazing for UCSB and it continues to accomplish great feats as it has now eliminated both the No. 2 team in the nation (Louisville) and the No. 3 team (Miami) from the tournament. It’s safe to say this team does not shrink when facing elite competition.

The Gauchos next game is another elimination match against the loser of Arizona/Oklahoma St. on Wednesday, June 22 at TD Ameritrade Park, in Omaha, Neb. at 4 p.m. PDT. The game will be televised live on ESPN and streamed on the WatchESPN app.

Update: Oklahoma St. defeated Arizona 1-0 in Monday Night’s winners match meaning the Gauchos will face the Wildcats in their second elimination game. The winner of Arizona/UCSB faces Oklahoma St. and has to defeat the Cowboys twice in order to advance to the championship round.