The Daily Nexus
News
Sorority and Isla Vista Pastor Honored by Red Cross
June 2, 2016 at 12:05 am by Nicholas Bogel-Burroughs 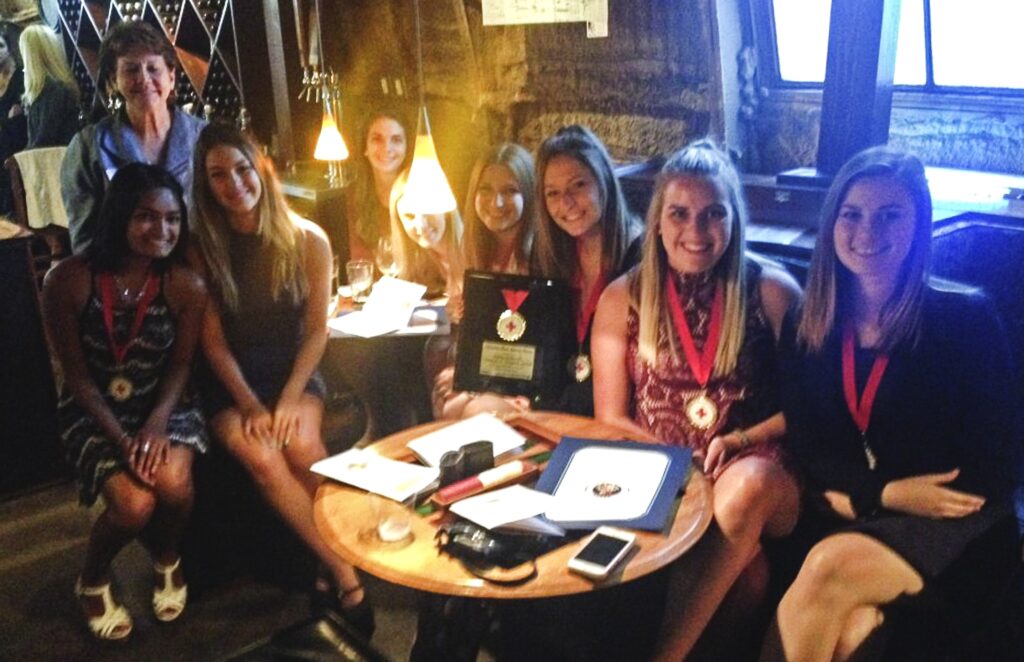 The Alpha Delta Pi sorority at UCSB has hosted blood drives for the last five years, bringing in dozens of donors and hundreds of pints of blood. Courtesy of Morris Franklin

The American Red Cross honored the Rev. Jon-Stephen Hedges, the pastor who was assaulted by a UC Santa Barbara student in his Isla Vista home last month, and the Gamma Xi chapter of the Alpha Delta Pi sorority on Wednesday night.

The sorority, established in 1950 as one of UCSB’s original seven sororities, has been hosting blood drives for the last five years as part of its philanthropic work. The sorority was awarded the Lifesaving Blood Hero award for its members’ efforts.

For the last two years, the Alpha Delta Pi has held a blood drive in both the fall and spring quarters. During its most recent blood drive, 87 students and Isla Vistans donated hundreds of pints of blood to the Red Cross.

“It is a constant need in our community,” Danielle Moss, the sorority’s philanthropy chair, said, having donated blood since she was first eligible in high school.

Whitman noted that the Red Cross is one of the sorority’s many philanthropic endeavors. Alpha Delta Pi regularly fundraises for the Ronald McDonald House and has members participating in charity dance marathons and UCSB’s Relay for Life, which raised nearly $10,000 for cancer research.

Moss said the blood donations were successful, in part, because sorority members “blasted it all over social media,” saturating students’ news feeds with information about the drive. She said it was an honor to be rewarded by the greater Santa Barbara community, adding that Greek life is often subject to “bad media coverage.”

“It’s amazing to be recognized outside of UCSB,” Moss, a third-year sociology major, said. “Sororities are one of the most social circles, and you can either put that to waste or use the power of numbers to give back.”

The Red Cross also awarded Hedges, known locally as Father Jon, and four other chaplains with the Disaster Services Hero award. Hedges, who volunteers as a chaplain for Isla Vista Foot Patrol and other agencies, is a UCSB alumnus and has lived in Isla Vista since 1968.

Hedges was assaulted in May by a UCSB student, Paul Gusman, who forced his way into the reverend’s house and repeatedly punched him in the face. Hedges said he believes Gusman is “a good kid” and that drugs “took over him, and that’s a game changer for his life.”

Hedges mentioned the 2014 Isla Vista shooting as an example of when chaplains are vital to emergency workers and community members suffering from a tragedy.

“We get called in those moments not to be all religious, but to be a calm presence,” Hedges said. “I’m not there to teach Sunday school, I’m there to be more of a psychologist.”

The Rev. Mort Ward, who advises all Red Cross chaplains in the Central Coast area, presented the award Wednesday night and encouraged attendees to keep emergency respondents in their thoughts.

When pulling over for an ambulance or fire truck, Ward said, “if you’re a person of faith, send a prayer and, if not, send a good thought.”

“The people you see to my right,” Ward said, motioning to the chaplains at the front of the room, “take that prayer or good thought a step forward … because that is what is so desperately needed at that moment.”

A version of this story appeared on p. 6 of  the Thursday, June 2, 2016 print edition of the Daily Nexus.