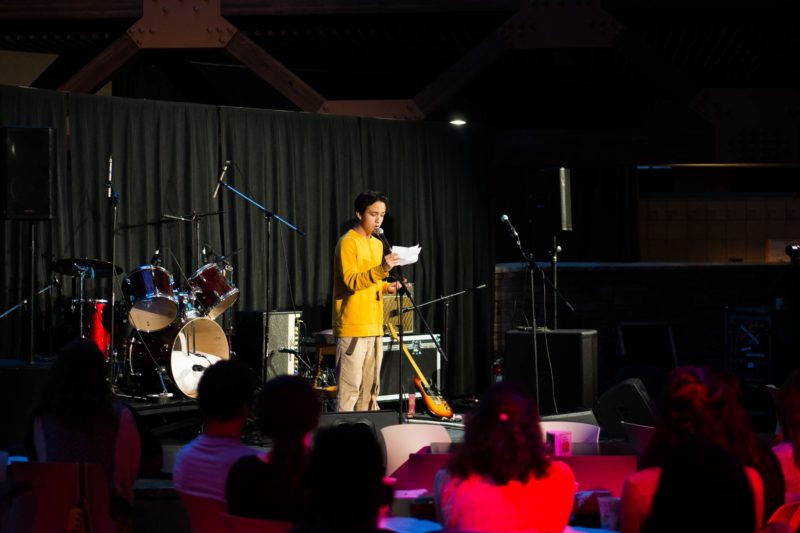 Warm spotlights, chill vibes and supportive snapping encompassed the UCSB Poets’ Club’s showcase, “Dope Metaphors.” Even before a considerable audience gathered and the event fully kicked off, a thorough sound and mic check by the musicians and the poets showed that these people take their niche art seriously. Ample speakers and monitors were enough to fully capture each and every syllable that escaped the lips of the performers. It was a quiet venue coupled with a small audience, but that did nothing to diminish the beauty of the poetry and music the performers produced that night.

In the midst of the crowd on the night of May 22, a student wearing a mustard yellow sweater jumped around with recognizable energy and authority. This was understandable since he was Frankie Cunningham, founder and leader of the Poets’ Club. Cunningham, a fourth-year chemical engineering major, said he was “inspired by a class called ‘Poetics of Struggle,’” he took in 2014 which taught spoken word as performed poetry. After the class was discontinued, Cunningham said he “decided to form the club to continue having this outlet, this form of expression.”

The quarterly held Dope Metaphors event is, according to Cunningham, the club’s “way of inspiring everyone throughout the entire quarter to really, like, put their best foot forward and express something they really, like, need to get out … We’re really focused on the philosophy of expression in itself rather than, like, poetry specifically. Right? It’s really about expression and performance, and so Dope Metaphors is really about showcasing everything we’ve worked on throughout the quarter.” 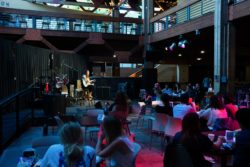 Other students from that same course helped Cunningham form the club, including Sam Crane and Jason Chun; all three were major personalities of the night. Chun, a second-year English major, said he joined the club “[wanting] to keep fostering that creativity with other people … We’ve come a long way.”

A total of 19 performances were featured, including three musical performances and one surprise guest. An array of deeply personal topics were covered in the poems, several referencing emotions many college students experience, such as frustration, unrequited love and lust. An impressive amount of opinions were also offered on how ethnicity and race operate within present day social structure. Carlos Ortega, among other poets, spoke of his experiences as part of a minority race, as he comes from a predominantly Latino neighborhood. One of Crane’s poems, “Waterfalls,” dealt with the issue of self-harm and all the emotions and thoughts surrounding it. Alec Hartnett, giving both spoken word and musical performances, delivered an intimate piece about his love for his two brothers.

The surprise guest, Keith Mar — who heard of the event — knew Cunningham from the same Poetics of Struggle class they both took in 2014. Mar delivered a powerful poem, “Erasure,” about his struggle to accept his identity as an Asian-American living within the U.S. In trying to feel accepted by a largely white society, Mar found himself erasing his own culture, his language and thus his identity. Mar and his wife Kathleen Baggarley both perform spoken word recreationally, and she mentioned that her husband wished to join the club despite not being a student of UCSB, hoping it was a possibility. 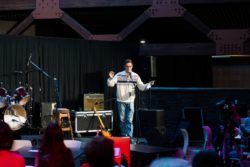 The three musical acts included one drummer-guitarist duet, the Trashcan Kids, and two female singer-songwriters, Slammin’ and Caiti Hopkins. Both singers had distinct, husky, smoky voices and personally written songs. Katie Michael, production assistant for A.S. Program Board and videographer for the event, said, “Honestly, every time I’m blown away by the performances here … [Hopkins’s] musical performance was absolutely beautiful. Her voice is incredible and enticing and her lyrics definitely hit home.”

To offset many of the serious subjects that the poems covered, Crane’s emceeing was humorous and entertaining enough without being excessive. Chun finished off the showcase with one of the stand out poems of the night: his piece, “Everything Was Beautiful, and Nothing Hurt,” spoke of hating the superficiality of most conversations. With the blooming of these artists, poets and musicians alike, all speaking of issues that need to be discussed, the Poets’ Club has demonstrated itself as the perfect community for all artists to fully express themselves. It was a thoroughly entertaining night and for anyone interested in knowing the discourse going on at UCSB, Dope Metaphors is the best place to be. Thinking of the future of the club, Cunningham said, “I really hope to attend Dope Metaphors in the Hub in 10 years; that would be fucking incredible. The thing is, I know there is a huge culture for poetry that exists on this campus, but the nature of poets is that they don’t like to talk about their poetry; it’s personal, it’s emotional.”