The Daily Nexus
Sports
UCSB Ends Regular Season With Disappointment
May 30, 2016 at 5:00 am by Jorge Mercado

The No. 19 UCSB baseball team had a disappointing finish to the season after losing its series final at Caesar Uyesaka Stadium to UC Riverside. 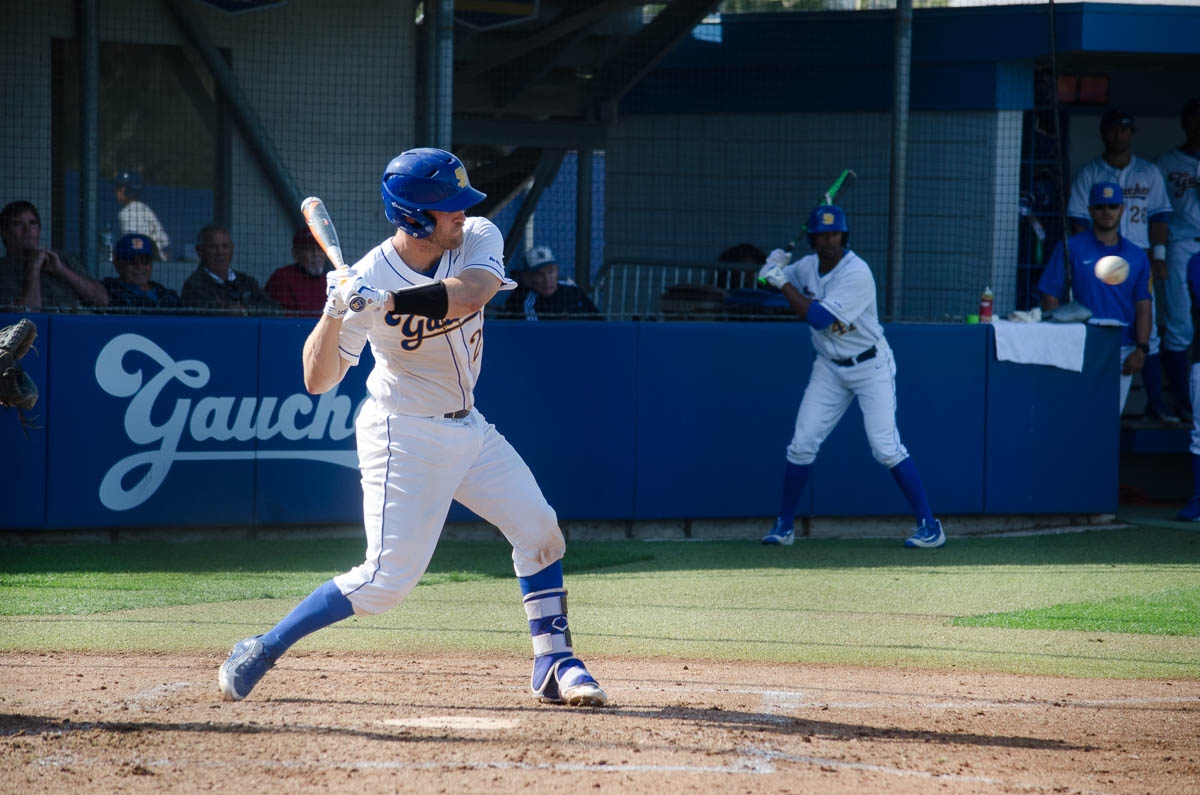 UCSB closed the season on Saturday at home but had a very disappointing outcome, as it was shut out for only the second  time this season with the final score being 6-0. It was also disappointing for the two seniors, third baseman Ryan Clark and pitcher Justin Kelly, as they lost their final home game.

“The guys were trying but UCR played really well,” Head Coach Andrew Checketts said. “We couldn’t capitalize on some plays. It was one of those games.”

UCR took an early 1-0 lead after the first inning; then both teams traded scoreless innings until the fourth. The Highlanders then blew the game open in the fourth and fifth innings as they scored two runs in both innings to take a 5-0 lead after five innings.

After adding one more run in the eighth inning, which would be the final run of the game for both teams, the game felt out of reach not just because of the 6-0 scoreboard but because of the lack of consistency on the Gauchos’ side.

Clark and Kelly had decent outings in their final home games of their careers. Clark was one of only four Gaucho hitters to register a hit on the evening, while Kelly went 2 2/3 innings deep striking out four batters while also surrendering four hits and two earned runs.

For UCR, junior Mark Contreras had a solid day going 3-5 (.600) with one RBI and freshman infielder Yeager Taylor hit his third home run of the season to end his first year on a high note.

Before a frustrating loss to end the season, UCSB’s Shane Beiber battled hard for his team on the mound and led his team to a 2-1 victory to tie the series up for the time being.

Santa Barbara was in control for most of the game as it scored one run in the second after an error by the visiting team and one in the forth after redshirt sophomore Josh Adams hit an RBI single to score catcher Dempsey Grover.

Beiber was also amazing for his duration as he pitched an almost full game. In his 8.2 innings, the right-hander allowed six hits and one earned run, which came in the top of the ninth.

UCR attempted to make its comeback in the ninth inning as redshirt senior Drake Zarate hit a home run to make the score 2-1. After the home run, the Gauchos brought in their ace reliever, redshirt sophomore Kyle Nelson, to get the final out which he successfully did to get his eighth save of the season.

Beiber picked up his Big West best 11th win of the season and became the first UCSB pitcher to pick up that many wins in a season since 1983. It was also his 22nd career victory, which is tied for third best in program history.

Before that solid victory, the Gauchos started the series off the wrong way as they played a sluggish game that led to a frustrating and disappointing 3-1 loss.

UCR got off to a quick start as Contreras hit a sac fly RBI to get his team on the scoreboard first. In the fifth frame, the Highlanders added two more runs thanks to junior Aaron Cisneros’ RBI single and Taylor’s sac fly RBI.

The Gauchos responded with a run in the bottom half of the fifth courtesy of Calica’s RBI single.

However, that would be the only life UCSB could find all day as in the final four innings it was shutout not only on the scoreboard but on the hit column as it could not muster a measly single.

Junior Austin Sodders had a great game for UCR picking up his sixth win of the season after allowing only six hits all game and one run in seven full innings of play. Alex Fagalde finished the game in the ninth to pick up his third save of the season.

Overall, the Gauchos had arguably their worst weekend of the season as they only scored three runs in three games while only registering 17 hits.

It definitely was not something the team wanted to have as postseason play approaches, but it did, and UCSB will try to power forward and try to do some damage if it gets into the tournament.

“We have to come back together and play well.” Checketts said. “Some guys are getting frustrated and we just have to regroup.”

The NCAA will announce their 64-team tournament at 9 a.m. PST Monday, May 30.