The Daily Nexus
Spoken Word and Poetry
Rudy Francisco Shares Truth in Poetry
May 26, 2016 at 5:02 pm by Zoe Jones 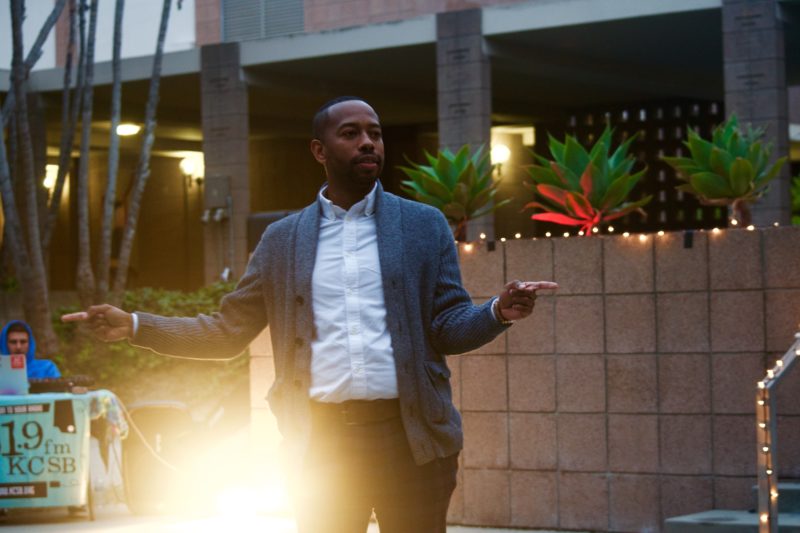 R&B jams, Christmas lights and early-onset June Gloom set the scene for last Wednesday’s poetry night hosted by Alpha Phi Alpha and the Poet’s Club. Nathan Moss, the host for the night, stepped up to the microphone and gave a charming introduction stylized as a poem. The event was smartly structured; the first hour was a showcase featuring members from Poet’s Club, and the second hour was slated for Rudy Francisco’s set. As I later figured out, Francisco was sitting in the audience the whole time, watching the young writers fearlessly perform their pieces.

One performer that has certainly mastered a sense of confidence onstage is Sam Crane, a member of both Poet’s Club and AΦA. He wove intricate, dark pictures of youth and loss through sophisticated, artful metaphors. His developed style and prowess of the spoken word were quite evident in his command over the microphone. The most interesting piece, however, was from Evan Davis, who mixed performance and poetry to talk about sexual frustration, awkward encounters and feet. His comical delivery and erratic movement garnered laughs all around the room. Lesson one of the night: not all poetry is created equal.

Another short introduction preceded the second half of the night, and Rudy Francisco wasted no time making his way to the stage. Francisco is a San Diego native who used to work as a statistical analyst. Three years into a Ph.D. program, he decided to abandon the career and schooling to do poetry full time. His warm personality took the chill from the air immediately, and his first priority was encouraging audience participation. He welcomed snaps and cheers from everyone, perhaps because he was aware of the response that his pieces were going to evoke. 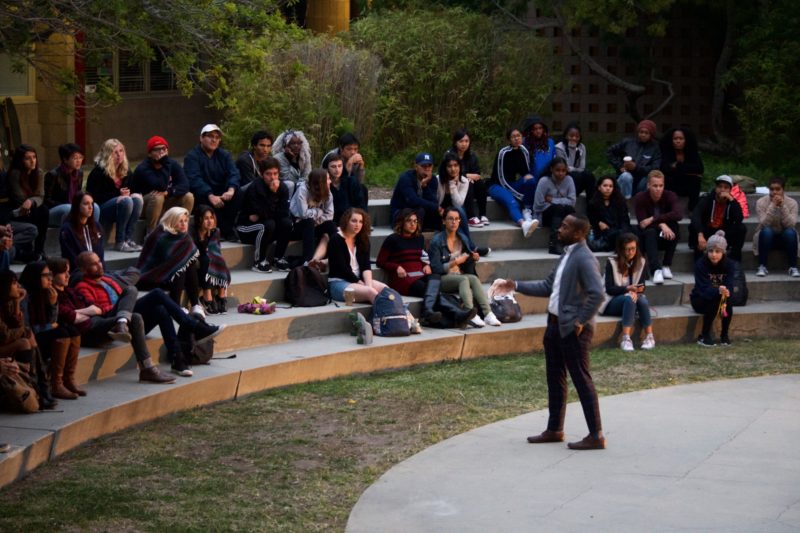 After doing a series of short poems to warm up, Francisco launched into his long-form, slam-inspired pieces. The first was about his high school crush and what he would tell his younger self while falling in love. “We swallow earthquakes and tremble at the smell of perfume,” he said quietly, striking a nerve with all in the room who had ever struck out with a crush. As many poets do, he started off as an awkward teen writing for class assignments. He kept writing throughout college, and one night a friend secretly signed him up for an open mic night. That performance changed his life: It was the night he realized that he wanted to spend the rest of it performing.

Francisco wove his way through his set, peppering the spaces in between with anecdotes about how his writings are birthed: breakups, workshops and random thoughts were all catalysts for poems. “Loving you was the last thing I really felt good at,” he sighed in a poem about a failed relationship.

His most evocative and most controversial poem is on the hateful nature of people that use God as a justification to preach hate against queer people. He addressed the piece to religious extremists directly, and in the most powerful moment of the night he shouted, “Your god stole my god’s identity.” Sexuality, gentrification and being black in America were his heaviest themes of the night, but he never weighed down the crowd.

As I made my way over to Francisco, there was a line of other people with the same idea as me. When I finally got to the front, I stumbled over my words in an attempt to sum up my gratitude. As a writer and a poet, I felt inspired by him in a way that I haven’t in a long while. So I gave him the monumental task of summing up the reason why he writes in a few words. He looked at me, chuckled and gave a thoughtful pause. Lesson two of the night: “I write my story because if I don’t, who will?”