The Daily Nexus
News
Campus Declared Safe After Threat Directed at ‘Feminism Is Cancer’ Event
May 26, 2016 at 10:25 pm by Nicholas Bogel-Burroughs 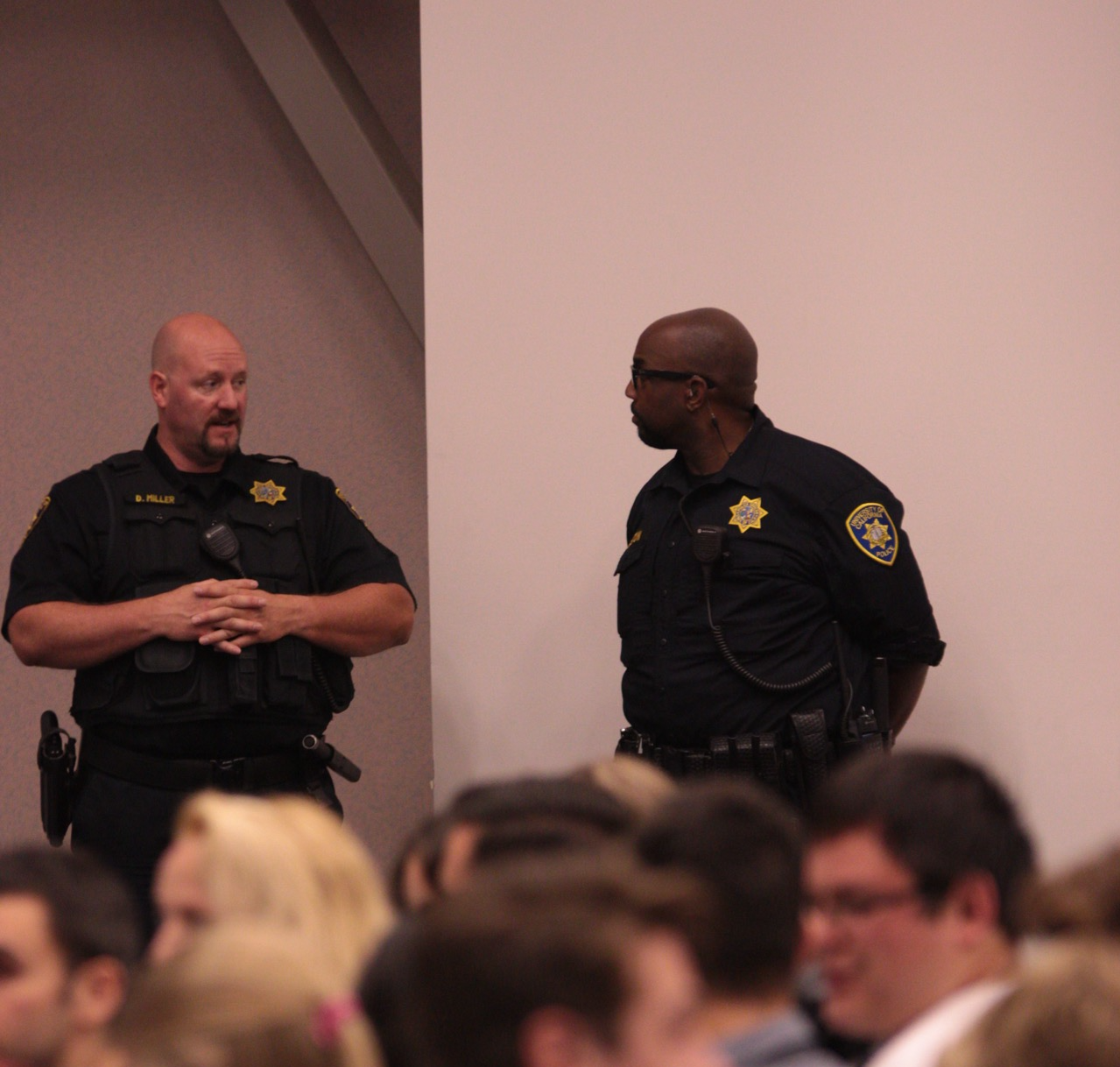 UC Santa Barbara Police are investigating an apparent threat of violence made Thursday night on Facebook targeting the “Feminism Is Cancer” event at Corwin Pavilion.

A user named Rick Chavez posted on the Facebook event page at 5:26 p.m., writing, “the course of action I take tonight will be in honor of elliot rodgers … i’m sorry mom i love you.”

Elliot Rodger was a Santa Barbara City College student who, in May 2014, killed six UCSB students in Isla Vista using a knife and several guns before ending his own life.

UCSB Police Chief Dustin Olson said during the event that the department was “looking into” the threat. Olson confirmed that the Facebook post is the only known threat directed at the event but said he could not gauge the credibility of the threat.

After the lecture, Katya Armistead, the dean of student life, said the campus is safe.

“I think the threat was to scare people because of the Milo event, but the event is over,” Armistead wrote in a text message.

Armistead said she spoke to university police at the end of the event and believes no one was detained. Andrea Estrada, a university spokesperson, later confirmed that no one had been detained.

“Feminism Is Cancer” is the name of a lecture by Breitbart journalist Milo Yiannopoulos, whom students have called a “provocateur.”

UCSB has a history with “provocateurs.” So follows a bit of UCSB history from an older (Class of 1978) alum who knows some of the details you youngers may not be aware of. In February [1970], the official student government invited defense attorney William Kunstler [left wing radical nutjob from NYC] to speak on campus, offering him $2,000 of student funds, plus a percentage of the gate, plus a passing of the hat. He appeared Wednesday afternoon, February 25, in the football stadium, where 7,000 people paid 50 cents each to hear him. The night after his speech the bank… Read more »

Thanks for the perspective Robert. As everyone was leaving the event I overheard conversations of people being elated they no longer have to hide their conservative views.

“Lockstep leftist conventional wisdom in academe” = unrealistic viewpoint of someone who fails to note that Edward Teller was a UC University Professor until his death, fails to note that Arthur Jensen (who studied the correlation of IQ with race) was a tenured and eminent social scientist at Berkeley, and fails to note that UC has administered the contracts for designing every nuclear weapon in the US Arsenal for over 70 years. If there is lockstep it is from conservative commentators who fail to note the real conservatives who have always been eminent in the UC systems. Shame on you… Read more »

IV, you really need to get out of the the bubble. Designing weapons of mass destruction is OK when a Democrat is in the Whitehouse, or didn’t you get the memo? You seem to forget the guy who asked for the bomb was FDR – a Democrat. And the uni employs Democrats out of all proportion to the population. Nice try but the plural of anecdote isn’t data. And, harassed or not is no excuse to commit arson is it? Not in my book.

Given the crap that went on (and continues to to this day) in IV in 1969 and 1970, arson wasn’t an in reasonable response-the wrong target was selected though. The cops ignored the violent crime (rape and armed robbery) and the hard drug dealers in IV and went after people smoking pot and drinking. IV property management companies were notorious for screwing tenants over. They should’ve been burnt to the ground. Don’t blame Kunstler for the three police riots known as IV 1, 2 and 3.

You’re in a bubble of bad information. Only 8.8% of science/engineering faculty are liberal, compared with >40% of Humanities/Social Science. You believe false anecdotes and ignore the data, which is that two major UC installations, LLNL and LASL greatly expanded under Eisenhower, Nixon, Reagan, and the Bushes. As for the IV incidents… deputies beating up students as they exited the Kunstler lecture, as well as David Minier and Barry Cappello (the DA and assistant DA) surrepticiously throwing rocks at deputies to incite violence, which they have admitted to in the LA Times, isn’t helpful either. No IV student was ever… Read more »

Robert, you’re a joke. I suggest you do a little research into what happened in IV in 1969 and 1970. It’s well documented by Carmine Lodise in his “A Citizen’s History of Isla Vista,” Malcolm Gault-Williams’ book, and a series of radio shows that KCSB did a few years ago. The trigger of IV 1 wasn’t Kunstler, but the cops arresting members of the Black Student Union on bogus charges right before the speech. There had been huge unrest over Black student issues at UCSB since 1968 that included building takeovers, marches on campus at both SBCC and UCSB, the… Read more »

No joke anonymous. Kunstler enabled the riot. A state facility was used (bad move admin.) to harang the crowd of 7000 the day of the arson. The. Day. Of. The. Fire. I know people attending UCSB at the time – who even got tear gassed. They explained the situation to me and I believe them. I got to watch Lodise attempt to launch a political career in SB for years and don’t trust him (I’ve been in the area since 1973). Fortunately he never got far (IV Parks as I recall). Stop making excuses for arson. If there was a… Read more »

Changing your tune I see Robert. From starting to enabling. That’s why I prefer my history well footnoted and documented, not based on tales told by folks who claim they were tear gased. I’m well aware of the “peace makers” in IV who tried working with the cops. They were regarded as well meaning at best and snitches at worse. They thought they could keep the cops out of IV by showing that students could take control of the situation. They weren’t able to and, in the opinion of some I know, made things worse. You might want to read… Read more »

Tune not changed in the slightest. I prefer unbiased sources not attempting to justify criminal acts. YMMV. Burning the bank was a) morally wrong b) counterproductive c) aimed at the wrong folks and d) criminal. You read your sources uncritically and in a moral vacuum. People here can tell the difference. Same old leftist indoctrination trick on your part. It takes air, fuel and spark to create a fire. If no fuel, as in no outside agitator to stir up hate (can you say community organizer [I knew you could]) no riot, no fire. Things were indeed bad, Kunstler made… Read more »

Hey Robert, take your “morals” and get lost. You and your ilk cheat, lie and steal while hiding behind your “family values” crap. I look forward to your kind dying off-it’ll improve the gene pool. Have a nice day asshole.

How many of them were racist Nazis?