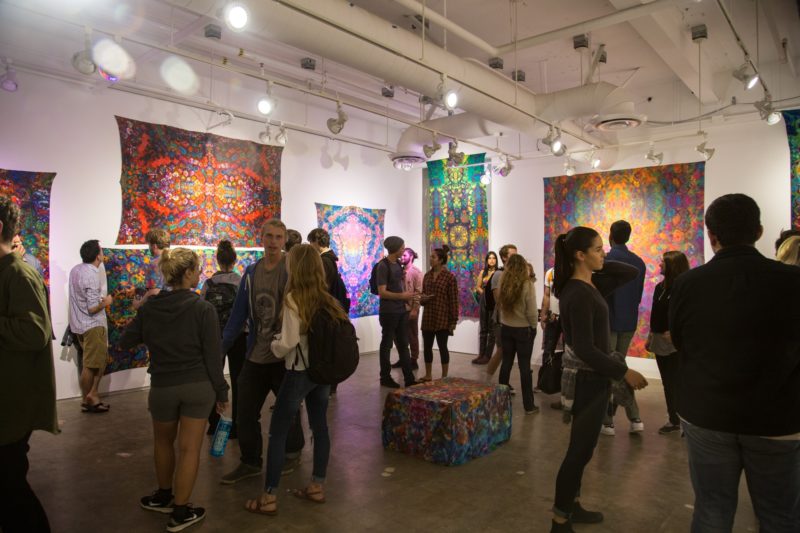 “Psychedelically touched,” responded second-year Liza Benabbas when asked how Synesthesia, a Tribe Ties art installation, impacted her. The Glass Box, a creative space where students can showcase their art to the public, was painted bright: intricate tie-dye tapestries layered the walls, each one unique in pattern, color and saturation. Thomas Kenney, a fourth-year biology major and head of the Tribe Ties gang, paced the room, examining the pieces on display and interacting with the attendees. He not only gave histories of the pieces, but engaged the crowd in conversation about how they felt about the art or their days in general. He had an enigmatic energy; his beautifully tie-dyed shirt combined with a peculiar charisma marked him as an artist. When Kenney spoke of his art he said with a large smile that tie-dye for him is “capturing a moment in my brain to give to you.” 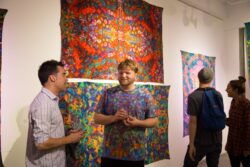 Looking at the pieces, one could imagine the creative turbulence in his mind and the minds of his compatriots, Jake Weeks, Kenny Oravetz and Will Shearer, all fourth-years. Some of the pieces looked like hallucinated Rorschach blots with thick drips of dye streaking across the once-white piece of cloth. One in particular looked like a psychedelic turtle. “There are different ways to tie-dye,” Kenney explained, pointing out the different symmetries of the various works. Some were bilateral, with two sides mirroring each other like a butterfly, and some were symmetrical quadrilaterally, where the sections showed themselves repeated four times in beautiful emulsions of color.

After speaking about the appearance of the art, Kenney transitioned to explaining the historical roots of his unique tie-dye style. “My dad used to tour around America,” he laughed, “and would pay for gas and food with his tie-dye shirts.” His father developed a really powerful, vibrant style of dying the clothing that ensures vibrancy and allows for complex styles. The technique used to create the pieces is tedious. Different from the standard procedure, this type of tie-dye is done with one continuous string similar to fishing wire. It takes up to 10 hours to entwine a piece of cloth before it’s ready to dye. The dyeing process itself uses a special type of dye specifically formulated to fix color to cloth ultra-brightly and permanently. One of the most important parts, Kenney added, is the waiting process. Twelve to 24 hours is ideal. Weeks and Shearer both expressed that the waiting period is one of the hardest parts. “Do you see that one right there?” Weeks whispered pointing to a very large, almost fading tapestry in the center of the wall. “We didn’t wait long enough.” Also, it’s important to note that different materials hold the dye better. The large tapestry that Jake pointed out was made of cotton, while Kenney’s super vibrant shirt was a polymer blend. 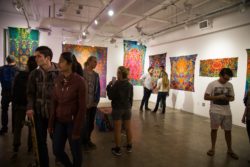 Daiana Medina, second-year global studies and English major responded, “Psychedelic,” when asked what the theme of the exhibit would be. The art was truly psychedelic. The collection was overwhelming and the colors spectacular. As the sunlight dipped over the horizon, Kenny, Shearer, Oravetz and Weeks, all wearing tie-dye, became hard to differentiate from the art, their figures brightening as the sky dimmed.