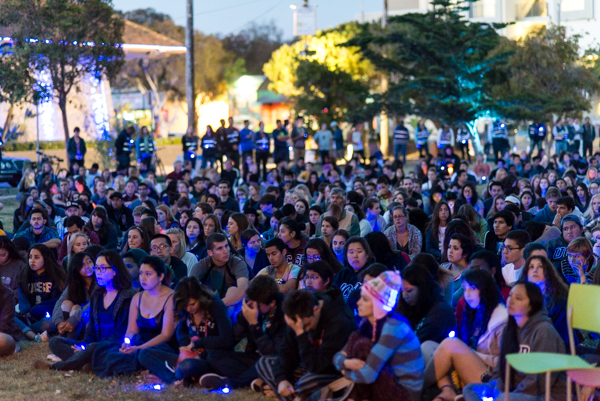 Students at a vigil in May 2015 remember the six UCSB students lost during the May 23, 2014 shootings. Daily Nexus file image.

My name is Kelly Wang, and my 19-year-old son, George Chen, was one of the six slain UCSB students in the Isla Vista mass murder that took place on May 23, 2014.  For me, it has been the most heart-breaking and devastating two years.

During countless nights of weeping, I wondered how the 22-year-old killer, Elliot Rodger, could be so merciless and so brutal. Would it be possible for someone close to him, his mother for example, to have been more alert and vigilant? Could she have taken away the guns and prevented this massacre from happening? With a mother’s instinct, I think the answer is possibly yes.

With information research, I learned that the killer had a long-term history of mental illness and socialization difficulty. In the last years of his life, he lived alone in an apartment in Isla Vista. He had no friends, but as a hobby, he collected multiple semi-automatic guns and hundreds of rounds of bullets. In the manifesto he sent out just minutes before he carried out the shooting spree, he described himself as an extremely devastated young man who longed to kill and to die.

Even though Mr. Rodger was a predator, I have deep sympathy for this severely mentally ill young man. If only he could have been helped sooner, the horrifying tragedy could possibly have been prevented.

So I plead with all parents, grandparents and family members:

We have seen a pattern in the most deadly campus mass murders, in which a heavily armed, mentally ill young man went on a shooting spree before taking his own life. To list a few:

In my opinion, there is absolutely no reason for a mentally ill person to possess deadly weapons as tools of entertainment, and gun safety should not be the concern of only politicians. They take years to come up with new policies, and that may not be quick enough to prevent the next shooting spree. On the other hand, parents and family members can be the first resource to keep the guns away from the wrong hands. They can do it TODAY and do it NOW.

Parents and family members can also take action more effectively than the legal systems because they know their loved ones better than anyone else. For example, a young man may hide his mental illness, his hatred and his extreme dangerousness from the outsiders, but if aware mothers act on their maternal instincts, some troubled individuals would receive help much sooner and the potential tragedies would be prevented. No mother wants her child to be harmed or killed, even if the individual might be a predator.

As a victim’s mother, I wish to raise the awareness of gun safety to keep guns away from the wrong hands. The wrong hands include but are not limited to a mentally impaired person, a very young child, an individual with extreme hatred or an emotionally disturbed and suicidal person. With the help of parents’ and family members’ vigilance, some tragedies might be prevented. If the awareness can save one life, we save his or her mother’s whole world.

I plead with you most sincerely to spread this message of awareness. Hopefully it can reach those who are most in need of hearing it.

I pray that no child will be the next victim of a mass shooting and no mother has to go through the heart-wrenching grief that I have been suffering. May God bless every mother and every mother’s child!

If you have ideas or comments, please leave me a message on “George Chen R.I.P.” facebook page, facebook.com/ripgeorgechen.