After firing Byron Scott and replacing him with Luke Walton, the Lakers at least solved their most apparent issue from this past season: coaching.

Scott’s hard-nosed style, eschewing offensive and defensive adjustments in favor of demands that his team “man-up,” showed just how out of touch he was with leading a roster primarily filled with inexperienced talent. 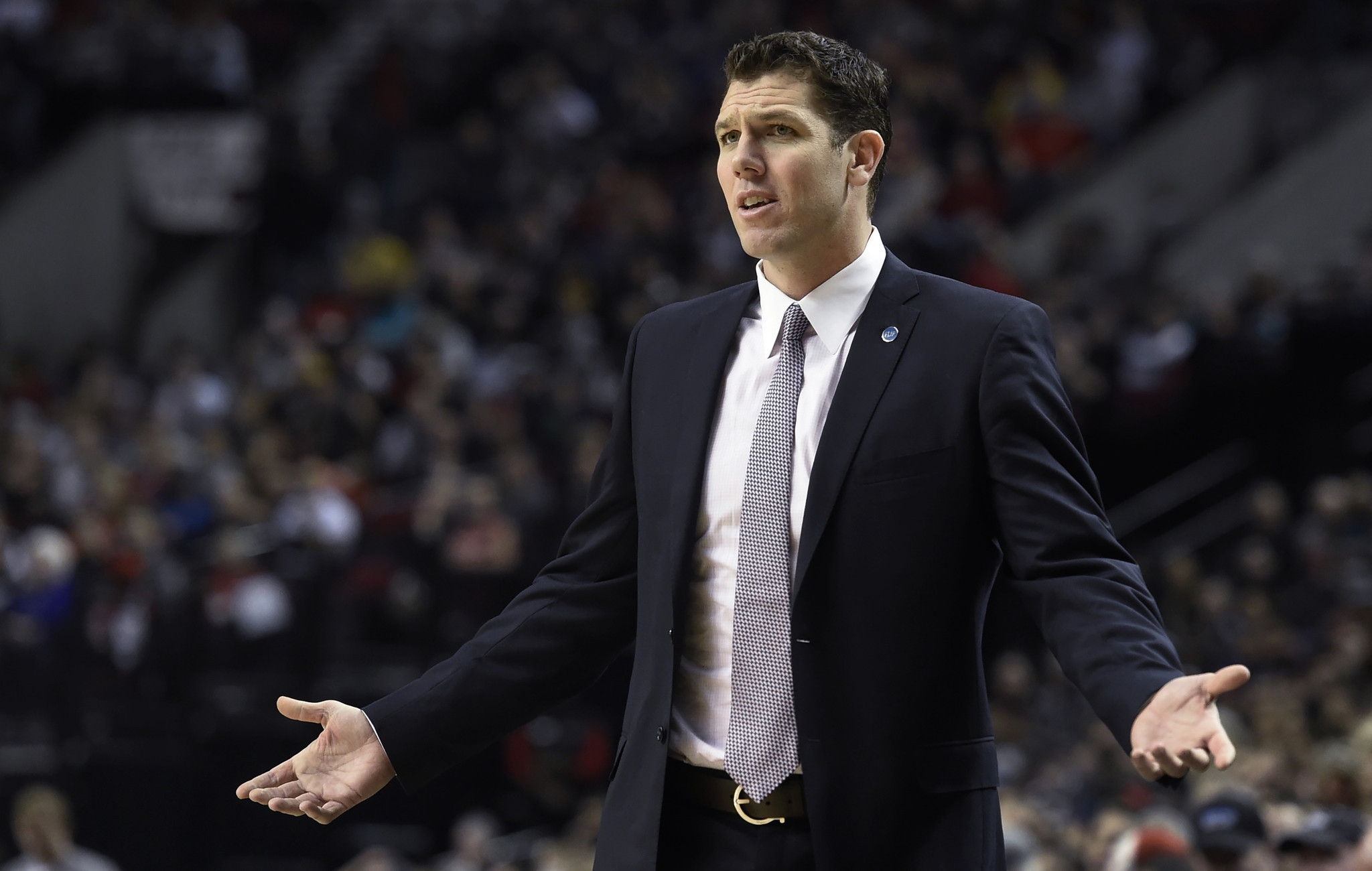 New head coach Luke Walton has big expectations to help bring the Lakers back to their winning ways. LATimes.com

Disregarding Mitch Kupchak’s incompetence in the preceding offseason, Scott’s only goal for this year should have been to develop his younger players’ talents and focus on expanding the skills that brought them to the NBA.

D’Angelo should have been probing the limits of his silky, off-the-dribble shot, but instead was relegated to the bench, scorned every time his shot selection got too aggressive for Scott’s ridiculous standards (because, yes, what we need is another 7-22 shooting line from Kobe Bryant).

Russell was drafted to have the ball in his hands constantly; a combo-guard who could both shoot and pass in the mold of James Harden. His floor instincts dazzled in one year at Ohio State, finding flashy, difficult passes that had observers, not entirely erroneously, comparing him to all-time great passer Magic Johnson.

Instead, he played alongside another ball dominant guard almost exclusively. In the 11 lineups Russell was a part of that got at least 30 minutes of run over the season, Bryant, Clarkson, Lou Williams or some combination of them were included in every one.

Granted, the Lakers personnel included far too many offense-only-ball-hogs, but the problem was compounded by the fact that Scott insisted on playing them together as much as possible.

According to Nylon Calculus’ usage and possession stats, each of those three players, as well as Russell himself, boast scoring usages (a measure that documents the percentage of plays used by a player to attempt a score, including both field goal and free throw attempts) over 20 percent, with Kobe’s breaching 30 percent.

His offensive philosophy obviously consisted of Bryant, Clarkson, Williams or Russell making something happen out of nothing, as set-plays and offensive movement were certainly not a Lakers staple this year.

This is why one needs more than high school drills in practice. Hustle is important, but hustle doesn’t account for the Lakers being completely outmatched from an Xs-and-Os standpoint every single night.

Byron’s complete dud of a career as the Lakers coach is now over — thankfully — and Walton’s willingness to try new, modern strategies coupled with his friendly personality will correct the Lakers’ biggest 2016 flaws.

Despite the poor coaching, there were plenty of solid developments for the Lakers this past season, starting with the progression of Clarkson.

While playing him and Russell together won’t work defensively for long stretches, the guard out of Missouri improved his three-point shooting, almost getting to 35 percent on an increase of over two shot attempts to get above four long-range attempts per game.

Clarkson’s assist numbers dropped despite his uptick in playing time, suggesting that he is far more suited for a reserve gunner type of role. He did start all 79 of his games, however, proving that he can play extended minutes at the NBA level.

Overall, Clarkson is a crafty player with the skills to take guys off the dribble, pull up and shoot accurately and carry the offensive burden on a quality second unit while playing spot minutes with Russell for offense-only units.

Randle showed some flashes, but he is heavily reliant on his left hand which could be improved given the fact that this season served as his rookie campaign after suffering a broken leg in his debut. 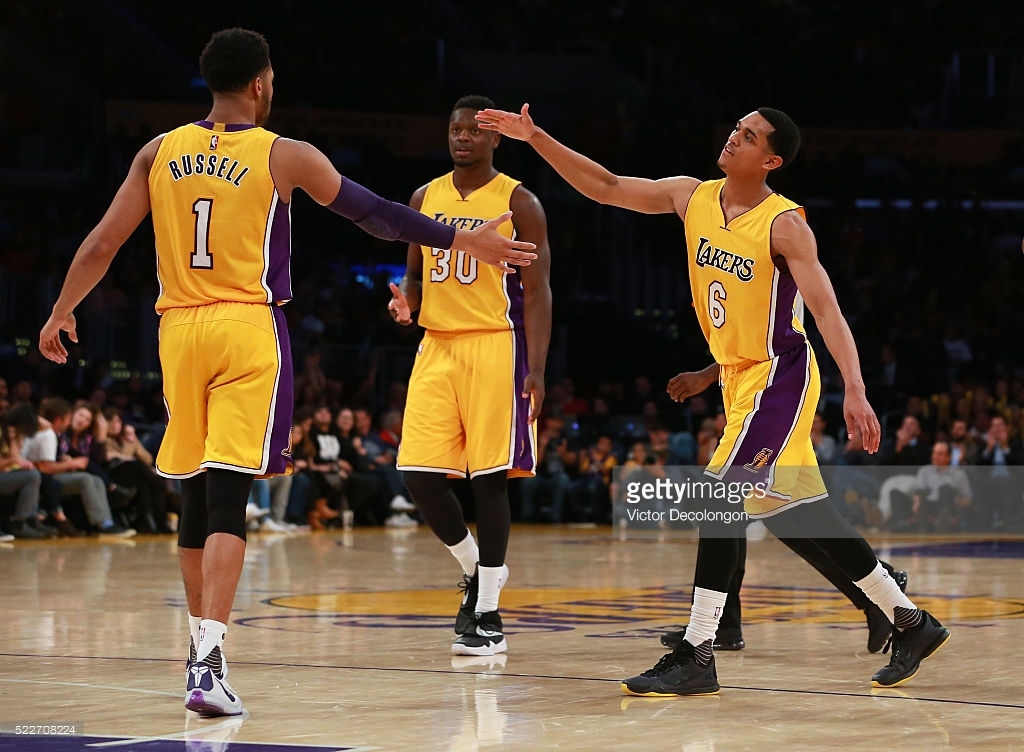 The Lakers’ new “Big Three,” Russell (left), Randle (center) and Clarkson (right), will try to bring the team back to relevancy. Getty Images

However, he seems like he may need to be paired with a center who can both shoot and defend the rim, a much desired but very rare unicorn in the modern NBA.

Larry Nance Jr. was a pleasant surprise for Lakers fans, as his defensive potential might make him a better fit as a starter in Los Angeles. Nance showed the quickness to defend rangier players on the perimeter, vital with so many stretch fours in the league now, as well as the length and strength to bang inside.

Apart from those four, the pickings were slim this year for the Lakers, who will bring back Williams and Young, misplaced shot-takers robbing Russell and Clarkson of valuable development time on the court. Kupchak should certainly look to trade both of them as soon as possible, provided they have any value around the league.

Even with those two, however, the Lakers will have over $65 million in cap space, an absolutely staggering figure.

Kevin Durant will obviously be the Lakers main target, with the ability to offer him the opportunity to play with any other max level free agent or a host of new and improved reserves.

Bringing in Nicolas Batum, for example, could be a perfect fit at the three with Durant at the four, or in a larger lineup with Russell at the point, Batum at shooting guard and Durant at small forward.

Walton could look to poach his guys from the Warriors, Harrison Barnes and Festus Ezeli, in what would be great additions despite the fact that the Lakers would probably have to overpay to avoid the Warriors matching the contracts.

Agile rim-protectors with more bounce than the stoic Hibbert should be a focus for the Lakers in free agency, with Bismack Biyombo and Ian Mahinmi being two solid candidates beyond Ezeli.

Trying to add several wing players such as Courtney Lee, Luol Deng or Jared Dudley would be a coup, though possibly the most intriguing fit would be Kent Bazemore. His skill to defend point guards could cover nicely for Russell, and Bazemore is a solid and improving three point shooter.

Scoring Bazemore, Batum and Durant seems too good to be true, but these are the Lakers and free agent splashes are their specialty.

Los Angeles will also look to add a major piece in the draft after securing the second pick in the draft this past Tuesday, or possibly move that pick for someone who could contribute positively next season.

Rumors of a trade for Boogie Cousins seem far-fetched even with the Lakers landing the No. 2 overall pick as a new, young talent could possibly be a better answer for the franchise as this point.

Brandon Ingram is probably the best current fit, as Ben Simmons would be the no brainer first choice to go No. 1 overall to the 76ers.

However, if Simmons were to fall to No. 2 the only problem with him is that he adds another ball dominant player to a team filled with them, though the Lakers are nowhere near being in a position to draft for need.

Even at No. 2 the Lakers still have the option of adding Jamal Murray or Buddy Hield as they are the best shooters this draft has to offer.

The Lakers have several positives looking forward to next season: Russell will have a summer to develop, with 80 games under his belt and a new and improved coaching staff.

With Durant assumed to have a finals-or-bust mentality, luring the superstar to LA. is a slightly more realistic fairy tale if the Thunder fall short this postseason. Nonetheless, a No. 2 pick in the draft is nothing to scoff at, especially with a rookie scale salary in the new cap environment.

Walton could be Alvin Gentry 2.0 in the sense that his debut season results in yet another poor performance on the court, as the Lakers do have a long way to go, but provided he can bring a few assistants with him from the Golden State staff, the Lakers will be a much more formidable force around the league in the 2016-17 season.

The Laker bench needs a complete over haul, Young, Williams, Sacre, Kelley and Bass need to go. Demar Derozen, Ed Davis, and a very good back up center( Fesitus Ezeli) would be an excellent beginning to put this team on the road to the playoffs and a championship. More can be added but these players know how to win.