The Daily Nexus
Student Gov
Bills Approved for Timely Bribery Investigation
May 19, 2016 at 12:10 am by Maura Fox

After allegations arose that the Inter-Fraternity Council (IFC) bribed students to vote, the UCSB Audit and Advisory Department has launched an investigation into the claims 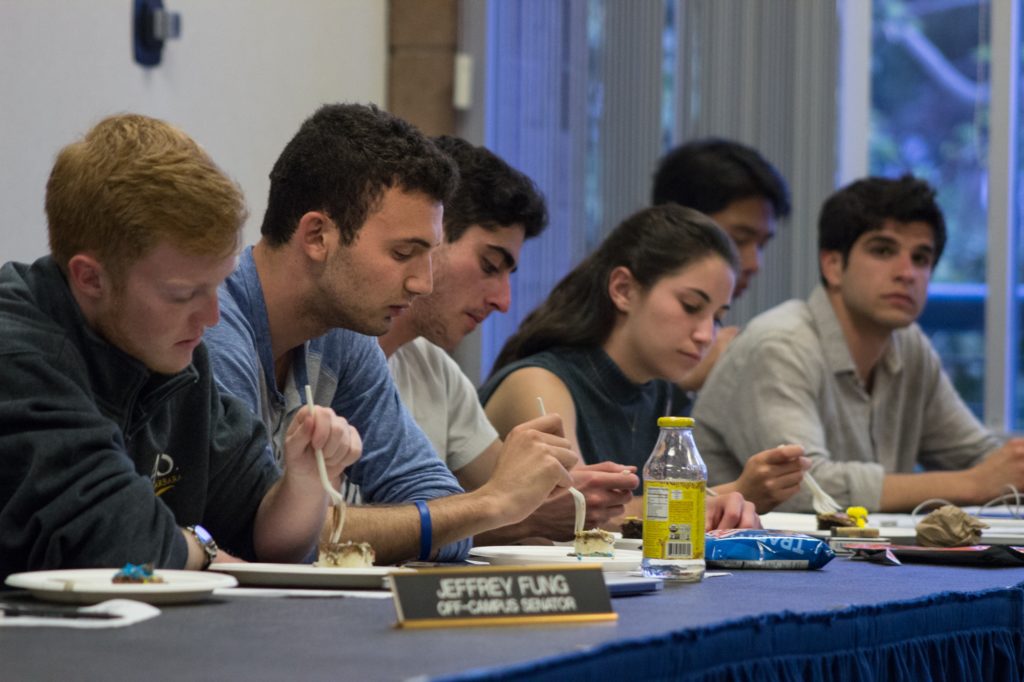 A resolution was passed to extend current Senators’ terms until Week Nine of the Spring Quarter should the report of the investigation be released close to the summer; the creation of an election commission was also approved. Jose Ochoa / Daily Nexus

The Associated Students (A.S.) Senate has approved two bills to ensure a timely investigation into bribery allegations made against the Inter-Fraternity Council (IFC) during the A.S. Spring Election.

The A.S. Elections Board called for a “re-vote” of the entire spring election ballot in April, alleging that the IFC “bribed” students to vote by awarding “philanthropy grants” to chapters with the highest voter turnout.

In an opinion piece published in the Nexus, IFC President Brendan Gonzalez said IFC consulted with the Office of Student Life prior to developing the grant program.

Since these claims were made, the UCSB Audit and Advisory Department has been leading an investigation into possible irregularities in the voting process.

The senate first approved a resolution to extend senators’ terms into Week Nine of Spring Quarter in case the investigatory report is released shortly before summer.

The senators-elect are usually sworn in during the week eight Senate meeting; however, according to current A.S President Jimmy Villarreal, this resolution will “push everything back” and give the current Senate more time to deliberate on the results if they should come in before the year ends.

Robert Tarsia, director of the Audit and Advisory Services, said the department hopes the investigation will be completed by the end of Spring Quarter.

“We’ve devoted resources to doing our best,” said Tarsia. “That always depends on the availability of the people we speak with, but we’re having pretty good success.”

Senate also approved the formation of the “Villarreal Election Commission,” named after President Villarreal. The commission will consider the final investigatory report if the investigation continues into summer.

Villarreal said he hopes to appoint 10 members to the commission, seven to vote and three to act as ex-officio members. These appointed commissioners will be chosen from the judicial, legislative and executive branches of A.S. and must be nonpartisan.

According to the proposals, there is “no known timeline” for investigating the bribery allegations against IFC, making the precautionary resolutions important in completing a full investigation.

“We don’t know when this investigation is going to end,” Villarreal said. “Whenever that investigation and report comes out … someone needs to receive it.”

Villarreal proposed both resolutions at last week’s Senate meeting and submitted a co-authored letter with President-elect Austin Hechler further detailing the resolutions and each of their commitments to A.S.

“We just don’t have any guarantee that anyone is going to be around to make those decisions,” Villarreal added.

“I’m going to try to find as many people who are as removed from this election as possible, whether that means they were helping out, they were endorsing [or] they were actively running,” Villarreal said.

While A.S. Attorney General Brandon Lee is also investigating the alleged bribery, Tarsia said the Audit and Advisory Department’s investigation is not connected to Lee’s.

“It’s pretty standard to make sure that you touch base with anyone else who’s doing a parallel investigation,” Tarsia said. “But we’re not in any way coordinating our efforts or sharing information.”

Villarreal will continue to release weekly updates on the investigation progress and conclusion.

A version of this story appeared on p.4 of the Thursday, May 19, 2016 print edition of the Daily Nexus.

Other Side of the Coin

I don’t understand what the investigation is. This seems like something that would be cleared up in a one hour session with UCSB Legal. “They offered philanthropic incentives to vote?” “Yes.” “And they didn’t tell people how to vote?” “Yes.” “Is it against the A.S. Legal code?” “No.” “Then what the hell are we doing here?” It seems like the investigation is more of a fishing expedition to see if anything beyond what has been stated happened… which isn’t usually how these things work. Extending the stay of last year’s senators during this time for a fishing expedition seems way… Read more »

I also am baffled by the IFC being the target of this investigation. The philanthropy grant program was approved by the OSL. So since the IFC had permission from the administration, how can the IFC be accused of impropriety? Isn’t the issue why one branch of the Office of Student Affairs approved the program and another branch saw it as possible bribery? Seems to be a huge failure to communicate within SA and AS. But the IFC should be absolved of wrongdoing. They did not violate any current rules. They sought and gained approval for the program from OSL. End… Read more »