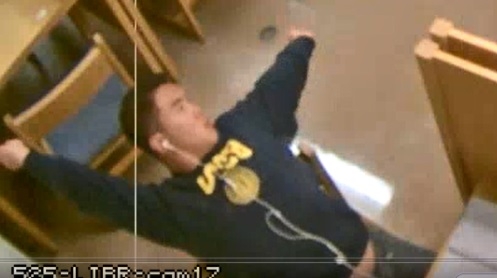 Screengrabs of library surveillance video show a man who UCPD says took pictures of a woman in the women’s bathroom.

The UC Santa Barbara Police Department (UCPD) on Wednesday released additional pictures of a man who they say entered a women’s bathroom in the library over the weekend and took pictures of a woman using the bathroom.

Sgt. Rob Romero said the suspect entered a women’s restroom on the seventh floor of the library Saturday night, exited and then went back in after a woman entered the bathroom sometime between 7 and 8 p.m. 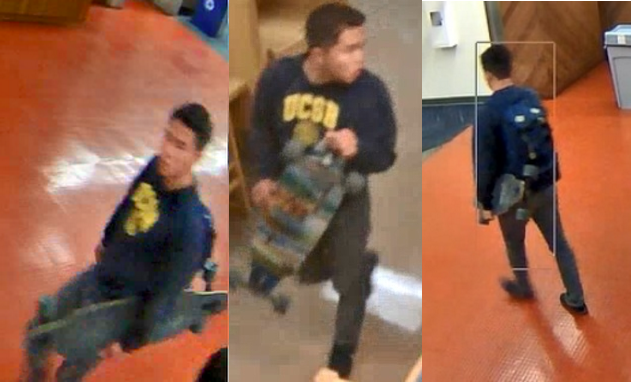 The suspect twice walked into the women’s bathroom on the seventh floor of the library, according to UCPD.

The man, described as a 5-foot-8-inch Asian male, was seen on video footage walking around the lobby area of the seventh floor before entering the women’s bathroom, according to Romero.

The woman reported to UCPD that the suspect put his cell phone under the bathroom stall door, possibly to take pictures of her.

The additional security camera images released by UCPD show the man sitting at a desk wearing a blue UCSB sweatshirt with yellow lettering and listening to headphones. The pictures also show the suspect holding a longboard and wearing a blue backpack.

The suspect was seen leaving the library going west toward Isla Vista, authorities said in an email to the campus community.

Anyone who knows the identity of the suspect or has any information is encouraged to contact Detective Ryan Hashimoto at 805-893-4558, at ryan.hashimoto@police.ucsb.edu or to make an anonymous report on the UCPD website.

Dayum… All of these morons from this new generation of petty criminals might just be literally fucking retarded. I mean, nobody in their RIGHT MIND would be doing stupid shit like this, right? I mean if you’re going to get arrested for something at least make it something worth it or at least something that’s just slick or badass so you could at least be doing it for something that’s actually worth it like money or criminal respect and notoriety. I of course am not doing this kind of shit anymore. I’m completely retired from the criminal line of work,… Read more »