The Daily Nexus
News
Students Claim Administration Has Not Fulfilled Sit-In Demands
May 16, 2016 at 8:00 am by Supriya Yelimeli 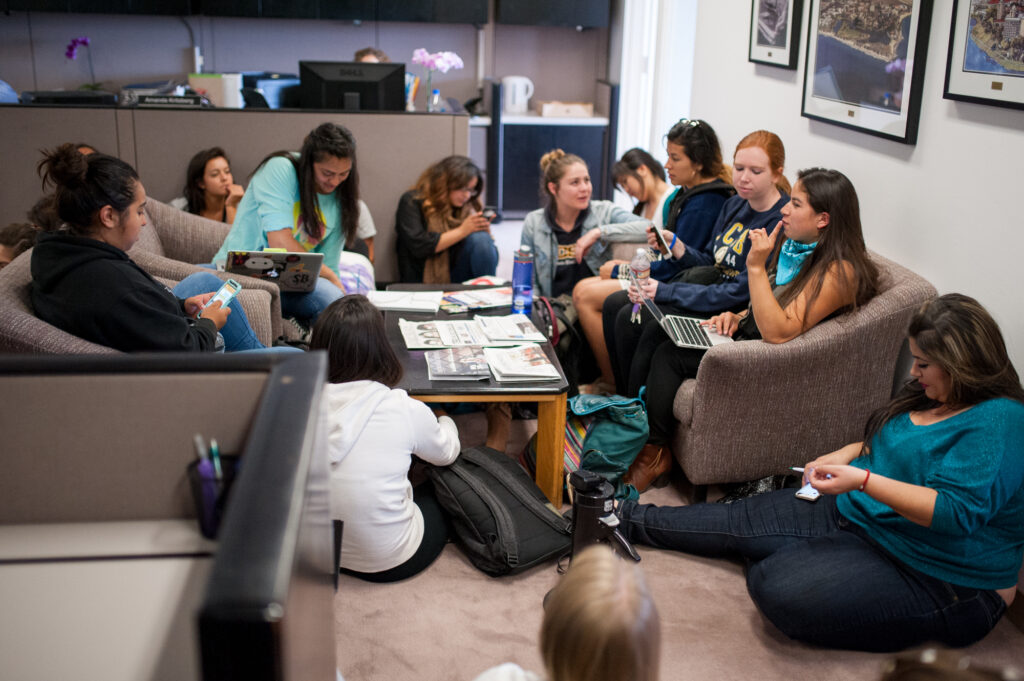 The student group #NowUCSB, formerly known as “It’s Not On Us, It’s On You,” organized a sit-in in May 2015 in Chancellor Yang’s office. They now claim the university has not adequately met their demands. Lorenzo Basilio / Daily Nexus

Students who sat in the chancellor’s office for 13 hours one year ago to reform sexual assault policy will rally Monday morning to ask that the university fully implement their demands.

The demonstration will be held in the Arbor at 10 a.m., and organizers expect a turnout of roughly 30 students. The event description asks attendees to wear black clothing and a teal bandanas in line with previous #NowUCSB events.

On the anniversary of the sit-in, #NowUCSB organizers say the campus continues to endure rape culture, harassment and violence and that the university “does not appear to take the demands as a priority,” according to a Facebook event description.

Students say the university has ignored the demands for a Campus Advocacy Resources & Education office in Santa Catalina and that perpetrators who are found guilty of sexual assault immediately be suspended and removed from university housing.

On May 11, UCSB Sexual Violence Prevention & Response published an update regarding #NowUCSB’s demands. According to the statement, the administration has succeeded in creating a university fund for survivors of sexual assault and the UC Office of the President has implemented minimum two-year suspensions for perpetrators of sexual assault.

Alejandra Melgoza, a third year Chican@ studies and history of public policy double major, was a leader during the sit-in and ran for Associated Students President during the 2016 election. Melgoza said students have viewed sexual assault reform through an “intersectional lens” to support diversity, but she wants to see the administration guide institutional change.

“As of January 2016, new policies have been set in place but the university has not put a strong effort in educating students about these new policies,” she said. “Instead, we have students teaching each other of how to navigate the system as a complainant or respondent. ”

On April 29, Sen. Hannah Beth Jackson (D-Santa Barbara) sent a letter to Yang volunteering herself as a resource and inquiring about the university’s progress in addressing the students’ demands.

“I understand establishing policy reforms is never easy and often quite challenging,” Jackson wrote. “Even more challenging is implementing them to create a culture shift in the way our young women and men are treated on campus.”

“The demonstration isn’t really about numbers to us,” said Lexi Weyrick, a sit-in leader and UCSB alumna, in an email. “This is more for ourselves and to show … we won’t be satisfied until every demand they agreed to last year is put into effect. That being said, we’d definitely love to see a lot of people come out.”

They’re protesting because they got what they wanted…alright then.

And not a single demand about protecting the due process rights of the accused, despite the multiple cases I’m aware of in which UCSB failed to do so.

Actually if there is a reference for those cases and how due process was ignored I’d love to read on that.

Many people have spoken to me under the condition of anonymity – but if you want, this would be a good place to start: http://www.thecollegefix.com/post/21934/

Warcry of the millennial. It’s probably good that they changed their name.

What the fuck kind of demands are those? Free tuition for the survivor? Covering their travel expenses? No way as a student would I want to cover those

Isn’t this a topic that’s being addressed in Campus Regulations committee? This is the biggest topic of discussion there. Some of the organizers of this are IN CR committee and should know that it’s being addressed…or rather SHOULD.
People have to understand that not everything is instant, you have to wait to get results, especially due to bureacracy and just the gradual dissemination of information.

That’s a pretty funny sit-in. A handful of people sitting around on their phones. Some protest.

They might as well go to class since they’d be doing the same thing there anyway. And, you know… accomplishing something. Haha just kidding, they’re all x-studies majors.