The Daily Nexus
News
Blue Lights in People’s Park To Mark Anniversary of Tragedy
May 14, 2016 at 4:23 pm by Nicholas Bogel-Burroughs 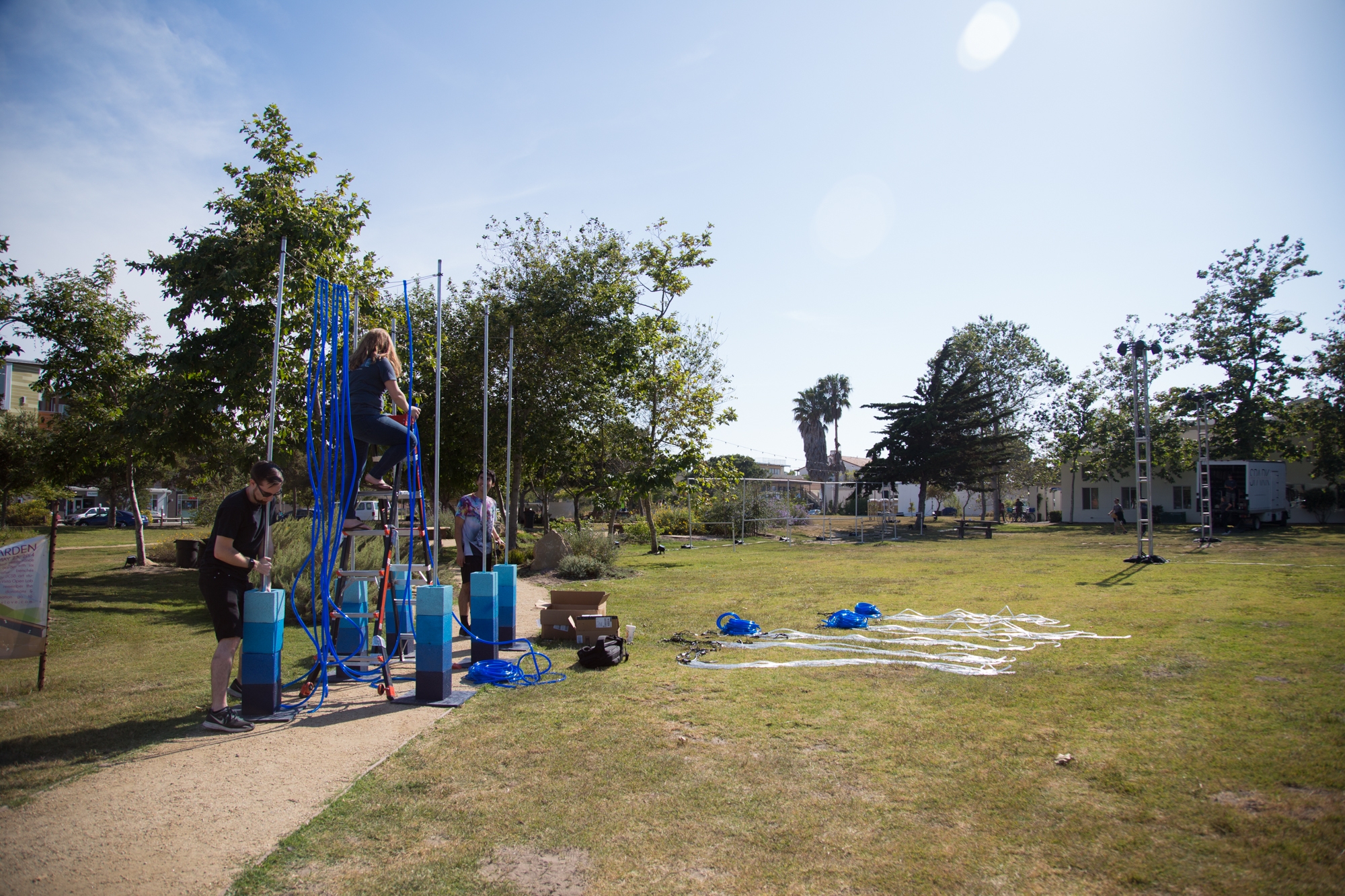 Organizers for Blunite set up stands to hold hundreds of blue lights meant to commemorate the lives of six students who died in the May 2014 shooting. Jenny Luo / Daily Nexus

People’s Park in Isla Vista will be glowing Saturday night as organizers for the Lite the Nite arts carnival have set up hundreds of blue lights to illuminate games, bouncy houses and DJs.

Nearly 700 people on Facebook say they are attending the event, presented by Blunite and UCSB Ambience, which is scheduled to run from 8 p.m. to 1 a.m.

The gathering and lights are meant to commemorate the deaths of six students in Isla Vista in May 2014 who were killed by a gunman who also took his own life. 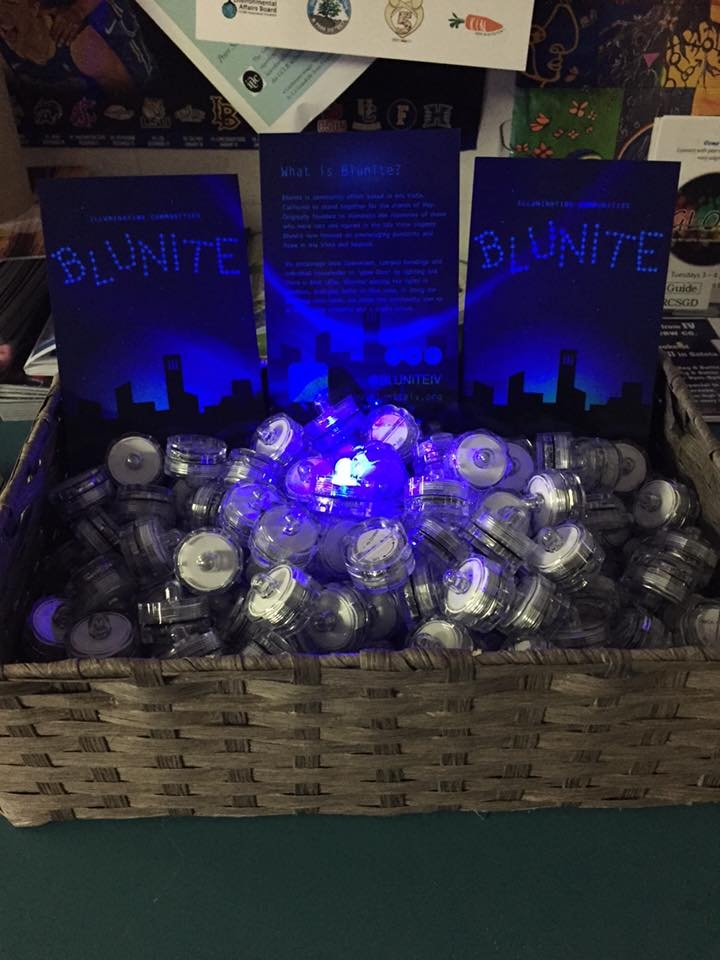 Organizers say that as students become farther removed from the tragedy, it is important to make sure the lives of the six victims are not forgotten. They say students will be able to celebrate the students’ lives rather than solely grieving their deaths.

“This year we just wanted to really again create the same feeling again of unity but also make sure it has a positive spin to it,” said fourth-year communication and art double major Raphaella Faria. “That’s how we decided to create a live carnival and integrate everyone, students, community members.”

Faria, who helped start Blunite in 2015 with a fellow student and art professor Kim Yasuda, hopes that students can enjoy the prizes, photo booth and crafts while understanding the deeper meaning of the lights.

“People can expect to have lots of fun, to see lots of lights,” Faria said. “We really wanted to focus on using the LED lights as our symbol.”

Several I.V. businesses have joined the cause as well, with Otaco, Hana Kitchen and Sorriso Italiano, among others, displaying blue lights. IV Drip created a Blunite cookie and Woodstock’s Pizza will be selling blue beer.

Faria, who was at UCSB at the time of the shooting, said students must remember that families in I.V. remain even while thousands of students leave each year. 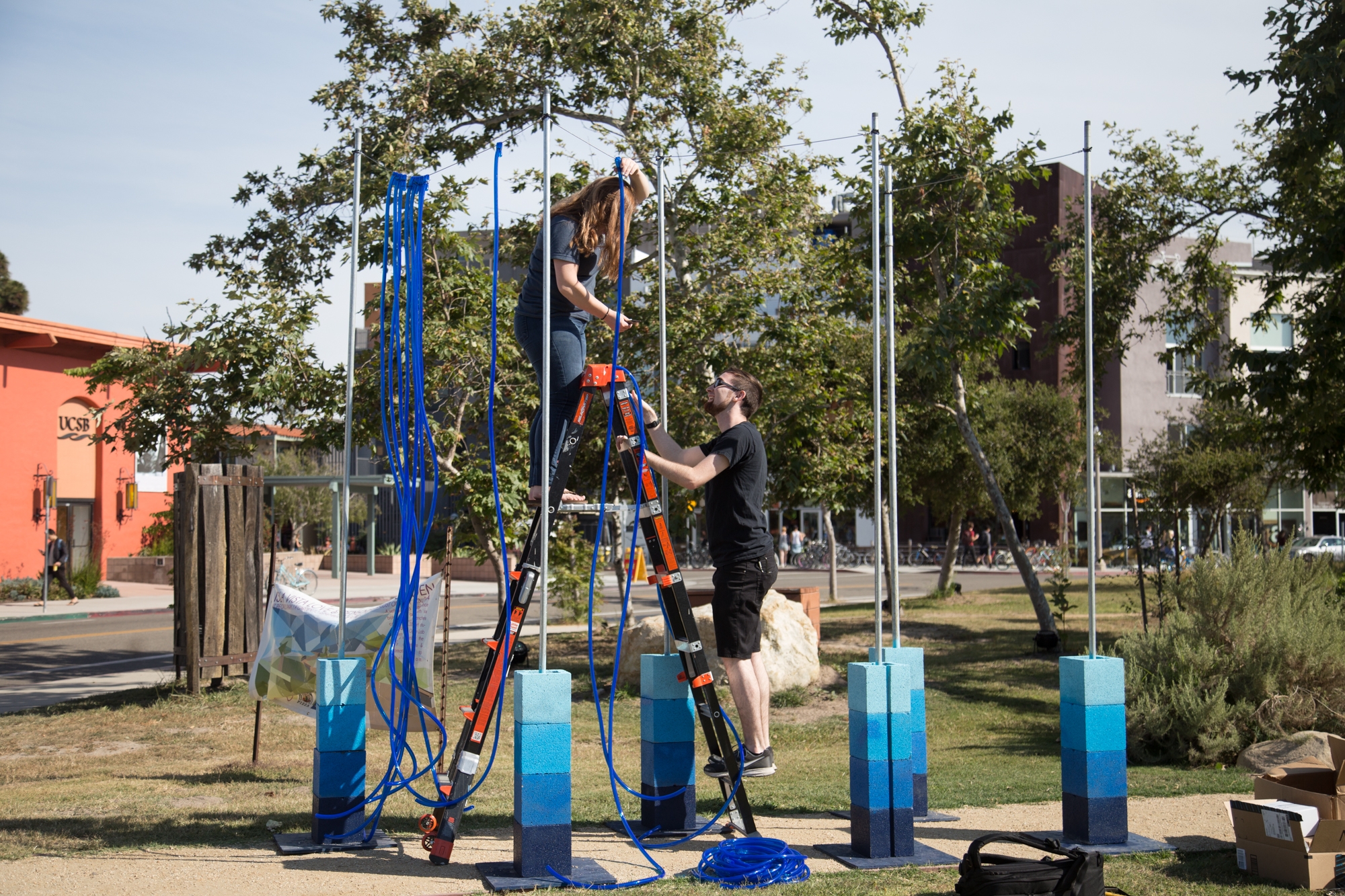 “The whole population changes in four years,” Faria said. “Every year there’s a group leaving and a group coming, but there’s still the families. We want to make sure that this is something that would be able to be commemorated and celebrated after all of the classes leave.”

Kou Collins, a transfer student, said seeing the community come together after the tragedy was a big reason why he chose to transfer to UCSB. Collins hopes Blunite can help bring students together who may not normally interact.

“It’s more than just the tragedy,” Collins said. “It’s more about uniting, and that’s what Blunite is about: the uniting, more than anything, of people who never come in contact with each other.”

Collins, who was breathing heavily Friday after carrying giant cinder block stands from UCSB’s Theatre Department to People’s Park, said it would be hard for students to miss the park on Saturday night.

“If you’re in IV, you’re going to know that there’s something going on,” he said.