We’re all at UCSB to succeed and do well. You certainly don’t need me to tell you that. As college students, there is a desire — with strength varying from person to person — to succeed. We achieve victories ranging from getting an A on a midterm to working our asses off at an internship in hopes that it will turn into a real job in the midst of an often unyielding job market. We work hard and we play just as hard; that’s our thing right? We study all night for a final and we start drinking as soon as it’s over because we’re in the clear for the foreseeable future.

Many of us will have a smoke break here and there to clear our heads and keep working immediately after until our brains stop comprehending and the sun comes up. Students will pop a few Addies each day during finals week and forget to eat more than a granola bar in the morning. I know these descriptions aren’t appropriate for every single student, but I can say with confidence that I have either performed one of these behaviors or watched several others around me do the same, beginning in freshman dorms and proliferating once living in I.V.

We do it in the name of success, in the name of, “This is fucking college and I don’t need to sleep. I need to do well so I can be a real, successful human being at the end of this.” College is a time of hard work and that’s not easily forgotten, but during this time of hard work our priorities need to be carefully considered before we start getting too attached to As and validation from TAs three years ahead of us in school; we grow less concerned with what the madness we put ourselves through might mean once we graduate. Our health — both physical and mental — may not come first 100 percent of the time, but when we trick ourselves into thinking we are growing and bettering ourselves whilst developing patterns of unhealthy behavior as coping mechanisms for our day to day rush, we are sacrificing our health for our perceived productivity.

Mental health is absolutely a prevalent issue facing college students; this is something we are told early and often and it is evidenced by the sheer number of essential resources we have for those having trouble. A study conducted in the Journal of American College Health of 13 different colleges found that 17.6 percent of those surveyed suffered from depression, generalized anxiety or a panic disorder, with 5.8 percent of those surveyed saying they had considered taking their own life. I am a believer that over-diagnosis exists, but underreporting and silent suffering counterbalance over-diagnosis more than we are able to understand.

The brilliance of success is worth grinding for, but not to the point that we neglect ourselves as human beings.

What are we struggling for? What are we working for? Idealistically, we are expanding our knowledge and growing as people while working toward a fulfilling career, but I’m not here to inspire freshman at orientation. Let’s be real: We will do an absurd amount of reading, note-taking and other forms of studying that will not serve us in any way whatsoever, let alone later on in life. We will stress and stress and give up sleep for an extra few pages and one more example problem. I’m not knocking students for working hard, but something I find myself forgetting while burning the 3 a.m. oil is my own well-being and what it means to my body and mind to strain myself over a screen for all those hours. If you feel the urge for a cigarette break or start questioning your entire life path over tomorrow’s assignment, what victories are you really ascribing worth to? The brilliance of success is worth grinding for, but not to the point that we neglect ourselves as human beings.

I have found that the norm in college is to live and sleep by the screen. When your social life and your next assignment are adjacent tabs on your toolbar, what choice do you have? We accomplish things through a series of clicks and scrolls, whether it is an assignment or creating an event page for a party. And for what? We get things done while sitting on our asses staring at a screen for hours. We’re moving forward, doing well and we haven’t moved since breakfast. It’s essential to step away from that screen and realize this perceived productivity might be dangerous to our actual health. Personally, I try to fight that sedentary lifestyle that has started to creep in every step of the way.

The drinking that permeates much of our college lives can also prove to be a slippery slope. We often drink to forget the subpar paper we wrote and drink to celebrate nailing that midterm. The sense of productivity we feel is often paired with the reactionary act of partying. Doing this in the name of either failing or succeeding really leaves no excuse not to party. I love partying — I really do — and I.V. is party heaven. That’s just a fact. Only recently did I stop and think about what is happening when — no matter what happens with us on campus, we either brace ourselves or welcome the result with open handles.

College is an age where we form habits that live on during our (hopefully) professional careers. In college, you might get home and join the party with your housemates or decide to go out because that paper is finally turned in and of course there’s somewhere you can go to release. Life after graduating likely won’t present us with the same options. It’ll be more like a choice between drinking alone or hitting the bar when we get home from a long day. 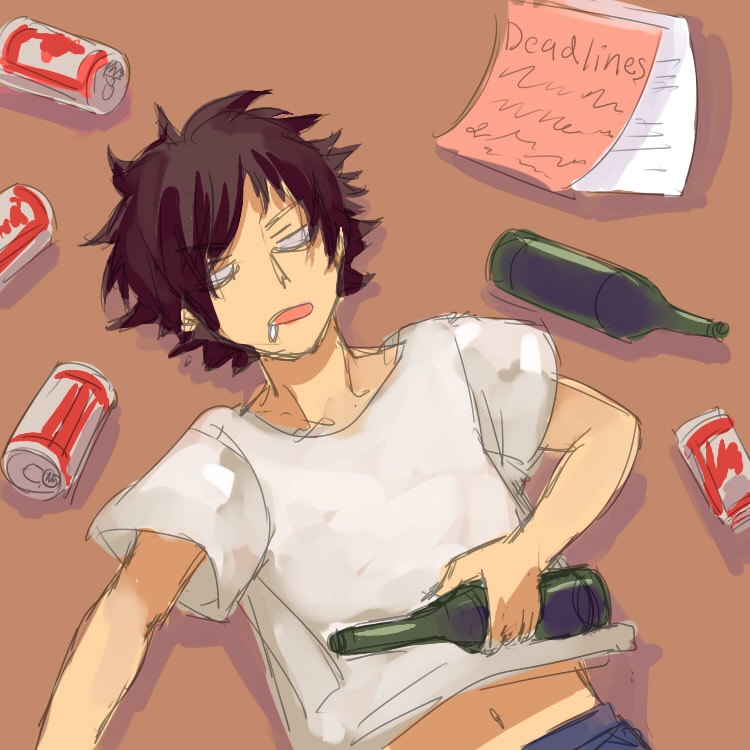 I’m aware that many feel it’s a foregone conclusion that our weekday shenanigans will be relegated to Fridays and Saturdays once we graduate, but old habits tend to die hard. When you’re reacting to tasks, victories and failures with the same behavior, it’s not as simple as distinguishing between Tuesday and Friday. By no means do I advocate for less partying. It isn’t a matter of frequency (OK, it might be a little bit about frequency).

What I am ultimately getting at is that partying should be done on your own terms. When you are matching getting things done with drinking, what are you really doing? What does your productivity mean? There’s nothing wrong with a little celebration, but when “Win or lose, I booze” stops being your IM softball team’s chant on Friday afternoons and becomes your whole life’s motto, major problems will ensue.

Being productive should not always mean sacrificing your well-being. Sleepless nights are more or less inevitable and hard work typically pays off. It’s the constant link between getting things done and not being as healthy as you should be that threatens the very worth of your productivity. It’s time to reconsider the definition of productivity and include ourselves in that definition.

Jackson Kerr advocates for a healthy balance of working hard and maintaining your own well-being.

Great article Jackson! It is definitely weird that “being productive” these days just means staring at your computer for hours on end