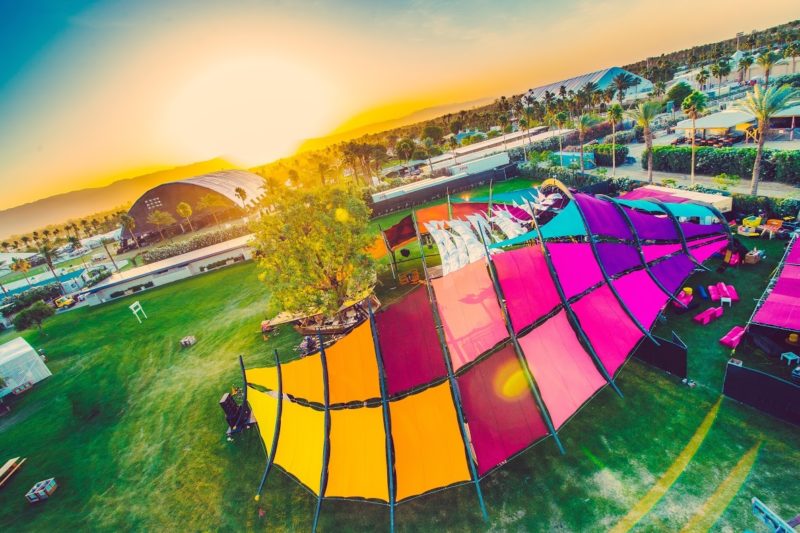 What can be said about Coachella, that festival among festivals, which brings scores of UCSB students carpooling into the desert every spring? Apparently a lot; the Nexus hit Coachella 2016, and here are some of Artsweek’s highlights.

LCD Soundsystem:
Excessively buzzed about once they announced that they’d be reuniting for a new album and tour in 2016 after their dramatically heartfelt and measured disbanding in 2011, LCD Soundsystem delivered one of the most polished and groovable sets of the weekends. Soundsystem proved apt nomenclature, as main stage became scaffolded with keyboards, drum machines, synths and people to produce the intricately layered and progressive anthems the band churns out. Frontman/visionary James Murphy and an arrangement of longtime compatriots like Nancy Whang and Pat Mahoney riffed seamlessly through their patented danceable tracks that make you think, like “Someone Great,” “Get Innocuous,” “Daft Punk is Playing at My House” and “Dance Yrself Clean.” They also paid tribute to some late greats, with covers of Prince’s “Controversy” and David Bowie’s “Heroes.” “I wasn’t a huge fan of them before going to the festival, but one of my friends convinced me to go. Their music was really powerful. Murphy’s voice was unbelievably good, and their performance definitely made me a huge fan of the band. The set pretty much defined all of Coachella for me,” said UCLA sophomore Andrew Gorin. Such a definitive performance makes the band a welcome addition back into today’s musical landscape; the promise of the buzz was well-kept.

Sheer Mag:
Sheer Mag lead singer Tina Halladay welcomed the band’s noontime audience at the Mojave tent with an admittedly reticent “Hi, we’re Sheer Mag,” before tearing into the mic with the opening track off of their most recent III EP, “Can’t Stop Fighting.” Halladay carried a quiet yet detectable charisma about her — tough to detect from her notable refrain of crowd interaction but undeniable when her high-pitched vocals ground into a screech — as she belted heartbreak ballads and grievances with the American political system. Even despite the limitations of the 30-minute set length, the low-billing, Philly-based garage band proved to be one of the most impressive sets of the weekend due to their unusual marriage of ‘70s revivalist singing, fuzzy instrumental overlay and genuinely fun high-fi guitar riffs.

Algiers:
Hot off of the release of their debut self-titled album, Algiers showcased both one of the most theatrically powerful and technically refined performances of the weekend in spite of their low-billing Saturday afternoon spot at the Mojave tent. Their sound sits somewhere in between post-punk and noise rock with a curveball peppering of gospel and blues. Lead vocalist and guitarist Franklin James Fisher would often spend the first minute of each song crouched on the stage looping cacophonic guitar riffs into a pedal, meticulously tinkering the distortion and then hastily tossing the guitar to the floor in favor of a tambourine and mic. Immediately following every other verse, Fisher collapsed at the knees into a position somewhere between a fetal curl and a prayer kneel, slamming the stage with the tambourine and a closed fist, the sweat on his back often glistening through his white-collared shirt. Songs were punctuated with late 20th century radio samples deploring institutionalized religion and served as the only nonmusical communication between band and audience. This was easily one of the most impressive sets of the weekend.

Courtney Barnett:
Courtney Barnett has been on the receiving end of quite a bit of accolade, with her debut album Sometimes I Sit and Think, and Sometimes I Just Sit making many 2015 year-end lists and earning her a Grammy nomination for Best New Artist. Her distinctive lyrical style always feels like aimless meandering through vividly mundane yet accessible scenes of poolside crushes as a conduit for profound thought exploration, while always remaining playful enough to land far away from any sense of pretention. During “Elevator Operator” and “Small Poppies,” Barnett was brought to her knees mid-guitar solo in an act of rocker-geist possession often caricatured in bad ’70s hair metal bands but perfected by the endearingly manic Jack Whites and Dan Auerbachs of the world. In between songs, she awkwardly chuckled and said things like “We like you guys,” or a simple “Thanks,” almost as if her manager told her she had to be nice to her fans. More likely, though, she’s just that lone person at the party exchanging clunky pleasantries, but is actually super sweet once you get to know her.

Anderson .Paak & The Free Nationals:
2016 is the year of .Paak. Born Brandon Paak Anderson, the R&B singer, songwriter, drummer, producer and rapper has largely slipped under the radar of hip hop fans for the majority of his professional music career. However, 2015 was exceptionally kind to .Paak, as Dr. Dre plucked the rapper out of obscurity to contribute to a whopping eight tracks on Dr. Dre’s latest release, Compton. .Paak’s January release, Malibu, has garnered him widespread media attention, citing his compositional complexity, strong lyrical content and energetic live performance. .Paak spent much of his Coachella performance bouncing between his mic and his drum kit with the only consistency throughout the performance confined to the intermittent declarations of his catch phrase, “Yes, Lord!” and his cheek-to-cheek, white-toothed grin. Both Dr. Dre and Kendrick Lamar came out in support of the budding star, a testament to both .Paak’s talent and his future enshrinement into the pantheon of West Coast musical legends.

Sufjan Stevens:
After touring with an intimate and human set to support his last effort, 2015’s quiet and folky Carrie & Lowell, fans didn’t know quite what to expect from the adeptly talented multi-instrumentalist in a 2016 festival setting. Flanked by a groovy Valkyrie duo of backup dancer-singers, a kinetic brass trio and eventually a cropping of inflatable air dancers, Stevens delivered an extravagantly theatrical act. There was banjo smashing, disco balling and costume changing (Suf wore erratic costumes ranging from a set of gigantic feathery wings, a get-up of dozens of swaying and bouncing mylar balloons, to a towering set piece resembling a crucifix-esque metallic jellyfish). He blasted through Age of Adz touchstones like “Too Much” and the 25-minute “Impossible Soul.” Even his C&L cuts were arranged up to match the energy, culminating with a performance of “Fourth of July” in which Stevens and his backup cried out emphatically the refrain that “We’re all gonna die.” “It was a big change from the last time I saw him, in a really good way,” fourth-year biopsych major Roni Brawley said, who also called his timely Gallant-accompanied cover of “Purple Rain,” “moving.”

Sia:
The enigmatic Australian songstress held down main stage Sunday night with one of the most bizarrely artistic and moving sets to grace the polo fields in, possibly ever. Obscured in the corner by her signature black-and-blonde wig and a dwarfing oversized white bow, Sia let her belting vocals and a slew of guests weave her story of pain, depression and triumph. The set bolstered hits like “Diamonds,” “Titanium” and “Chandelier” with performance art conducted by the eclectic likes of a tearful Kristin Wiig, a bewildered and accosted Paul Dano, frequent collaborator and dance prodigy Maddie Ziegler and more, all unified under matching checkerboard wigs to match the songstress’s striking aesthetic. The level of artistry presented by the set was unprecedented for the festival, especially when stacked against the droves of partiers shoving through the agape crowd to camp out for Calvin Harris’s following set.

Speaking of artistry, the visuals at this year’s fest were notably more subdued than the imaginatively photogenic fare of previous years. Poetic Kinetics, the design studio behind iconic works like the enormous and mobile snail, astronaut, and caterpillar/butterfly mascots were conspicuously absent this year, and the Do Lab stage, while still the center for free-for-all bone-vibrating bass and PLURality, re-used its Big Fish stage setup, which debuted last year. Rumors have abounded about the hefty sum Goldenvoice hoisted over to Guns N’ Roses for their headlining gig, siphoned off from supporting more visual artists. Whether these are founded or not, the money must’ve gone somewhere; in regard to the huge “Besame Mucho” piece backgrounding the polo field, senior Lauren Gutches scoffed astutely “Just because they’re in a different language doesn’t make giant words any more interesting as art.” Portals, a piece by Philip K. Smith, was a noticeable standout amidst the stagnance of the other works, reflecting and shifting subtly in light and color, as fourth-year Josh Swedelson noted, “like an Apple Store display crossed with the ‘Hotline Bling’ background.” As people posed for photos in front of the piece’s glowing rings, opening their own portals into their lives and themselves to become a part of the piece, the mirrored slats reflected outward onto the other-worldly festival outsides raging like the desert winds. Through music, art and, well, a lot of other things, Coachella offers portals into another universe for a weekend, one that it was a pleasure to get lost in.