The Daily Nexus
News
Street Names Lack Proper Spanish
May 5, 2016 at 2:43 am by Josh Ortiz 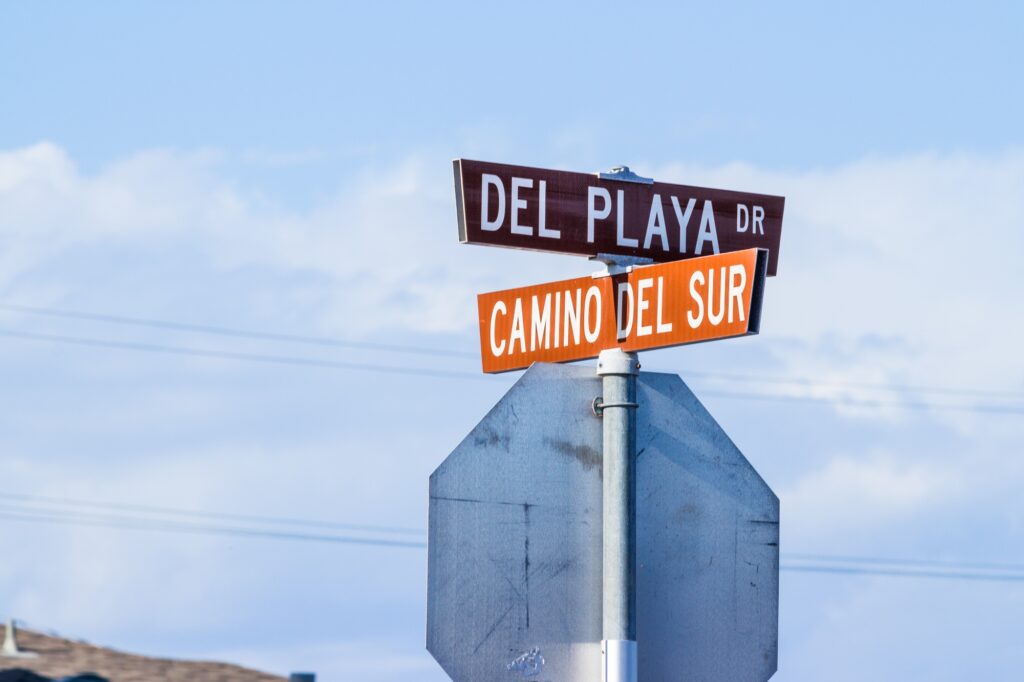 “Del Playa” seems to some a mistranslation of “to the beach,” which is “de la playa” in Spanish. McLane Brown / Daily Nexus

When Fernanda Cerrato, a second-year political science major, moved into her apartment on Cordoba Road in September 2015, she could not help but notice the seemingly incorrect Spanish in many of the surrounding street names—“Del Playa” appeared to her an incorrect version of “de la playa,” which means “to the beach” in Spanish.

Cerrato was born in Sonora, Mexico, and moved to a Mexican-American neighborhood of Oxnard, Calif. at 14. She now notices when people pronounce “El Colegio” with a hard “g” instead of the “h” sound used by native Spanish-speakers.

Bad Spanish seems to be abundant in Isla Vista’s street names, and historians say that these mistranslated titles are the work of I.V.’s earliest developers.

The Spanish street names and “Isla Vista” were intended to keep with the Spanish colonial theme then in use by much of Santa Barbara as it rebuilt itself following the 1925 earthquake.

Several I.V. historians agree that the Ilharreguys were probably not good at Spanish.

“Isla Vista” is Spanish for Island View, but is not grammatically correct, and “Sabado Tarde” was supposed to mean “Saturday afternoon,” but Spanish-speakers typically say “Sabado por la tarde.”

Historians also find “Pasado” to be an odd choice. Had the Ilharreguys chosen “Pasada,” the name would have meant “passage,” but the “o” at the end changed the meaning to “overripe” or “spoiled.”

Regardless of whether Santa Barbara County officials noticed the Spanish mistranslations, the Board of Supervisors approved and accepted the names of Isla Vista’s streets in November 1925.

Three months later, attorneys Alfred W. Robertson and James R. Thompson built three long roads adjacent to the bluffs, two of which joined in a loop on the east side of Isla Vista. They named these streets “Embarcadero Del Mar” and “Embarcadero Del Norte,” meaning “Ocean Wharf” and “North Wharf.”

The attorneys set aside the inside of the loop for an athletic park, and they extended the four parallel roads built by the Ilharreguys. Most of the streets on the east end of I.V. kept their original names, except Pasado Road, which was renamed “Sevilla” and later became Seville Road.

Harriet and Brenda Moody, the daughters of building contractor Elmer Moody, developed a tract of land from the Ilharreguy property to Coal Oil Point, submitting a map to the county in April 1926.

Despite much of the planning that took place in the 1920s between these various landowners, much of Isla Vista looked as though it had never been developed by the early 1940s.

Historian Jennifer Hildreth Strand noted in her 1987 master’s thesis at UC Santa Barbara that Isla Vista was covered with bean fields, a place where “goats wandered” and “roosters crowed.”

The streets that are now Abrego Road and Sueno Road appeared unnamed in a 1944 map of Isla Vista, when a U.S. Marine Corps base was located in place of UCSB.

After the establishment of the university, developers began consulting many of the plans laid out by the Ilharreguys, Robertson and Thompson and the Moody sisters in the 1920s.

The county formed an Assessment District in 1960 to pave and construct much of these roads. By 1968, a map of Isla Vista indicated the newly added Camino Majorca, Fortuna Road, Fortuna Lane and Estero Road. Abrego Road and Sueno Road appeared as named streets on this map.

Sueno Road seems to have referred to “dream” in Spanish, but the current spelling omits the “ñ” used in Spanish.

Cerrato said it does not surprise her at all that historic developers named many of Isla Vista’s streets with little knowledge of the Spanish language.

“This is a white community, so this is expected,” Cerrato said.

A version of this story appeared on p. 1 of the Thursday, May 5, 2016 print edition of the Daily Nexus.

– “This is a white community, so this is expected,” Cerrato said. –
What a racist thing to say! This issue has absolutely nothing to do with race, or ‘White People’! Spain, where Real Spanish is spoken, is a country of people who would be considered – by most – as white.
Many names are mis-pronounced around here, not the least being; ‘Isla Vista’ which is not ‘I – LA’. Nor is the street in Santa Barbara: Islay (an island off the west coast of Scotland) properly pronounced ISS-LAY.

^Calls out perceived racism against white people, implies something racist about non-white people. Come on, if we’re being honest about the majority of white people in this country, most don’t know how to speak a modicum of proper Spanish. Among native Spanish speakers it probably is expected, I don’t really see how that’s unreasonable or remotely racist.

The point is that it is totally unnecessary to bring race into this.

This is old news…

yo…why is this even a story in the DN?? must be a slow week…I’m was born and raised in Cali, visited Mexico every summer, get over it…there are many spanish words spoken/written incorrectly in Mexico as well, ask a Spaniard…the only thing i found interesting was the ignorant/racist remark made at the end of the article….get over it! language changes over the course of time as it spreads throughout different cultures with their native languages….i.e. Spanglish (as spoken in East Los)….no mames Fernanda!

The streets were named in the 20s, correct? Before schools were integrated and taught other languages? I just think it’s interesting. Language is mutable and that’s the beautiful thing about it. I think the Spanglish versions of our streets are actually funny. Sure, they aren’t accurate, but they are a mix of mistranslations, which are the result of the native language influencing the original culture. I think the fact that people even tried is admirable. Why not make it all english? And the “white community” comment is the only thing I disagree with. The culture of Isla Vista and of… Read more »

If anyone would like to read more about IV’s early years, a PDF of Jennifer Hildreth Strand’s great thesis is available online here with a lot more detail: https://web.archive.org/web/20150518153524/http://westcampuspoint.net/natureLinks/Strand1987IslaVistaMaThesisHarrisBrownleeCohenOcr.pdf

Pasado can just mean “past,” which isn’t as unlikely of an intended meaning as “spoiled.” Even still, “El Pasado” would make more sense.

Go back to Mexico