The Daily Nexus
Sports
Batter Up! Clark Swings Her Way to Success
May 5, 2016 at 5:03 am by Antonia Bird

Although only a junior, outfielder Kristen Clark is on the path to leave one of the more everlasting legacies in UCSB softball history.

This legacy stems back to Clark’s first year as a Gaucho, when she delivered one of the most praised performances as a freshman in program history. 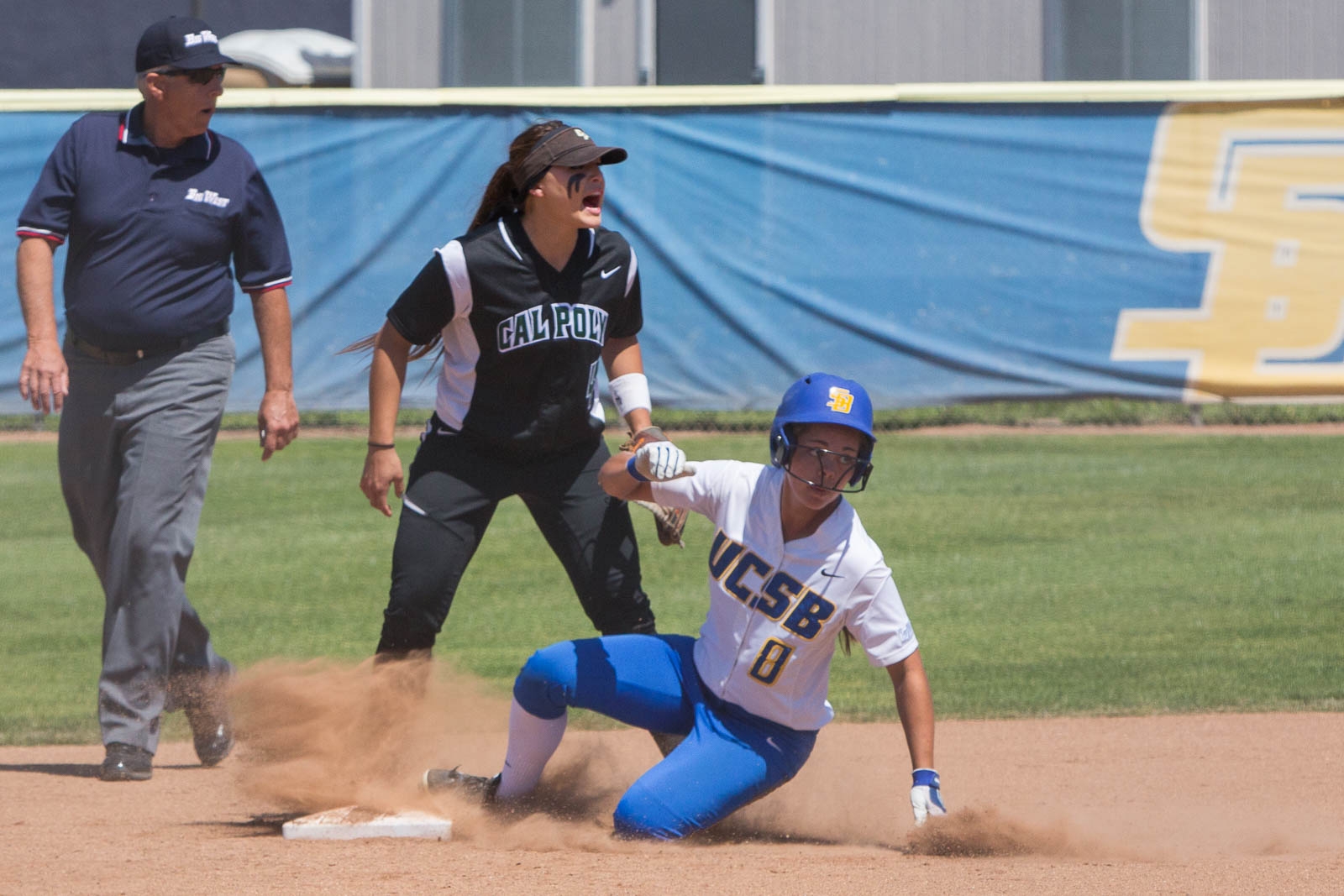 In just her first season, the young Clark performed at a veteran level, setting the single season school records in hits with 90 and batting average with an unbelievable .437 clip.

Nonetheless, her success as a freshman doesn’t end there. Clark ended the 2014 season leading in almost every offensive category, finishing with 25 stolen bases, four triples and a .505 slugging percentage. These incredible numbers would earn her Big West Freshman of the Year, First Team-All Big West and Honorable Mention All-Pacific Region.

Clark began playing softball at the early age of six when her parents signed her up for tee-ball. Her interest in softball was sparked through her older sister, whom she watched play for a year before deciding to pick up the bat herself.

While Clark’s older sister provided an inspiration for her growing up, she also admired watching pro baseball players, as baseball is one of her favorite sports to watch. There is one player in particular however, who really stands out to Clark.

“I really admire Adrian Beltre. I grew up as a Dodgers fan back when he was playing for the Dodgers, and I liked the way he would just take a hack,” Clark said.

Taking a hack would be the motto for Clark as she improved her batting average from a .407 to .438 percentage by the end of her high school career at Monte Vista High School. Before attending Monte Vista High, Clark attended The Woodlands High in Woodlands, Texas where she would have a freshman season much like the one that she would experience later at UCSB.

While only a freshman in high school, Clark led her team to a district title and was named the district’s Freshman of the Year. She also earned herself a spot on the district’s all-first team and all-academic team. 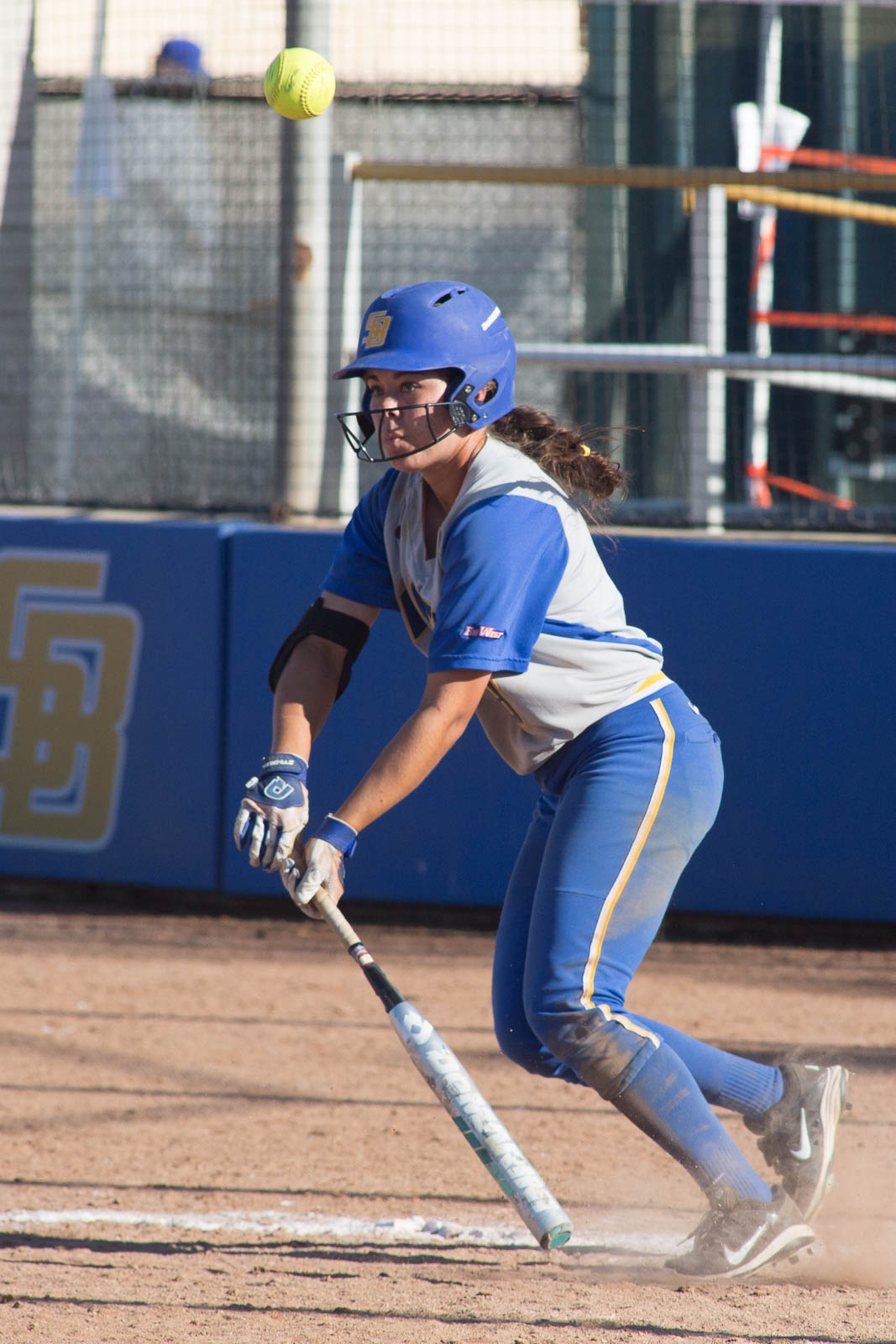 After bunting the ball, Kristen Clark prepares to run to first base. Dustin Harris / Daily Nexus

Although softball plays a huge part in Clark’s life, academics have always been a priority. Clark was an honor roll student during all four years of high school, while also being a member of the National Honors Society, the California Scholarship Federation and the French Honors Society. Fortunately, Clark ended up at UCSB.

“There were a lot of factors that made me choose UC Santa Barbara. Academics was a big thing as well as the athletics part, because I’m a biology major and they obviously have a great program here,” Clark said. “There was a time when I wanted to stop by the campus and look at it, and I got a gut feeling like, ‘wow, I can see myself being here for four years,’ because it’s gorgeous, and I really liked all the coaches in the program.”

Since making the decision to attend UCSB, Clark has experienced nothing but success on the softball field. In her sophomore year during the 2015 season, Clark was named Second Team All-Big West, tallying the third-most hits in Gaucho history and leading the team with 69.

Clark also finished the season with a team high nine stolen bases. Throughout conference play, Clark improved her batting average from a .356 to .382 which ranked her sixth in the league.

Clark’s ability and determination to improve, whether it’s small or large improvements, is at the precipice of her game. Since the beginning of her high school career, Clark has managed to better her softball abilities and improve her game.

“I’ve always been more of a get on base type of batter,” Clark explained. “And so this past year I’ve really tried to get a bit more power. Against Riverside I hit an over the fence home run so that was a big step for my hitting and offense.”

Setting such high goals for herself has developed Clark into one of the team’s strongest and most powerful hitters. This year Clark has continued to dominate most offensive categories, leading the team with a .420 batting average, ranking her third in the conference, and an excellent .480 on base percentage.

She also leads the Gauchos with 37 runs scored this season, and 17 stolen bases, ranking her seventh in conference standings. Since the beginning of Clark’s softball career at UCSB, Clark has inspired her teammates with not only her numbers at the plate, but her drive and determination to succeed both on and off the field. As a junior, she will have huge expectations put on her by the team for her next year.  There is little doubt that Kristen Clark will be ready to meet the challenge.

A version of this article appeared on page 10 of May 5, 2016’s print edition of the Daily Nexus.