The Daily Nexus
Spoken Word and Poetry
Khalil Almustafa Uses his Noodle, his Words
May 2, 2016 at 7:17 pm by Maximilian Ochoa 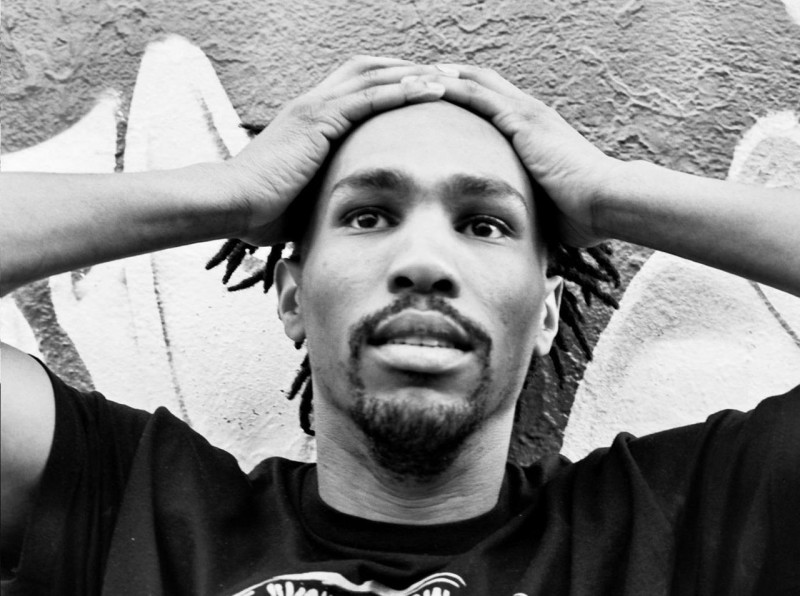 The night moved quickly as the warm air rippled through the small trees. Looking into the various wineries, breweries and art studios, the happy people inside added another layer of comfort to the mild Thursday night. Rebar Coffee is a little spot just on the precipice of the Funk. Inside this coffee shop, Kahlil Almustafa was expected to perform some of his spoken word pieces. Upon arriving, a woman moved up to greet us; “Are you here for Kahlil?” she asked. “He’s going to be performing just through that door there.”

The noodle bar just adjacent to Rebar — where Kahlil was actually performing — was dim, yet somehow filled with light. The crowd was large, the room hot and the conversation steady and expectant. The stage was set just beyond the large table ensconced in the middle of the hall-like restaurant. Lights painted the far wall of Yankee Noodle house in a phosphorescent display of red, blue and green, in stark contrast to the rest of the noodle bar. Seats were hard to find, and the ones left unfilled were ill-placed just behind the stage. Looking around for Almustafa yielded no results. The mass of bodies occluded him, their noise obscured his.

Around 7:45, a general hush came over the audience as the first performer, first-year black studies major Ryan Lawrence, came up on stage. He introduced himself quickly, his voice slightly unsure. He delved right in, giving a performance on death in the black community, on how scarring it is to grow up black in white America. When asked of the title of his poem, he called it “a work in progress,” but that if he had to give it a name he’d call it, “Black People Don’t Say the Word Die.” The next performer, Mari Lou, originally from Long Beach and a fourth-year at UCSB, came on next. Her piece, “On Reclamation,” focused on her experience as a survivor of sexual assault and the reoccurring trauma and shame attached to being a survivor. Her voice was steady and her stance wide; when she finished her piece, resounding applause for both the performers lifted through the audience, filling the hall.

Then it was time for Almustafa. He assumed the role of poet and gave a brief history. Growing up poor in Queens deeply impacted his art, he revealed, and was the impetus for his career focused on educating youth. The transition between history and spoken word was so smooth that it took a second to realize it, his words melding into art so seamlessly. His style was eclectic, incorporating rap and singing into his pieces, which were focused on the reality of being black in America.

Dominic Kirby, a second-year computer science major, commented, “The fact that he [employed] rap was impressive.” In one of his pieces, “Postcard for Amadou,” he covered the topic of lynching, noting that it was never a private, but a “community event.” The audience was deeply affected. “I like the look on people’s faces,” second-year art major Cécile Le Duff told me over noodles. People were entranced; Almustafa’s was the only voice heard. His piece, “This Is How To Speak America,” expressed that through defamation, genocide is made permissible. One of his most impactful pieces told a story of his mother, debilitated by A.I.D.S. In it he revealed that the disease acted like a membrane between her and her family “because,” he said, “they didn’t know if she was contagious.” Eye contact, he maintained, was rare between him and his mother, and when it did happen, “It was a scream for help.” He ended his performance a few pieces later to booming applause, the mood of the room flipping from receptive and mournful to congratulatory. When asked of the impact of Almustafa’s message, Alex Villegas, fourth-year sociology major, said, “The passion through his work really vibrated through what he said.”

After the performance, Almustafa was surrounded by fans and friends. When asked, “Would you consider yourself a poet or educator first?” he responded, “It’s one life practice,” meaning that he educates through art. To aspiring poets, he advised, “Read a lot of poetry. Pull poetry from the common tongue. Poetry is found in the common language of the people.” The performance passed, the crowd dwindled, but Almustafa remained, fielding question and talking with friends, his face warm and engaging.

I first heard Kahlil at Vermont College where he gave a powerful performance. Among other things, he eloquently addressed men\’s violence and its awful impact particularly on black men, and on the women he loves. His voice should be heard much more widely.