The Daily Nexus
Sports
UCSB Hosts Hawaii for a Chance at History
April 29, 2016 at 5:00 am by Jorge Mercado

The No. 20 UCSB baseball team will look to continue the passion it displayed after Tuesday’s emotional extra inning win when it takes on conference opponent Hawaii this weekend for a three game series. 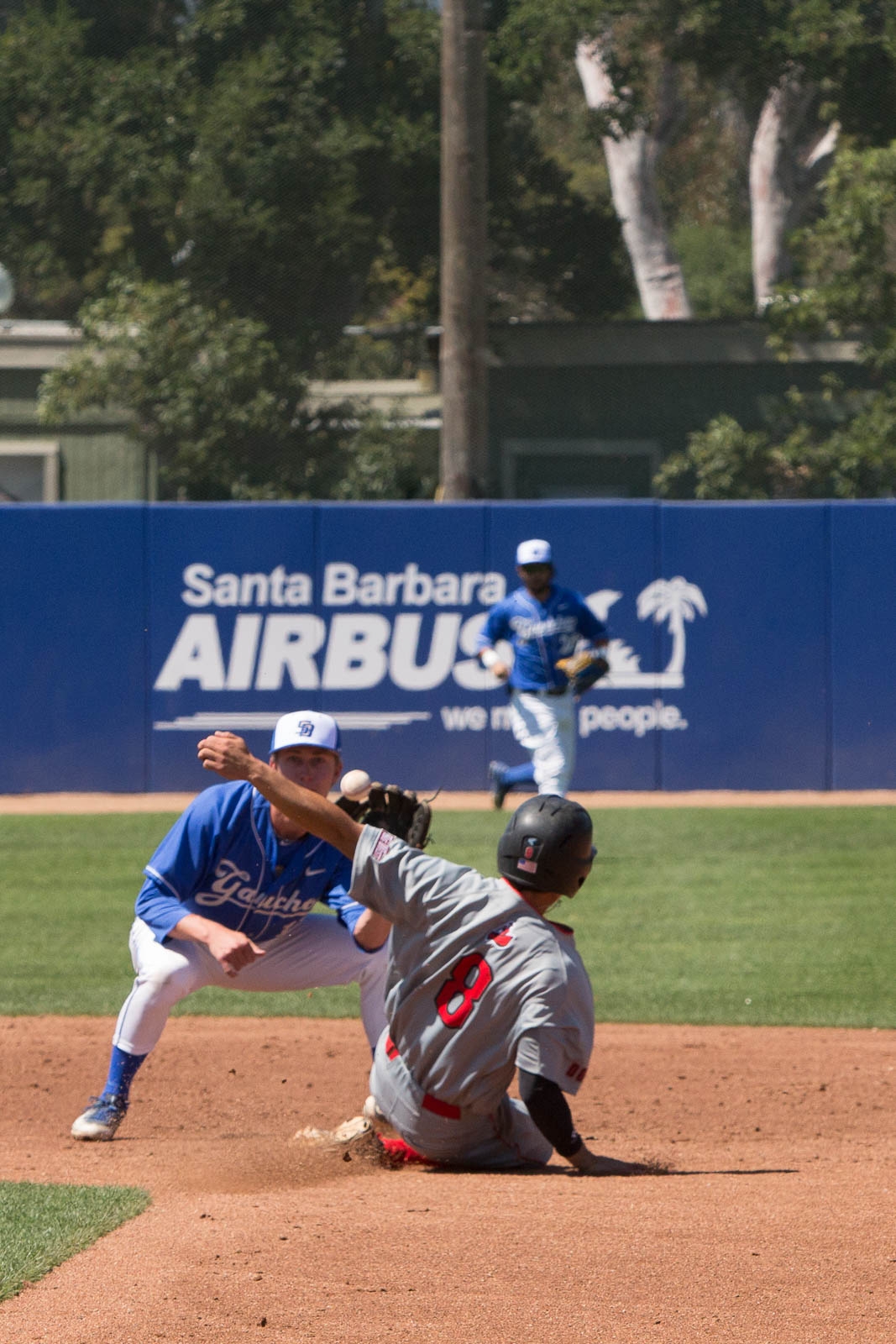 As another player slides into second base, Clay Fisher catches the ball. Dustin Harris / Daily Nexus

The Gauchos host their visitors boasting a 26-10-1 record, 5-4 Big West, and currently stand at fourth in the conference. The Rainbow Warriors come to beautiful, sunny, Santa Barbara with an 18-20 overall record, but have faired better in conference play with a 7-5 record.

After sweeping CSUN, the Gauchos were swept by green rival Cal Poly. They will now look to avenge their rough start to conference play when it takes on a solid opponent Hawaii.

Last season, Santa Barbara won the series after taking two of three from the Rainbow Warriors but is losing the series history which stands at 17-10. However, in recent years the Gauchos have taken 10 of the last 15 games.

Currently, UCSB is in the midst of a 13-game home winning streak and if it can take the first two games from Hawaii it will set a new school record for most consecutive home wins, 15.

Santa Barbara is also off to its best record at home start in school history at 17-1 beating its previous mark of 16-2 which was set in 1984.

In order to pull off the upset and beat an almost unbeatable Gaucho team at home, the Rainbow Warriors will need to rely on senior star Jacob Sheldon-Collins.

Currently, the shortstop has the second best batting average in the Big West with a .401, is tied for the conference leads in hits (57), and leads the team in on-base percentage (.443) and runs scored (20).

He is helped by freshman catcher Kekai Rios who has the sixth best batting average in the Big West at .339. This season, the young Hawaii native has also hit a game-winning home run this season. Sophomore first baseman Eric Ramirez leads the team in RBI with 26.

These great hitters will be facing off against pitcher Shane Bieber. The junior currently has a 3.30 ERA with a 7-2 record.

Bieber has pitched three straight complete games with the last one being his worst after going eight innings allowing seven runs and 13 hits. He will look to turnaround his performance and hopefully tie his career high, eighth win of the season.

The pitcher will also look to be helped by the great hitting staff of the Gauchos. Coming off a solid game on Tuesday is second baseman J.J. Muno.

The sophomore went 2-4 (.500) with two runs scored including the game-winner in the eleventh inning. He is tied for the team lead in home runs with four on the season and currently bats .269.

Another solid hitter is designated hitter/first baseman Austin Bush. The redshirt sophomore is first in RBI (26), first in slugging percentage (.475) and third in batting average (.308).

This weekend will be an interesting one for the Gauchos as they will need to go back to their winning ways and make a splash in conference play.

They were projected to finish fourth in the Big West in the preseason poll, however, the talent this team has and the determination it has displayed proves they have the capability to finish much, much higher.

UCSB faces-off against Hawaii Friday, April 29 at 3 p.m. at Caesar Uyesaka Stadium. Saturday’s and Sunday’s game will be at the same location but at 2 p.m. and 1 p.m. respectively.

[Correction: A previous version of this article said the Gauchos needed to sweep the weekend series to set the school record for most consecutive wins at home. The Gauchos only need to win the first two games to reach 15 straight wins, beating the previous school record of 14.]