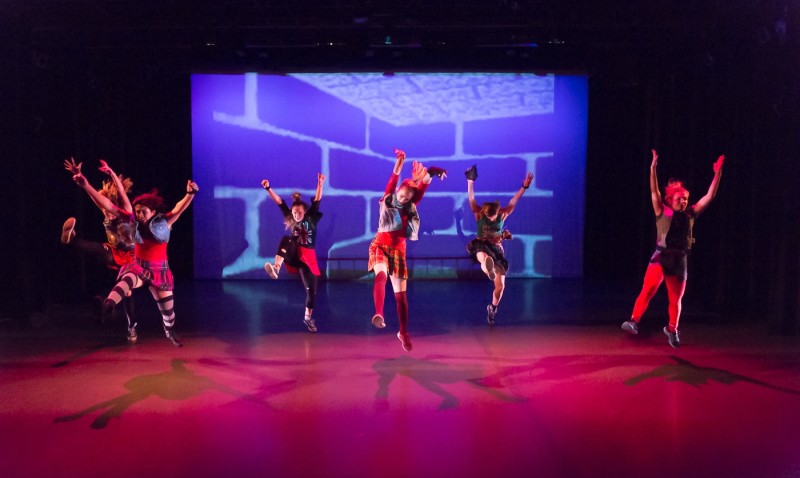 Although “Aspire” was his last show with UCSB’s dance department, Pearson stated that he will continue to choreograph after his retirement. His vast career with PDC and SBDT allowed him to reach nearly 150 astounding dance works.

The show opened with Pearson’s playful “Amuse Bouche” that translates as “mouth amuser” in French. The small bite-sized hors d’oeuvre that stimulate one’s appetite are reminiscent of Pearson’s dance, which only lasted six minutes, compared to the finale, which endured for 30 minutes. Pearson aimed for an energetic, short piece that succeeded in satisfying the audience to prepare for the rest of their meal, or, rather, the “rest of the show.”

The projections portrayed vivid backgrounds alternating from fruits to segmented body parts. The bright rainbow-colored  gradient strobed, reminding one of the rainbow ball of death loading on a Mac. The vivacious and dramatic lighting and backdrop contrasted with the dancers’ white costumes and shoes with small sections of color.

The theatricality of the piece can be attributed to the dancers’ infectious energy, interactive props like chef aprons and hats and text bubbles from the projections saying “Hey audience! We’re dancing for you!” Pearson explained how the “concept is basically that a choreographer is like a chef. The ingredients are time, space, energy and dancers.” He goes on to explain, “You have recipes and you put them together,” creating “one’s kinesthetic appetite.” From the acrobatic lifts and movements to the upbeat string music, the piece left the audience hungry for more.

The second piece began with music while three women prepared to dance in darkness. Pearson’s multifaceted nature is apparent in this piece as he was the choreographer, composer and cinematographer. His three C’s, combined with the dancers’ elegant and extended lines, which were emphasized by grey unitards, allowed the audience to experience a more tranquil experience compared to the opener.  Three spotlights flickered on and off as the dancers navigated the stage in the dark to find their formations. The spontaneous flickers of light gave the dance a sense of surprise and awe.

As the title implies, “Flutter” embodied the motions of birds, communicated through ethereal jumps and gestures. Projections of birds flowing in slow motion accentuated their movements with expansive and fluttering motions. Whether executing difficult sequential jumps or vibrating hand gestures, the dancers’ use of focus drew the audience into their journey.

The last piece before intermission, “Maze of Grace” (created in 1991) embodied all phases of anger. The first and last time the show was performed was at UCSB. The dance began with one senior dance company member screaming loudly, followed with the rest of the seven dancers joining her onstage. Their spunky hair and costumes were reminiscent of the punk 80s.

The trippy backgrounds of various depictions of colorful and complex mazes transported the audience to a different state of mind. The text slowly multiplied in number and grew larger, representing what the dancer may feel or what someone would say, ranging from, “Help!,” “Be happy?” to “Don’t worry.”

Their sharp movements were highlighted by using their bodies as percussive instruments. The ensemble utilized their voices to yell, “This is my personal space!” and morphed into a flurry of pushing and shoving. The dancer’s intricate footwork in a straight line with upbeat music can be attributed to their stamina. Slowly inching forward to the audience, the ensemble hunched over animalistically to scream into the audience’s faces. Retreating back to a more comfortable space for spectators, dancers assisted another to climb up a ladder. The dancers gathered around the one-sided ladder, which could have been disastrous if one imbalance occurred. As one dancer reached the top, a projection read, “Oh, I see.”

The grand finale, “Aspire,” was a large, 29-cast ensemble that lasted 30 minutes. Pearson wanted to create this piece for the dancers’ aspiring for “perfection.” As a professor, Pearson reflected on how he constantly sees dancers through the ages of 18-22 that are full of inspiration and desire to be the best.

Pearson wanted to go all out for his final piece performed at the Hatlen Theatre. “Aspire” displayed everything from dancers running through the aisles, three-story scaffoldings crashing against each other, nuces flung, tear gas disguised as fog machines, dancing puppets, to an array of projections throughout the piece. The ensemble of dancers wore army-green jumpsuits with various colors of knee-high socks and black boots that had the flexibility for pointing one’s feet.

Pearson intertwined a love story within the chaos of revolt, war and intergalactic discoveries. Within the never-ending chaos, Pearson paid homage to dances he has participated in, such as “Tensile Involvement,” created in 1953 by Alwin Nikolai. With Pink Floyd’s song “We Don’t Need No Education” along with the long elastic strings forming various geometric shapes as the dancers moved, these two features created an exciting viewing experience. From this section, Pearson accomplished a way of communicating antiestablishment in addition to honoring his past dancerly experiences.

With Pearson’s experience and expertise, audiences often gave “Aspire” standing ovations that is rightly deserved for him and his dancers. Pearson’s grand vision for his grand finale was accomplished through his innovative amalgamation of hip hop, intergalactic galaxies, love story during wartime, robots and puppets being controlled by dictators and, of course, the “pure joy of dance.”

Pearson’s breadth of work presented the best of himself contained in individual emotions, intentions and styles. Altogether the pieces shared Pearson’s expertise in incorporating multimedia projections and the pure joy of dance. Often this joy may be depleted by having to constantly worry about technique, but Pearson’s warm, positive and inspirational energy energizes dancers to perform their best.