The Daily Nexus
Literature
Bryan Stevenson Brings More than Just Mercy to Campbell
April 29, 2016 at 5:00 am by Dakota Maxwell 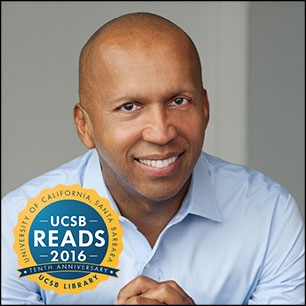 I walked into Cambell Hall and was immediately immersed in the bustle and murmur of the crowd. My eyes jumped to the blue lights on the stage and quickly skimmed the rows for an open seat.

The lecture hall quickly reached max capacity, and people were redirected to Buchanan to watch a live stream of the lecture done by Bryan Stevenson, an extremely influential and inspirational lawyer who spends his life working to bring justice to those least likely to receive it. He founded the Equal Justice Initiative to defend the poor and has spent a lot of time working with clients on death row. He is also the author of Just Mercy, this year’s UCSB Reads book.

The excitement and anticipation in the air were tangible, much louder in presence than the jazz music playing as people filed into their seats.

Stevenson said he wanted to talk about how he thinks we can change the world. He went on to explain the current prison and incarceration statistics, finishing with the daunting statistic that said one in three black baby boys born in the U.S. would go to jail in his lifetime.

The first thing he said we could do to change the world is get proximate to poverty in the community. He said that you cannot change the world from a distance, and only in proximity will you find power.

As Stevenson’s speech grew more fervent with emotion, the crowd responded more enthusiastically and dramatically to his remarks. People called out praise to him and were in agreement with his words.

He made a dramatic claim that as the Germans had marked the locations of the Holocaust in respect, we should mark the spots of lynching in this country so the ghosts of racism are visible to us.

Fourth and finally, he said we must be willing to do uncomfortable things. Many times his job has put him in pain or made him uncomfortable, but he persevered. He has realized that the reason why he does what he does it because he is a broken person; he works for broken people, and yet he is broken himself. Sometimes being broken gives us the edge we need to fight back.

Many people stood to ask him questions. A student spoke of how he was moved to tears more by Bryan Stevenson than by the death of his family; people stood to talk of their hardships or to question the hypocrisy of the UC system in working with Wells Fargo.

When he finished speaking, there was an awe-filled moment of silence before the massive crowd rose as one in a thunderous standing ovation.