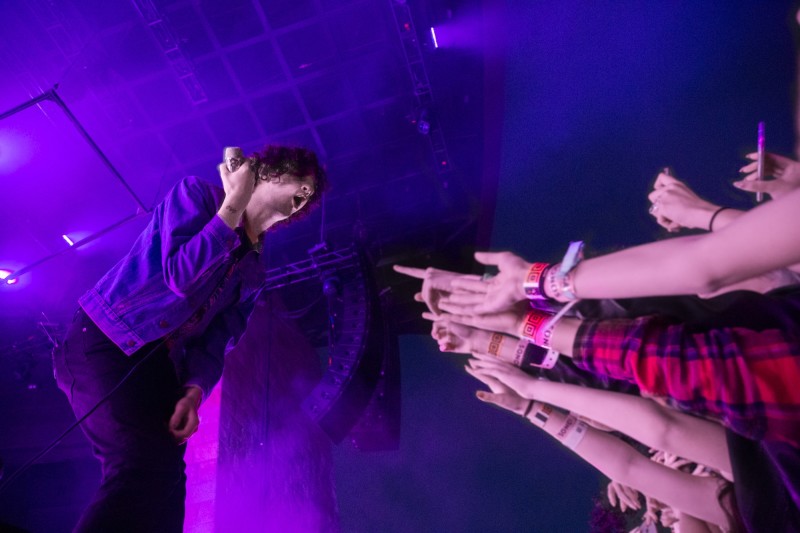 Extraordinary, phenomenal, unreal, rare and unimaginable are a few of the words that I sifted through in an effort to describe this experience, but these words alone could not even begin to do the night justice. As a method of reference, I looked to a review I wrote on The 1975’s performance at the Hollywood Palladium in 2014, but it was almost as if I were writing about a completely different band. There is no questioning that they have endured a grand artistic evolution as a band, but for those fortunate enough to attend the show, they were able to get a glimpse of just how much their change in persona has fed into their performance. 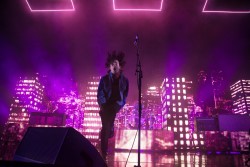 in broad daylight, she was the focal point of the place in its entirety from the minute she walked out. The mind behind the music, Amber Bain, quickly surfaced within the music scene after numerous forms of recognition from The 1975 band members and after their thriving fan base sought answers to who exactly The Japanese House was and what about her music made her so infatuating. Bain’s melancholic melodies are mysteriously tranquilizing, and they served as an ideal preparation for a long night to come.

In addition to being the only opener for The 1975 at the Santa Barbara Bowl, The Japanese House proved to be a matchless candidate to complete such a task. With songs like “Clean” and “Pools to Bathe In,” The Japanese House challenges the idea that every artist should be marked with a label according to their genre or sound. Bain’s music, like a fingerprint, is unique and complex to the extent that it would be nearly impossible to stick her with any label. Her music alone is numbing, yet it only intensified the experience that the audience was about to receive when the band that they all came to see took the stage. 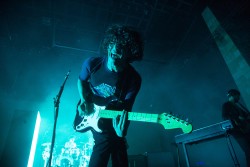 A familiar ringing pierced the air, and the crowd grew silent as they recognized the tone as the cue for the beginning of what may become the best night of their lives. Rather than just gracing the stage, frontman Matty Healy went the extra mile and rode a bike onto the stage, which Santa Barbara—a bike-friendly community—definitely appreciated. As someone who has attended several of its shows, I can say that the band’s overall aesthetic is overwhelmingly alluring and timeless with each passing show. This aesthetic breathes into their stage presence and produces a combination their visuals and their sound.

Like in most of their shows, there was a period of time in which the band performed their song “Me,” and Healy challenged everyone in attendance to live in the moment rather than trying to capture it with their phones. Although it proved difficult for some people, most obliged and could agree that it was one of the most memorable moments of the show. As the saxophone reigned in midway through the song, there was a moment when Healy lay against one of the visual boards, almost as if he were either drowning in colors or drowning in sadness. Whether the former or the latter, he sat there for a moment just being and bringing the entire crowd into existence. If the performance of the song alone was not enough to break down the metaphorical barriers between a band and a crowd, the following performance of their brilliantly lucid song, “fallingforyou,” tore down any feeling other than bliss in its wake.

The show as a whole consisted of songs off of both their self-titled debut album and their sophomore album, I Like It When You Sleep for You Are So Beautiful yet So Unaware of It. With this, the crowd was able to get a better understanding of just how essential each band member is to the success of the band and how influential they are to The 1975’s sound as a whole. In songs like “You” and “Menswear,” the performance made evident the mastery lying within bassist Ross McDonald, the fact that Adam Hann is indeed a menace on the guitar and the reality that someone like George Daniel can have hands that appear to be crafted for his intense drumming, yet a mind that produces immensely beautiful sounds. There is also Healy, who gives his all into a performance and makes being bare seem so easy. There was a moment in “Loving Someone” when Healy gazed into the crowd as if he were pleading with them to understand something he could not quite put into words, yet hoping they would take from both the song and the performance, which was something I am certain that a lot of people missed. But for those who did not, it will resonate with them for many years to follow. 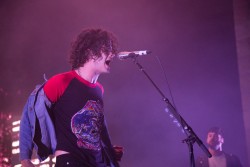 accurately alone. Its members make this evident in their music, their performance and their constant effort to give people the opportunity to understand them as musicians. They have been heavily influenced by a multitude of artists, including Prince, whom they paid tribute to during an intermission by projecting his face surrounded in purple onto a large screen while his song, “I Wanna Be Your Lover,” rang proudly through the speakers.

One could go on at length about what happened at the show or what they took certain things to mean, but it could never register the same for someone if they did not have the chance to experience it on their own. Seeing The 1975 live will make your heart ache for days to follow, but that pain is comforted by a sort of understanding that you could only receive from attending a show of this sort.