From the moment that a student-athlete enrolls full time in school, their five-year window of athletic eligibility begins to roll. In these five years, the student is allowed to compete up to four years while making progress toward their academic goals simultaneously.

Most student-athletes choose to make use of those four years starting their freshman season consecutively up to their fourth year, which is the usual period for undergraduates to complete their degrees. 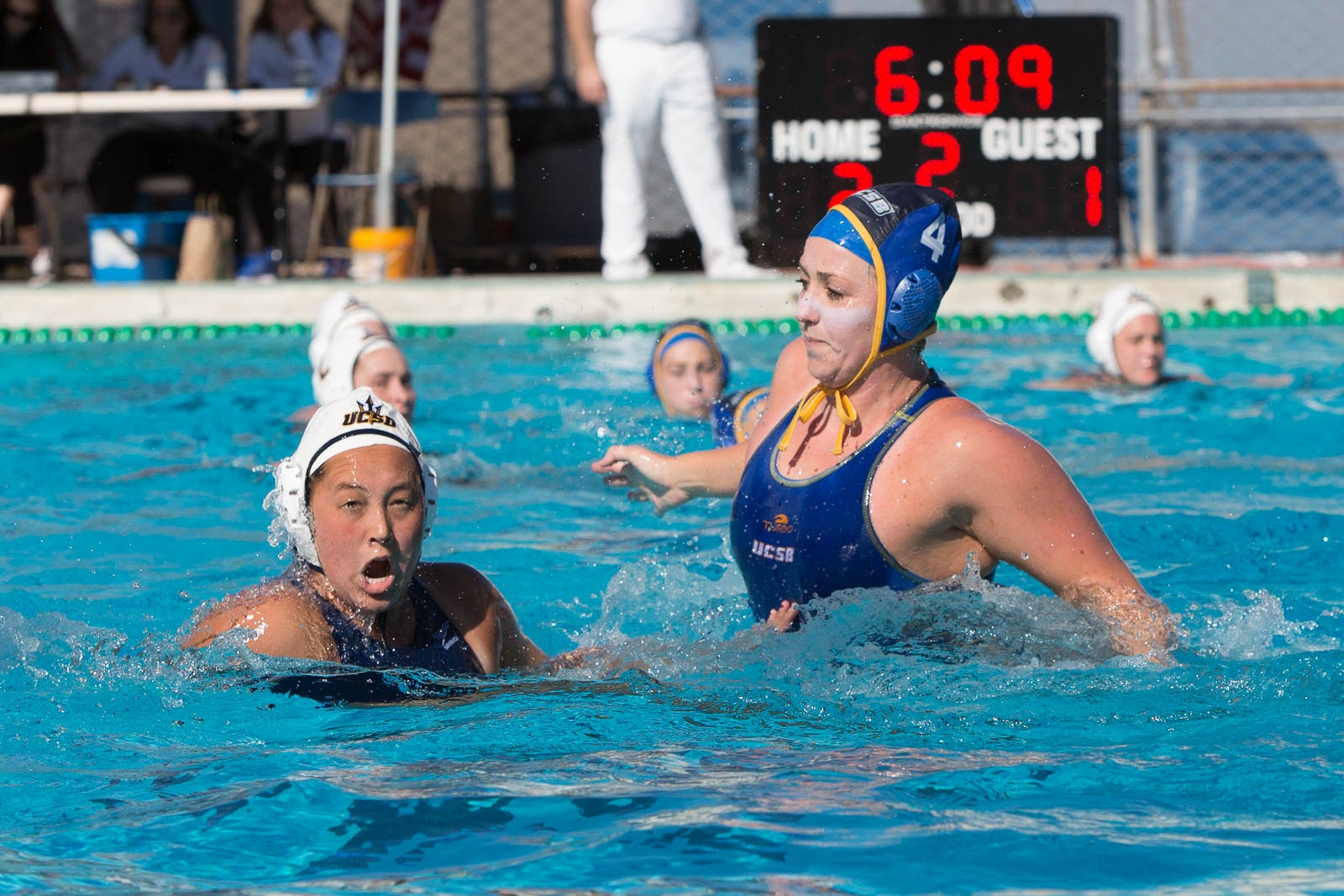 After propelling herself from the water, Lauren Martin tries to block a shot on goal. Dustin Harris/Daily Nexus

However, others might use what is called a redshirt season. In this year, the player may practice with the team, but must sit out against outside competition. Reasons for redshirting a year varies from one athlete to another.

For some athletes the decision isn’t always up to them, but rather necessary due to an injury that prevents them from playing competitively, which is certainly not an uncommon phenomenon amongst Division I athletes. Others may choose to take advantage of that extra year to work on their skills so that they may gain more playing time in their sport for the upcoming season.

Yet neither of these reasons apply to senior center Lauren Martin of the UCSB women’s water polo team.

The Clovis West High School graduate joined the Gaucho family after a very successful high school career in which she earned seven varsity letters both in water polo as well as swimming. She is a two-time All-American, collecting First Team honors as a senior and Fourth Team accolades as a junior.

It was no surprise that after all of those merits, the freshman went on to play in all 35 games in her first season, generating 29 goals and 13 assists and finishing the season with an impressive shooting percentage of .392. Martin also led the team in earned penalties and ejections with a high count of 47 that year. The two following years were as productive as the first, contributing 24 and 33 goals her sophomore and junior season, respectively.

Playing time was not a problem for Lauren who had certainly earned her spot as the team’s center player; however, coming into her fourth season she decided to take a year off.

“The reason why I redshirted last year is because I had certain goals for myself and I felt that I would meet those goals if I took off a year and just trained,” Martin said. “We had a new coach and I wanted to try and figure out her coaching style and also because our team was very young.”

Train she did, and it certainly paid off. Although players continue to assist practice and play against their own teammates, not participating in games against outside competitors can deteriorate some athletes’ skills.

Yet, this was not the case when it came to Martin.

Right from the start of this season, her presence made such a significant impact on the team. In her first game back against Cal, she put away four goals alone, proving that she had been waiting to be back in the pool with her teammates for a very long time and seemed determined to make the most of her senior campaign.

“She’s been sitting for over a year waiting to play,” Head Coach Serela Kay mentioned in an interview earlier this year. “She’s excited, and we’re excited to have her back in the paint to fill that role and she’s doing great.”

Even after her outstanding performance that weekend, it remained unpredictable just how “great” she would continue to do throughout the season and how much of an influence she would have on the team.

“I didn’t really have the mindset of ‘Oh I hope I do well,’” Marin said. “It was just what was expected, out of the whole entire team, even, not just myself.”

The 5’10” center finished her last season with UCSB as the team’s leading scorer with 45 goals and a striking shooting percentage of .517, feats that helped her to earn Big West Player of the Week honors twice this season.

However, the importance of her contributions to the team were not only in the amount of goals that she would put away each game, but also in their timing.

On several occasions, Martin came in clutch when the team needed her the most. She had a couple of game-winners, some occurring in overtime, which would give the Gauchos the victory in addition to being a catalyst that occasionally sparked the team when it needed to recoup in dire situations.

“Whenever I go in the game, it is my job to get a goal or set a teammate up with a really nice pass or earn an ejection so that someone else can score,” Martin said modestly. “My mindset going is to give 110 percent every time I go in the water.”

Nonetheless, the senior might attribute some of her collegiate success both in and out of the pool to her earlier years when she participated in the Olympic Development Program.

The program’s purpose is develop players that will represent USA Water Polo throughout domestic and international competition. With such high expectations and the effort that is required of all athletes, the experience was beneficial beyond the depths of the pool, helping individuals improve as everyday people.

“It showed me commitment, and just going into those practices knowing that you have eight hours of practice ahead, but knowing that it will all pay off in the long run teaches you determination,” Martin said. “It also helped with time management, knowing that I had a long practice ahead and I had to plan for school and other stuff I had to do.”

While her career at UCSB might be over after the Big West Tournament, Martin hopes to continue doing what she loves in the future. While nothing is set in stone yet, word has it that this powerful player will be taking her talents overseas.

A version of this article appeared on page 10 of April 28, 2016’s print edition of the Daily Nexus.