The Daily Nexus
Tennis
Greatness Comes in Pairs
April 27, 2016 at 5:00 am by Xavier Cardenas

Time and time again we are told that hard work pays off, to keep our nose on the grindstone and to continue to move forward. It is the belief in the process, and the process alone, that elevates individuals to new heights and to new places. 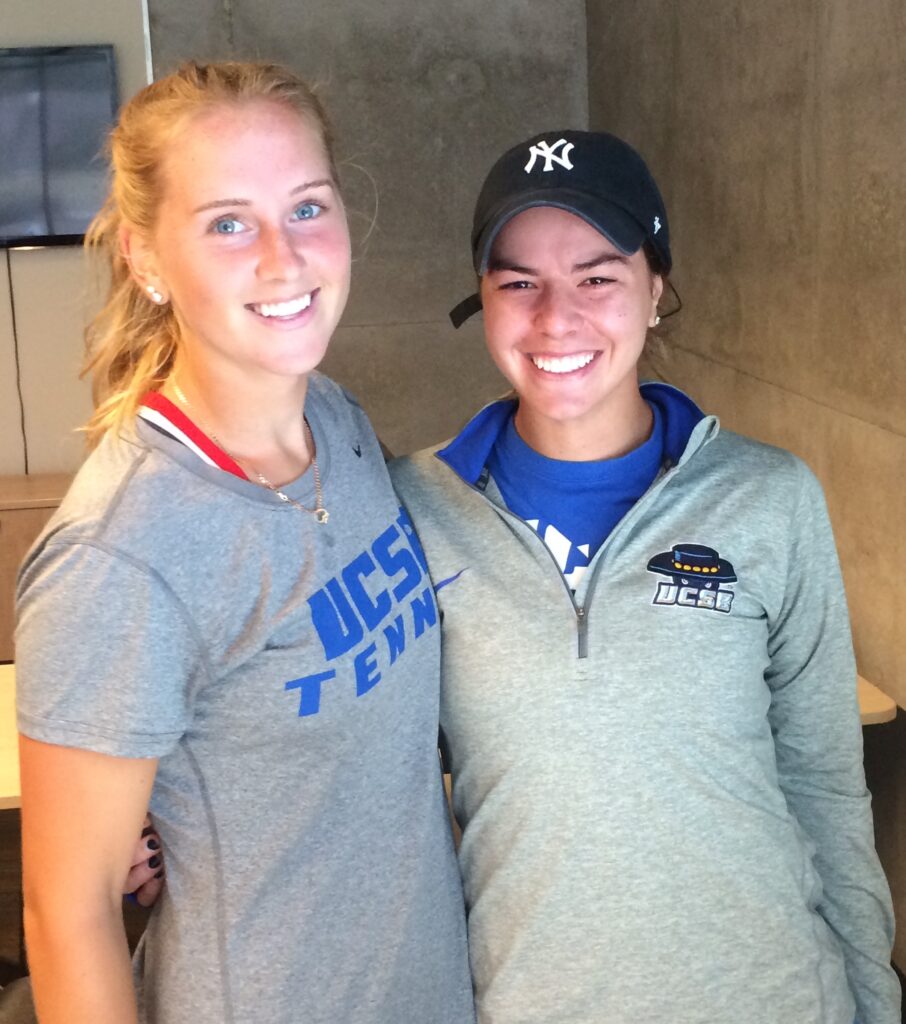 This is the case for the 20th-ranked ITA doubles pair and UCSB’s newest members of the women’s tennis team: sophomore Palina Dubavets and junior Stefani Stojic.  These two young transfer students are tremendous and have made quite an impact on UCSB’s tennis program just in their first year. At only 19 and 21, respectively, the duo has already experienced much more than many of us hope to, traveling to parts of the world many of us might never see all thanks to a sport that has now brought them stateside.

Tennis, much like many other sports, requires a passion, dedication and vision to compete at a high level. For these two, competing at a high level is nothing new, and playing at a Division I NCAA level is just another accolade, another bullet point on their highly impressive resumes.

For these emerging tennis stars, playing the sport of tennis began around the same age most of us were first learning our arithmetic or how to tie our shoes. Even as children, Dubavets and Stojic knew that delivering a potent serve or a strong swing would be more than just a pastime.

Dubavets, originally from Minsk, Belarus, began playing tennis at the age of seven. A few short years later, she realized what the sport could possibly mean for her and her family.

“Tennis became the goal for me when I was around 10, then at 12 my parents moved to another city because of tennis, so it became really serious for me. It was taking up a lot of time,” she said.

With her family rallying behind her, Dubavets did not take long to prove that their sacrifices would not be in vain. She was selected to represent her native country of Belarus in the 2011 Junior European Championships, and to this day, it continues to be one of the most memorable moments of her tennis career.

Her first time around, she made it to the third round in singles before eventually falling to current professional tennis player Viktoriya Tomova from Bulgaria. In doubles, it was a similar story as she lost to a Ukraine native in the third round.

The following year, Dubavets and her partner, Iryna Shymanovich, made it to the semifinals of the same tournament. However, thanks to her persistence, and with the help of her fellow compatriots, Belarus reached a world stage by qualifying for a world tournament for the first time in nearly 20 years.

Yet, despite what she was able to provide for her country, she did not receive the backing of her federation to the degree others were.

“It came to a point around 16 years old when there was trouble with money and the federation was helping only the best of the best,”Dubavets explained. “That made it hard to make it to a lot of the tournaments, so that’s when I decided to go to college.”

A new target was set in between her sights, and after a couple of goodbyes were exchanged,Dubavets took a risk and found herself surrounded by new people in a new country playing the same game she has always known.

She was brought to Texas Christian University’s team, a program that was ranked No. 17 in the nation at the time, by first-year Coach Lee Taylor Walker and Assistant Coach Ben Stapp.

Dubavets’ time was brief, but she still managed to play in a total of 60 matches in her first year in both singles and doubles play. In singles, she recorded a 17-10 overall record along with recording a 19-14 doubles record.

After just one year at TCU, Palina decided it would be in her best interest to look for a fresh start out West. Her search for a new place to call home came to a close once she became acquainted with UCSB’s elite coaching staff, stellar academics and sunny California weather.

“Two main reasons to come here: the coaches and academics. I had to be really sure that the coaches were really good because they take a lot of time from your life, so I had to make sure there was a good chemistry,”Dubavets said. “Academics are definitely a lot better here at UCSB than TCU, and the location and climate is really good for tennis.”

Able to complete the transfer process and be welcomed to the UCSB women’s tennis program with open arms, Dubavets became another international asset to Santa Barbara’s program.

Entering UCSB with similar intentions of a fresh start, Australia native Stojic was determined to contribute to the Gauchos’ recruiting progress.

Stojic picked up the tennis racket at an early age and has yet to put it down. Since then, she has made quite an impact in the tennis community by creating an extensive resume of her own.

“I started when I was seven. It got pretty serious, and then from there it was just playing under Australia and representing Australia through all those International Tennis Federation and junior tournaments,” she said.

After years of training, her junior career culminated during the 2011 Australian Open whenStojic faced some of today’s tennis stars.

During the main draw of the girl singles competition, she was pitted against Klara Fabikova from the Czech Republic.

Today, Fabikova plays for the Golden Bears of Cal and is ranked No. 12 in the nation according to the Intercollegiate Tennis Association. Stefani managed to demonstrate what she is capable of by defeating a young Fabikova 6-3 in two consecutive sets.

The following round, Stojic competed against Monica Puig who is currently ranked top 40 in the world in the pro circuit, and the experience that Stefani had with her is something she has yet to forget.

After participating in junior competitions, Stojic, like her fellow Gaucho transfer teammate Dubavets, made a decision to go to college because of the financial hardships that come with participating in tournaments at an elite level.

So instead of going pro right after high school, she decided to pursue tennis at one of the best tennis programs in the country, the University of Florida, is currently ranked third in the nation.

“Honestly, I didn’t know I was going to go to college,” Stojic said. “I thought I was going to jump into professional tennis, but financially it was too hard to travel. So, I came to college looking to get better and get a degree.”

Just like most professional athletes can attest to, the journey is not a simple one, it is a process of stumbling and overcoming any obstacles.

After two years of being underutilized at the University of Florida, Stojic decided to take her talents to Santa Barbara.

“I didn’t get to play much, and we had a really strong team at the University of Florida,” Stojic explained. “We had eight players and it was always hard to get into the lineup. I personally want to go pro after college, so for me, it was important to get a load of matches and playing so I can go pro. So I was trying to find a school that I knew I would be playing top in line and get good quality matches every week consistently.”

Playing time and opportunity have definitely been afforded to both Stojic and Dubavets here at UCSB. Regardless of all the chances that might be offered, it is up to the athlete to ensure that their production equals or even surpasses expectation in order to ensure a spot.

The two definitely have not disappointed as they have helped the Gauchos amass their season-high national ranking of No. 65 earlier in the season. They have been an important staple for UCSB’s young roster as the two are currently the team’s leaders in wins in singles and doubles at the one slot.

When it comes to doubles action,Stojic and Dubavets have been a force to be reckoned with, losing only twice this season. They also have had an undefeated record against other top ranked doubles duos, having defeated No. 7 Gabby Smith and Giuliana Olmos of USC earlier in the year.

Thus far, Stojic and Dubavets have thrived at the collegiate level, reaching a high doubles ranking albeit playing together for just one year. Competing together has come naturally as the two have meshed quite well with an impeccable chemistry on and off the courts.

“We are both aggressive players with a good serve, and it’s just a really good mix, so it’s all been pretty easy,” Dubavets said. “There is a lot of chemistry and confidence between us”.

“It’s been pretty easy, because our game styles are pretty similar and our personalities as well. It’s been chill, all very chill when we play together,” Stojic agreed.

These two, along with the rest of the currently No. 74 ranked UCSB women’s tennis team, are players to keep an eye on as they prepare for the Big West Championships beginning this Thursday, April 28th, with hopes of making it to the NCAA Tournament.

Aside from excelling at the collegiate level, Stojic and Dubavets are aiming to do what their competitors have already done.

“I still definitely want to turn pro afterwards, give it a good two years and hopefully get a sponsor that can help me work and travel and make it on the pro side” Stojic said.

The outlook for both players is tremendous as they have another year to work together. As long as they maintain the faith in the process, they will only continue to grow as athletes in the sport of tennis.

It is not every year that two talented individual players with similar backgrounds and expectations of the sport can come together and play with something to prove. But sometimes, just sometimes, greatness comes in pairs.