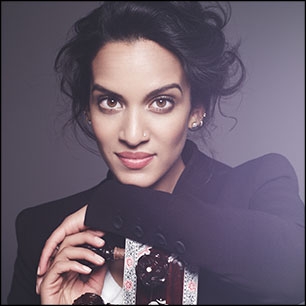 The stage lights dimmed to a faint glow as Anoushka Shankar sat onstage and picked up her sitar. The murmuring chatter of the audience began to die down until the only perceptible sound was a steady note from the ensemble’s backing track. The ensemble waited with readiness at their instruments as Shankar gently tuned her sitar. She paused, then with a graceful flick of her wrist she began to fill the theater with clear, plucking notes.

Anoushka Shankar brought her intricate skill and her international musical background to Campbell Hall on Monday night with a concert celebrating her new album Land of Gold. The renowned sitar player and composer has been performing since age 13 and has received five Grammy Award Nominations. Her original compositions seek to use the traditionally Indian sitar across various genres and in both classical and modern styles. Land of Gold seeks to bring cultures together.

The concert was dynamic and varied throughout, with changing styles, different combinations of instruments and rapidly shifting tones. The fast tempo and mixture of instruments in “Secret Heart” got the audience’s feet tapping from the start. Sanjeev Shankar’s high, clear notes on the shehnai kept pace with the quick plucking of the sitar in perfect harmony. Manu Delago added lower harmony on the hang with smooth tapping from one end of his instrument to the other. During the quiet interludes of the song, the drawn-out notes of the shehnai provided a dramatic difference from the pounding beat and full sound.

“Dissolving Boundaries” began with gentle notes from the sitar, creating a relaxing atmosphere. As Shankar began increasing the tempo of her strumming and plucking, Tom Farmer’s soft piano notes joined in rhythmic melody. The building combinations of instruments in harmony were intercut with moments of only slow sitar plucking. Suddenly and jarringly, the music was interrupted by a news sound bite playing, a newscaster reporting on an influx of refugees in a professional tone. The musicians continued playing as the sound bite faded to become part of the background rhythm, melding into the song. Shankar had included the newscast to express the larger theme of her album. She explained, “The process of making this music was in response to the current refugee crisis.”

The hardships of refugees and the themes of fear and the unknown were explored further in “Crossing The Rubicon.” Shankar described her ideas of people crossing the Rubicon River or refugees travelling to a new country as people “going all the way.” She said solemnly, “This music is an interpretation of what it must be like for those people.” The song began slowly and ominously with a delicate melody on the hang and slow sitar strumming, creating a mournful tone. The tempo and volume began increasing gradually as Shankar’s notes on the sitar became more harsh and pronounced. The building music created an increasing feeling of suspense. The sudden burst of booming bass and pounding drums filled the theatre in the song’s climactic moment, as though mimicking the rush of fleeing people.

The entire ensemble truly demonstrated their rapid skills during “Last Chance.” Quiet trills from Shankar’s sitar and occasional booms from Farmer’s bass created a mysterious atmosphere in the song’s opening. Unexpectedly, a quick pounding beat from Delago’s small, hand-held drum signaled the beginning of a jolting tempo increase. Shankar’s hands flew up and down the sitar with lightning fast precision, bringing the audience to their feet with applause. Quick, powerful bursts from the bass added body to the pulsing rhythm that vibrated throughout the theatre. The fluidity of Shankar’s notes increased as lights flashed around the theatre, resembling a rock concert.

As the cheering and whistling from the audience began to die down, Shankar introduced her last piece, smiling as she said, “I’m trying to end with a little bit of hope.” The song, “Reunion,” expressed a lighthearted tone with its major key and quick, light plucking on the sitar. Delago’s soft beat complimented the gentle melody and left pauses for Shankar’s sitar to pierce the stillness with clear high notes. All instruments in the ensemble came together at the song’s end along with a prerecorded chorus of voices to create a sense of unity.

Land of Gold expressed an intersection of antiquity and progressiveness, of home and places unknown and of Western and Eastern music. Shankar’s compositions and their use of both traditional Indian instruments and innovative musical techniques represented the complexity of the artist herself while also creating varied musical narratives. Anoushka Shankar’s Land of Gold was a dynamic melding of style, culture and intricate talent.